Earlier this week, Stephen Marche published a thought-provoking piece in The New York Times entitled, “How to Read Racist Books to Your Kids.”

I empathized with the issues he faced—I’ve also felt ambushed by racist imagery when reading classic children’s books to my multiracial child—and I was sympathetic to his viewpoint.

But ultimately, Marche just seems flummoxed by the problem. “How am I supposed to explain to a child the superimposition of cultural generalizations onto toy cars and monsters and space aliens?” he writes. “I can barely explain it myself.”

Neither can I, really. But I think Marche is much too quick to dodge tough questions about kids and race. His bottom-line answer to the question in the title is, “Don’t—don’t read racist books to your kids”—and if you do, you should excise racist language and imagery. I saw this response echoed by followers on Twitter when I shared his piece.

The trouble with this answer is that it assumes books are either racist or they are not—and if they are, the solution is to simply ignore them. But as a parent and as a journalist who covers scientific research into the roots of prejudice, I don’t believe that’s the best plan, in reading or in life.

Some books, like The Story of Little Black Sambo, are obviously too explicitly racist to bother reading, but since those are often out of print and off library shelves, they are the red herrings of this debate. Because the truth is that there are many very good children’s books which are, like people, often a mix of the bad and the good. 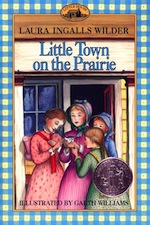 Take the Little House series, for example—wonderful stories that my wife and I have read aloud to our son since he was five. A woman born in the 19th century and raised on the American frontier, Laura Ingalls Wilder, wrote these books. They are the product of a time and a place, and we are reading them across a span of time that makes the stories strange to us.

Thus there are portrayals of African and Native Americans that seem stereotypical; many of the characters in the books are casually, bluntly white supremacist in their attitudes. In one passage in Little Town on the Prairie, for example, Laura’s father—a good man—participates in a minstrel show with grotesque racial caricatures, and Laura refers to the performers as “darkies.”

At the same time, however, there are elements in these stories that confound our own stereotypes of the time—characters like the African-American doctor, based on the real-life George Tann, who saves Laura, her family, and her neighbors from malaria in 1870. A black doctor treating whites in 1870? Who is, indeed, the only doctor—and likely the most educated man—in the region? In the narrative, Laura notes his race but doesn’t dwell on it. Tann is less strange or unexpected to her than he might be to us. This is part of the value of reading old, classic stories—discovering how people of past times lived and saw the world, and taking the good with the bad.

But even granting that reality, the question remains: How do we help our children navigate obsolete racial attitudes and stereotypes that will, if internalized, hurt their ability to navigate multiracial 21st-century America—and even hurt them, if they are kids of color? Here are three tips, largely distilled from the Greater Good anthology I co-edited called Are We Born Racist? New Insights from Neuroscience and Positive Psychology. Each one arises from scientific research, but I’ve put them to the test in my parenting, messy and imperfect as that is.

1. Openly discuss the existence of race and racism.

Colorblindness doesn’t work. We know this because many, many neuroscientific studies show that race is one of the first things we perceive about a person, and that encountering people of different races can produce a spike of anxiety. Children don’t pretend to not see differences in skin color, eye shape, and hair texture. When adults do that, we only confuse them.

Fortunately, psychological studies also find that perceiving difference does not necessarily lead to racism. Done right, it can actually lead to many good outcomes, including increased emotional, cognitive, and social sophistication.

Prolonged exposure to people of different races helps reduce anxiety—this is the famed “contact hypothesis,” and the reason why it’s very good to raise children in multiracial environments. But it might be even more important to openly identify and discuss feelings about people who are different from us, to make ourselves conscious of kneejerk responses so that our conscious brains can take over and regulate unconscious bias. Children can be trained to do this from a very early age—teaching impulse control is, in fact, fundamental to childrearing. This is just one more example of that.

How is that insight operationalized in my parenting?

Long before our son was exposed to ambiguous racial imagery in books like the Little House series, we read him children’s books about black, Asian, Native American, and Latino history, especially ones that show how non-White peoples were treated at different times in American history. These include Ruthanne Lum McCunn’s trilingual Pie-Biter, Diana Cohn’s ¡Si, Se Puede! / Yes, We Can!, Richard Michelson’s Across the Alley, and Mary Pope Osborne’s Magic Tree House series, which does a pretty good job of dealing with race and racism in historical context. Each of these books reveals, to some degree, the realities of racism, while also giving children heroes—people throughout history who have struggled against prejudice.

This, I hope, is the framework my mixed-race son brings to encounters with yellow menace imagery in the old comic books that I love reading to him. And when we encounter a “slant-eyed, Oriental mastermind” (to quote one old comic of mine), I stop, close the book, and tell him that image is a product of prejudice, and that I think prejudice is wrong. I try to answer any questions he has. Then I re-open the book… and keep reading.

2. Emphasize our capacity to grow and change.

Speaking of comic books: Ever hear of the superhero team Thunderbolts? They’re a group of Marvel supervillains who are trying to reform themselves and put their powers to use in saving the world. I love the Thunderbolts—as well as other morally complex comic characters like Wolverine, Catwoman, Silver Sable, and more—because they reveal an essential human truth: few of us are pure good or pure evil. “Good” people can do bad things, and “bad” people can do good things—and perhaps become a force for good in the world, no matter what bad they did in the past.

That’s a message that also emerges from new discoveries in neuroscience. It’s a message readers hear again and again in our anthology Are We Born Racist?: “Research consistently shows that we can override our automatic associations through our behavior, and can even unlearn our automatic associations with enough practice,” writes co-editor Rodolfo Mendoza-Denton. “Thus we’re not simply either egalitarian or prejudiced; egalitarianism is a learned skill.”

This is a message kids need to hear—not just when it comes to countering prejudice, but in all areas of life. Psychology calls it the “growth mindset,” and its message is simple: You will grow and you will get better with practice—and so will other people. When we encounter Oriental masterminds in the comics of yesteryear, I emphasize to my son that what was OK then is not OK now. I often connect this process of change to the political activism we’ve read about in other books, like Freedom on the Menu: The Greensboro Sit-Ins. Just like individual people, societies can learn and improve. But only if we speak out!

These moments are also excellent opportunities to develop empathic skills, which both scientific studies and common sense say can help reduce bias. We can, for example, ask how it might make black people feel, to be told they couldn’t eat or drink in certain places, just because they were black—or to see the minstrel shows like the one in Little Town on the Prairie.

“To understand prejudice and the brain,” writes psychologist David Amodio, “one must take the brain (and the mind) for what it really is: a survival machine.” It’s designed to search for threats, which could come from people outside the tribe.

But the brain also evolved to negotiate complex social interactions and to override automatic impulses. “The brain cannot be anti-racist, per se, because it never stops spotting differences and sorting people into categories,” writes Amodio. “But it is pro-goal—and if the goal is to make judgments without regard to race, the brain can do that, though it may take a bit of effort and practice.”

The point is that we should encourage children to adopt fairness as a goal, and to not reject people just because they look different. Reading a children’s book with racist imagery and ideas provides an excellent opportunity to reiterate the importance of that goal.

And in this, we are again helped by evolution. In his essay, “Political Primates,” the anthropologist Christopher Boehm argues that the human drive for equality has deep evolutionary roots and is, in fact, the norm for most of primate history. This is a finding echoed in neuroscience, which has identified egalitarian impulses co-existing with fear and prejudice in the brain. The trick is to foster one and diminish the other.

As we report every week here at Greater Good, many, many studies have suggested that human beings are wired for altruism, compassion, and empathy. Group identification can limit those qualities and prevent us from extending them to people outside the tribe, but that’s no reason to throw up our hands in defeat. The challenge—and the opportunity—is to provide our kids with the messages and the social environments that elicit their natural impulses for fairness.

Even if human nature is not quite the ally I hope it is, the basic point stands: We have to ask our children to adopt fairness to all people as a goal, and to call out unfairness when we encounter it in one of their books, movies… or inside ourselves. Research says the more explicit we are with children about that struggle, the better.

I personally think people look into things a little too
much…but we MUST know when to draw the line.
Good article.

I’m reading the “Little House” series to my six-year-old daughter right now, and since we’re in “Little House on the Prairie” I’ve had to deal with how to read about the interactions with and attitudes towards Native Americans in a way that preserves the author’s voice and doesn’t just feed the stereotypes.

My solution is two-part: I stop after reading a problematic passage and we discuss it, and I also slightly edit the language. For example, I add words like, “man” “woman” and “people” after the word “Indian”. It’s amazing how much that simple addition does to humanize instead of other the Native Americans in the book. I’ve also made other small changes like adding “language” or “words” for when it’s talking about Native Americans speaking.

I’m still not entirely satisfied with that as a solution, but I think it’s better than losing the series of books entirely, and it ensures that my daughter can bring that understanding to other times she sees depictions of Native Americans, whether in books or on-screen.

I am late getting to see this article but wanted to say that I think it’s excellent. Tackles a very complex set of issues in a thoughtful, educationally helpful way by linking to other writings and thoughts about the subject. Very sophisticated treatment of a crucial topic, I think.
Thank you.
Carolyn Cowan