Nestled in the golden, foggy hills above the San Francisco Bay, a sculpted strand of DNA—1.2 billion times its actual size—sits in the courtyard of the Lawrence Hall of Science, a children’s science museum at the University of California, Berkeley. My two-year-old son loves to climb all over this steel and plastic replica, and I always chuckle at the ingenuity of the double helix as a play structure. The sculpture’s giant proportions have always seemed appropriate to me: The discovery of DNA stands as one of the largest achievements in the annals of science.

But while few would dispute the extraordinary significance of DNA, there’s a great deal of controversy over its role in determining the traits, behaviors, and skills that make each of us unique. This controversy becomes heated when it focuses on differences between groups, particularly when it comes to matters of intellect and academic achievement. 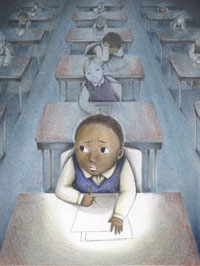 Last fall, one of the world’s leading authorities on DNA chose to weigh in on one of the most contentious aspects of this issue: the relationship between race and intelligence. In an interview with The Times of London, James D. Watson, whose work identifying the architecture of DNA earned him a Nobel Prize in 1962, said he was “inherently gloomy about the prospect of Africa.” He went on: “All our social policies are based on the fact that their intelligence is the same as ours—whereas all the testing says not really. … People who have to deal with black employees find this not to be true.”

Coming from someone else, it may be easy to dismiss such remarks as ludicrous. Yet when the co-discoverer of the double helix claims that people of one race are innately inferior to others, we cannot so easily put his comments aside. Can we learn anything from Watson’s remarks?

The answer is yes. The lesson, however, lies not so much in his comments as in the assumptions hidden beneath them—assumptions about how and why groups perform differently from one another.

Watson was right that tests have indeed documented performance differences between racial and ethnic groups. In the United States, we refer to these performance differences as “achievement gaps,” with some groups (European and Asian Americans) consistently outperforming others (African Americans, Latinos) on standardized tests. These vexingly persistent gaps can be found across all levels of schooling, from National Assessment of Educational Progress (NAEP) scores in elementary school to SAT scores in high school to professional school tests, such as the GREs and LSATs.

But how we explain these differences plays a vital role in determining how we should address them. And it’s here that Watson went so far astray. He traced these differences to genetics, when research shows that’s just not true. They’re really the products of prejudice.

Minding the gap
Watson’s insinuations about the “inherently gloomy” prospects of Africa rest on two faulty assumptions. The first assumption is that intellectual ability, as surely as our hair color or the shape of our nose, is fixed and innate. The second is that our tools for measuring this ability—such as IQ tests or standardized exams—are faithful gauges of it, like thermometers are for temperature.

Watson’s not alone in holding these beliefs; they’re endorsed and actively used in our culture in not-so-subtle ways. Our educational system tracks students according to “ability” levels. College and private high school admissions officers rely heavily on standardized test scores for their acceptance decisions. The inevitable conclusion from these assumptions—the one reached by Watson—is that if the tests point to group-based differences, those differences must be deeply ingrained in who we are. Indeed, a former president of Harvard, Lawrence Summers, once pointed to “issues of intrinsic aptitude” as the root of gender differences in math achievement.

Research in psychology, however, reveals that these tests are not immune to pernicious influences of prejudice. Psychologists Claude Steele and Joshua Aronson, for example, presented African- and European-American students with questions similar to those one might find on a standardized test. In the first condition, researchers told one group of test takers that the tests were designed to gauge their intellectual ability. In the second condition, another group of students was given the same set of questions, but told that the researchers were interested only in the psychological processes involved in problem solving and would not assess the participants’ ability.

This is not an isolated result. Other experiments show something similar happens with gender: If men and women are told that a math test is designed to show gender differences, women reliably don’t do as well as men. But if the same test is presented as simply measuring math skills, those differences suddenly disappear. Given that these experiments use identical tests, the findings flatly contradict the notion that math ability is innately different between men and women. If that were the case, researchers wouldn’t be able to eliminate test score differences simply by changing the way the test is presented to students.

How can a small change in the framing of a test lead to such dramatic differences in performance, and why are some minority students and women (at least in math) particularly sensitive to such frames? Steele and his colleagues have proposed that these situations activate a “stereotype threat,” whereby concern about being evaluated against, or perhaps even confirming, a negative stereotype makes people anxious and disrupts their ability to concentrate. Lift this threat and performance differences disappear.

This research suggests that stereotypes and prejudice can, in subtle but powerful ways, affect the data that is then used as “evidence” for the stereotypes’ very existence. In other words, people such as James Watson point to poor test scores to affirm their own prejudices against African Americans. But these prejudices are contributing to the poor test scores, which then feed the prejudices. It is a vicious cycle, and it is played out across a wide variety of settings. Whether one is an older person learning how to operate a computer, a woman learning a new scientific procedure, or an African American taking the GRE, negative stereotypes can affect people in ways that seem to confirm these very stereotypes.

It can be very difficult, particularly within our culture, to appreciate the fact that intellectual performance can be so malleable. On websites and in magazines, we are heavily drawn to IQ tests that promise to reveal how smart we “really” are. Yet we, along with Watson and Summers, fail to see how prejudices and negative expectations can help determine the results of these tests.

Think different
So what can we do about any of this? People often believe that, like our intellectual abilities, our prejudices are deeply entrenched in our genetic makeup and are unlikely to change. Yet again, research shows that our prejudices are quite malleable, and highly determined by social conditions. Social relationships are a key factor in shaping our prejudices. Relationships with people from many types of groups reduce prejudice, decrease social anxiety, and help generate positive experiences between groups.

Studies suggest cross-group friendships are especially effective for improving relations between groups. For example, research by social psychologist Stefania Paolini and her colleagues shows that people who form friendships with a member of a different group are much more likely to hold positive attitudes toward that group, even among people who have experienced violence as a result of conflict between those groups.

But do these friendships actually affect people’s attitudes? Or are people who hold more positive attitudes toward another group just more likely to befriend people from that group?

In my own research, my colleagues and I found evidence for the actual impact of cross-race friendships. We took study participants who were initially prejudiced and facilitated friendships between them and people of another race. When we tracked their contact with other groups over time, the participants reported spending more time with people of other races. On the other hand, when we facilitated friendships between prejudiced participants and people of their own race, they reported no changes in contact with members of other groups. More recently, we have also found that when minority college students form cross-group friendships, they later feel a greater sense of belonging and satisfaction toward their university.

Although we can’t induce cross-race friendships in real life in the same way that we do in the laboratory, certain conditions raise the odds of these friendships developing (as Susan Fiske makes clear in her essay “Look Twice”). One of these conditions is the approval and support of authorities or institutions—for example, when universities take deliberate steps or adopt policies to make such contact possible, such as minority recruitment or social events designed to bring groups into contact with each other. Another condition is that members of different groups must enjoy equal status. That is, they should all feel equally valued and welcome in a social setting.

It is ironic that by tracking and ranking students, our schools not only reinforce notions of fixed ability; they make some students feel more valued than others, and communicate to students that those in authority do not condone contact across tracks or ability groupings.

We owe the tools of success to all of our students—not just those who we originally assume are going to succeed. Luckily, the way we think about abilities is not permanently inscribed in our genes. It is within our power to change whether our nation’s students see ability and intelligence as fixed or as something that can be improved with effort and hard work. In a powerful demonstration of this, psychologist Lisa Blackwell and her colleagues showed seventh-grade students how the brain grows and makes new connections when we learn, much like muscles becoming stronger. The exercise reminded the students that “You can grow your intelligence.” In subsequent testing, these students improved their math achievement across the difficult transition to junior high school, whereas another group of students, who had not been exposed to Blackwell’s lessons, showed a decline.

In another study, which specifically focused on the gender achievement gap among adolescents, psychologist Catherine Good and her colleagues used a similar procedure to teach students that math skills are malleable, rather than fixed, and found that gender differences in math performance disappeared.

The good news is that we can reduce achievement gaps by teaching students that their academic ability is something they can work on, not something fixed by their DNA. The better news is that these interventions also seem to “lift all boats”—that is, everyone’s achievement seems to benefit. And the best news may be that changing students’ notions about fixed ability may itself lay the groundwork for reducing prejudice: If genes alone don’t dictate how smart we are, it makes much less sense to believe that people’s ability depends on their race, ethnicity, or gender.

Outside Berkeley’s Lawrence Hall of Science, the kids seem to agree that when climbing the DNA sculpture, the goal is to scale from one end to the other without touching the ground—a deceptively difficult feat given that the molecules twirl into a double helix. My young son can’t pull it off yet, but I try to remind him that he wasn’t born knowing how to climb. His missteps and falls don’t mean he can’t do it, just that he’s learning how.