The latest Greater Good anthology, Are We Born Racist? New Insights from Neuroscience and Positive Psychology is now out, just published by Beacon Press. To coincide with its release, we’re featuring a sneak peak at some of the contributions to the book, including this eye-opening essay by educator Dottie Blais. To learn more about Are We Born Racist?, click here.

One Friday morning, right after teaching my third period English class, I came face-to-face with my own racial and cultural prejudices. 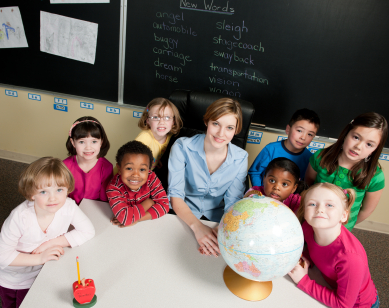 I had just delivered a well-intentioned diatribe about the consequences of not doing homework. I couldn’t understand why so many 10th graders were simply not reading their short story assignments, or if they read them, were showing so little enthusiasm in class discussions.

One student, Julian, had remained in his seat after I dismissed the class. I sensed he had something to say.

Finally, he stood up and approached the desk. Julian was a tall, African-American 16 year old with intelligent eyes, one of my favorite students.

“You ought to quit trying to make us white,” he said matter-of-factly. “All these stories you’re making us read are by white people, about white people.” His eyes pointed to the open textbook on my desk.

“Julian, I didn’t select these stories on the basis of race,” I said emphatically, stunned by the implications of racism. It was the unpardonable sin in a school where 70 percent of the students were ethnic minorities.

“Maybe you should have,” he said, almost in a whisper, and left the classroom to silence.

I struggled to comprehend. His suggestion was inconceivable, especially since I had always prided myself on conducting “colorblind” classes.

I picked up the textbook and turned to the table of contents. Scanning titles and authors, I suddenly realized the awful truth. I hadn’t deliberately eliminated writers of other ethnicities, but I hadn’t deliberately included them either. Clearly, the assignments reflected my own unconscious cultural biases, and one student had the courage to say so.

Like many other well-intentioned educators, I had fully embraced the concept of colorblindness. In theory, the approach sounds good. In a world where racial conflict has been such a problem, why wouldn’t colorblindness—with its attempt to remove race from the classroom altogether—be the perfect way to ensure that racism never rears its ugly head?

What I didn’t realize until the incident with Julian is that colorblindness has an ugliness of its own. The paradoxical truth, according to a 2004 study by Northwestern University psychologist Jennifer Richeson and her colleague Richard Nussbaum, is that the ideology of colorblindness may cause more rather than less racial bias, a result that echoes other research findings.

How is that possible? To understand how a perspective intended to avoid racism in the classroom can actually encourage racism, educators must examine their own motives for employing the strategy, and several recent studies of colorblindness can help them do so.

Teachers may believe, as I once did, that if they could somehow not see the race of their students, then they couldn’t possibly be racist. However, a wave of new research has found that one of the first and most automatic ways people respond to others is to categorize them by race, even if they wish it were otherwise. In other words, achieving true colorblindness is virtually impossible.

To deny what they inevitably see, many people employ what researchers call “strategic” colorblindness, a strategy that requires maintaining an Orwellian perspective on race—that is, seeing and not seeing at the same time—to avoid the appearance of racism.

This is a recipe for disaster. In fact, a 2006 Psychological Science paper by Harvard University psychologist Michael Norton and colleagues reveals just how much this race-denying strategy can impair interracial communication. In one of their studies, white college-age students were randomly paired with a black or white partner (actually a confederate in the study, working with the researchers). Together they played a “Political Correctness” game: The white student had to examine 32 photographs that differed in three ways: by the gender of the subject, the color of the background, or the race of the subject. The black or white partner was given six of these 32 photos, and the object of the game was for the white “questioner” to identify the individual photos the “answerer” was looking at by asking as few yes/no questions about the photos as possible.

When whites were paired with whites, they were quick to ask about the race of the person depicted in each photo. But when they were paired with a black partner, they were significantly less likely to invoke race, even if their failure to do so meant scoring poorly in the game.

What’s more, when whites tried to avoid mentioning race to black partners, their nonverbal behavior would change for the worse—they’d make less eye contact, for instance—and their communication in general would seem less friendly. Whites simply would not risk being perceived as racist, even though ignoring race in the game negatively affected their performance and their interactions with their partner.

A 2008 study published in the Journal of Personality and Social Psychology took Norton’s research a step further, examining the effects that whites’ attempts at colorblindness had on black participants. Ironically, the negative nonverbal behaviors exhibited by “colorblind” whites were interpreted by blacks as signs of prejudice, making them suspicious of their partners. It is hardly surprising that racial tensions increased among participants.

What do these research findings mean for educators who truly want to avoid racism in the classroom? It seems clear that adopting a colorblind perspective, though often well-intentioned and arguably a step in the right direction, does not actually combat prejudice among students and faculty; instead, it exacerbates racial divisions. We should abandon this practice. In its place, research suggests that a multicultural perspective, encouraging recognition and celebration of differences, is much more likely to reduce racial tensions and promote interracial communication. (See this Greater Good essay by Jennifer Holladay for more on the multicultural perspective.)

In retrospect, I can understand why Julian and other minority students in my English classroom were seething with resentment. By refusing to acknowledge that they were different from me, I elicited suspicion and discomfort. What’s more, I insulted their racial and cultural identity. My colorblindness signaled to them that they were invisible, somehow unworthy of my attention and my curriculum; my efforts were perceived as an attempt to “whiten” them.

Julian was right. If I had chosen to acknowledge race in my classroom, I could have intentionally developed a curriculum that was more inclusive. I could have provided an opportunity for students of all races to explore their own cultures through literature that extended and enriched the traditional canon. I could have used diversity as a learning opportunity for everyone in the classroom, including myself.

Julian taught me that if we choose not to acknowledge race in the classroom, students and teachers will rarely confront their own prejudices. Tolerance results from seeing commonalities. But unless we first see ourselves as different, we will never see ourselves as the same.

My friend tried to get a job as a pressman in the printing industry, but was disqualified after taking a color blindness test.  This type of thing needs to be discovered early to help job placement later in life.

our eyes is a grace ..
we shold be thankful all the time that we still have it working right ..