Since its release last month, Inside Out has been applauded by critics, adored by audiences, and has become the likely front-runner for the Academy Award for Best Animated Feature. 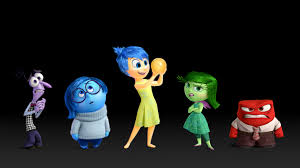 But perhaps its greatest achievement has been this: It has moved viewers young and old to take a look inside their own minds. As you likely know by now, much of the film takes place in the head of an 11-year-old girl named Riley, with five emotions—Joy, Sadness, Anger, Fear, and Disgust—embodied by characters who help Riley navigate her world. The film has some deep things to say about the nature of our emotions—which is no coincidence, as the GGSC’s founding faculty director, Dacher Keltner, served as a consultant on the film, helping to make sure that, despite some obvious creative liberties, the film’s fundamental messages about emotion are consistent with scientific research.

Those messages are smartly embedded within Inside Out‘s inventive storytelling and mind-blowing animation; they enrich the film without weighing it down. But they are conveyed strongly enough to provide a foundation for discussion among kids and adults alike. Some of the most memorable scenes in the film double as teachable moments for the classroom or dinner table.

Though Inside Out has artfully opened the door to these conversations, it can still be hard to find the right way to move through them or respond to kids’ questions. So for parents and teachers who want to discuss Inside Out with children, here we have distilled four of its main insights into our emotional lives, along with some of the research that backs them up. And a warning, lest we rouse your Anger: There are a number of spoilers below. 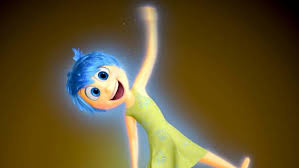 1) Happiness is not just about joy. When the film begins, the emotion of Joy—personified by a manic pixie-type with the voice of Amy Poehler—helms the controls inside Riley’s mind; her overarching goal is to make sure that Riley is always happy. But by the end of the film, Joy—like Riley, and the audience—learns that there is much, much more to being happy than boundless positivity. In fact, in the film’s final chapter, when Joy cedes control to some of her fellow emotions, particularly Sadness, Riley seems to achieve a deeper form of happiness.

This reflects the way that a lot of leading emotion researchers see happiness. Sonja Lyubomirsky, author of the best-selling How of Happiness, defines happiness as “the experience of joy, contentment, or positive well-being, combined with a sense that one’s life is good, meaningful, and worthwhile.” (emphasis added) So while positive emotions such as joy are definitely part of the recipe for happiness, they are not the whole shebang.

In fact, a recent study found that people who experience “emodiversity,” or a rich array of both positive and negative emotions, have better mental health. The authors of this study suggest that feeling a variety of specific emotions may give a person more detailed information about a particular situation, thus resulting in better behavioral choices—and potentially greater happiness.

For example, in a pivotal moment in the film, Riley allows herself to feel sadness, in addition to fear and anger, about her idea of running away from home; as a result, she decides not to go through with her plan. This choice reunites Riley with her family, giving her a deeper sense of happiness and contentment in the comfort she gets from her parents, even though it’s mixed with sadness and fear.

In that light, Inside Out’s creators, including director Pete Docter, made a smart choice to name Poehler’s character “Joy” instead of “Happiness.” Ultimately, joy is just one element of happiness, and happiness can be tinged with other emotions, even including sadness.

2) Don’t try to force happiness. One of us (Vicki) felt an old, familiar frustration when Riley’s mother tells her to be her parents’ “happy girl” while the family adjusts to a stressful cross-country move and her father goes through a difficult period at work. As a child, Vicki got similar messages and used to think something was wrong with her if she wasn’t happy all the time. And all the research and press about the importance of happiness in recent years can make this message that much more potent. 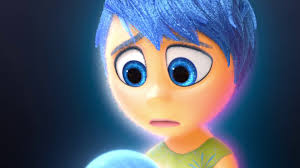 Thank goodness emotion researcher June Gruber and her colleagues started looking at the nuances of happiness and its pursuit. Their findings challenge the “happy-all-the-time” imperative that was probably imposed upon many of us.

For example, their research suggests that making happiness an explicit goal in life can actually make us miserable. Gruber’s colleague Iris Mauss has discovered that the more people strive for happiness, the greater the chance that they’ll set very high standards of happiness for themselves and feel disappointed—and less happy—when they’re not able to meet those standards all the time.

So it should come as no surprise that trying to force herself to be happy actually doesn’t help Riley deal with the stresses and transitions in her life. In fact, not only does that strategy fail to bring her happiness, it also seems to make her feel isolated and angry with her parents, which factors into her decision to run away from home.

What’s a more effective route to happiness for Riley (and the rest of us)? Recent research points to the importance of “prioritizing positivity”—deliberately carving out ample time in life for experiences that we personally enjoy. For Riley, that’s ice hockey, spending time with friends, and goofing around with her parents.

But critically, prioritizing positivity does not require avoiding or denying negative feelings or the situations that cause them—the kind of single-minded pursuit of happiness that can be counter-productive. That’s a crucial emotional lesson for Riley and her family when Riley finally admits that moving to San Francisco has been tough for her—an admission that brings her closer to her parents.

3) Sadness is vital to our well-being. Early in the film, Joy admits that she doesn’t understand what Sadness is for or why it’s in Riley’s head. She’s not alone. At one time or another, many of us have probably wondered what purpose sadness serves in our lives. 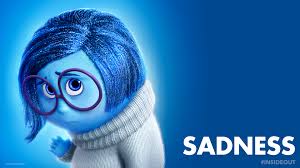 That’s why the two of us love that Sadness rather than Joy emerges as the hero of the movie. Why? Because Sadness connects deeply with people—a critical component of happiness—and helps Riley do the same. For example, when Riley’s long-forgotten imaginary friend Bing Bong feels dejected after the loss of his wagon, it is Sadness’s empathic understanding that helps him recover, not Joy’s attempt to put a positive spin on his loss. (Interestingly, this scene illustrates an important finding from research on happiness, namely that expressions of happiness must be appropriate to the situation.)

In one the film’s greatest revelations, Joy looks back on one of Riley’s “core memories”—when the girl missed a shot in an important hockey game—and realizes that the sadness Riley felt afterwards elicited compassion from her parents and friends, making her feel closer to them and transforming this potentially awful memory into one imbued with deep meaning and significance for her.

With great sensitivity, Inside Out shows how tough emotions like sadness, fear, and anger, can be extremely uncomfortable for people to experience—which is why many of us go to great lengths to avoid them (see the next section). But in the film, as in real life, all of these emotions serve an important purpose by providing insight into our inner and outer environments in ways that can help us connect with others, avoid danger, or recover from loss.

One caveat: While it’s important to help kids embrace sadness, parents and teachers need to explain to them that sadness is not the same as depression—a mood disorder that involves prolonged and intense periods of sadness. Adults also need to create safe and trusting environments for children so they will feel safe asking for help if they feel sad or depressed.

4) Mindfully embrace—rather than suppress—tough emotions. At one point, Joy attempts to prevent Sadness from having any influence on Riley’s psyche by drawing a small “circle of Sadness” in chalk and instructing Sadness to stay within it. It’s a funny moment, but psychologists will recognize that Joy is engaging in a risky behavior called “emotional suppression”—an emotion-regulation strategy that has been found to lead to anxiety and depression, especially amongst teenagers whose grasp of their own emotions is still developing. Sure enough, trying to contain Sadness and deny her a role in the action ultimately backfires for Joy, and for Riley.

Later in the film, when Bing Bong loses his wagon (the scene described above), Joy tries to get him to “cognitively reappraise” the situation, meaning that she encourages him to reinterpret what this loss means for him—in this case, by trying to shift his emotional response toward the positive. Cognitive reappraisal is a strategy that has historically been considered the most effective way to regulate emotions. But even this method of emotion regulation is not always the best approach, as researchers have found that it can sometimes increase rather than decrease depression, depending on the situation.

Toward the end of the movie, Joy does what some researchers now consider to be the healthiest method for working with emotions: Instead of avoiding or denying Sadness, Joy accepts Sadness for who she is, realizing that she is an important part of Riley’s emotional life. 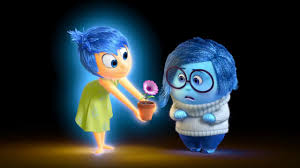 Emotion experts call this “mindfully embracing” an emotion. What does that mean? Rather than getting caught up in the drama of an emotional reaction, a mindful person kindly observes the emotion without judging it as the right or wrong way to feel in a given situation, creating space to choose a healthy response. Indeed, a 2014 study found that depressed adolescents and young adults who took a mindful approach to life showed lower levels of depression, anxiety, and bad attitudes, as well as a greater quality of life.

Certainly, Inside Out isn’t the first attempt to teach any of these four lessons, but it’s hard to think of another piece of media that has simultaneously moved and entertained so many people in the process. It’s a shining example of the power of media to shift viewers’ understanding of the human experience—a shift that, in this case, we hope will help viewers foster deeper and more compassionate connections to themselves and those around them.