We keep hearing about this new science of the brain and everything it can reveal about how our minds work, from how we make decisions to who we choose to love. But according to Richie Davidson, the distinguished neuroscientist and founder of the Center for Investigating Healthy Minds at the University of Wisconsin, Madison, when it comes to our emotions, the brain is a two-way street: While our brain shapes our emotional lives, we can also influence our emotional makeup through concentrated effort. 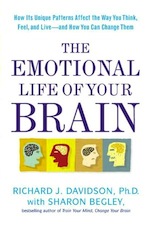 In his new book with journalist Sharon Begley, The Emotional Life of Your Brain, Davidson distills decades of research on the neurological bases of emotions. He claims that there are six dimensions of emotional style—resilience, general outlook (positive or negative), social intuition, self-awareness, sensitivity to context, and attention style (the ability to screen out distractions)—each reflecting activity in specific brain circuits and structures. All of us, he writes, fall somewhere along a continuum between high and low on each of these dimensions, and much of this depends on how our brains are wired.

Much of the book provides an overview of the research that led Davidson to this model—his early years at Harvard, the antagonism he encountered when he suggested studying emotions, and his eventual pioneering work in the field. Many know of Davidson’s study with Buddhist monks, in which he hooked them up to fMRI machines and studied what happened to their brains as they meditated. This study and others helped show that conscious effort can change neural structure and activity.

Davidson’s scientific stories can be quite entertaining. But for those of us who just want the practical stuff, there are two chapters of interest, one devoted to self-assessment and another devoted to techniques for shifting your emotional style.

So, for example, if you are someone with a negative outlook on life, you probably have low activity in the pleasure and reward centers of the brain, and low activity in the prefrontal cortex. If you want to increase your positive outlook—and you don’t want to use drugs—here is one thing he recommends: “When you find yourself in a situation in which you are tempted by an immediate reward but you know the smarter, safer, healthier, or otherwise better choice is to wait for a future reward of higher value, pause and focus on the more valuable future reward.”

In other words, don’t go for that extra brownie just because it looks good now. Instead, train your brain to avoid temptation and you will have a more positive outlook on life.

This advice would sound absurd coming from most people. But the guy knows his stuff. Apparently, focusing on delayed gratification is a way you can engage the prefrontal cortex to increase activity in your reward centers, which leads to a more positive outlook on life. If you find this incredulous, Davidson provides the neurological research to back it up.

Most of the other suggestions he makes for tweaking one’s emotional style come down to practicing mindfulness meditation. Apparently self-awareness, attention, and focus can all be increased with mindfulness, a prescription made in the past by many others—Sharon Saltzberg and Jack Kornfield among them—with much more specific instructions, though without the nifty science experiments.

Still, it’s fascinating to see how far the neuroscience of emotion has come since the time Davidson was pooh-poohed for studying it. What the book may lack in specific prescriptions it makes up for with its inspiring proof that we can use our minds to change our brains.

I’ll give this a read.  I’m a research sctieinst myself and ever since I read a book called Molecules of Emotion in college I’ve had my eyes opened to the science and biochemistry that are the scaffolds of how we feel.  The ideas we drape over those scaffolds are our own and to some extent malleable   this is just my idea of it of course.  So this book you’re reviewing seems like it would be an interesting twist on this, or a different but compatible angle.The thing that disturbs me a bit about this is that, as a research sctieinst reading the findings of other research sctieinsts, we have to acknowledge that in our labs and while poring over data and reaching conclusions, we are still subject to these bits and pieces forming our reality .  The research that tells us we are absorbing bits and pieces was done by those who, if correct, are also absorbing bits and pieces [though understanding that I myself don’t glance at data as if it were a traffic scene, but rather revisit it many times and pass it off to others for their input and later have it peer reviewed by others who do similar work, etc].  However we are all still subject to the ruling biases of our day.  Visual perception, mathematical logic’  heck, even the way we like to visualize or present our data can skew the perceived meaning and import.So each time I read books such as these, I wonder what more there is behind the story that we haven’t grasped quite yet.  Should we take it as fact, or as an interesting idea to ponder and use as further interesting dressing for our scaffold.  And I also wonder if, in a millennium,  we’ might look back at this in the same way we look now at early spontaneous generation and animicule research: quaint, on an interesting path and directly around a corner from a new and, at the moment, unimaginable discovery. Just a thought.