We all know that physical health depends on a good diet and exercise. But recent research suggests that it also comes from a regular dose of positive emotions.

Now a new study goes one step further, not only showing that positive emotions improve health but identifying precisely how they have this effect: by making people feel more socially connected. 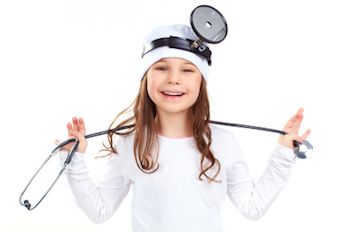 In the study, published online in Psychological Science, researchers divided 65 people into two groups. One received training in the ancient practice of loving-kindness meditation; the other was put on a waiting list for the meditation training. All of the participants were faculty or staff at the University of North Carolina at Chapel Hill. None had any prior meditation experience.

The researchers chose loving-kindness meditation because, they write, “it teaches individuals how to cultivate feelings of love, compassion, and goodwill toward themselves and others.” The participants in the meditation group attended one hour-long class per week for six weeks, which they were asked to supplement with daily practice at home.

Each day during the training period, and for two weeks beforehand and one week afterward, participants in both groups were asked to report on the amount of time they’d meditated, the emotions they’d felt most strongly that day, and the quality of their social interactions.

The researchers also assessed participants’ health before the training started and after it ended. To do that, they took readings of participants’ heart rate and breathing patterns—a way of measuring their “vagal tone,” or the activity of their vagus nerve, which regulates heart rate. Vagal tone has been linked to cardiovascular health, and the researchers viewed it as a good objective measure of physical well-being.

Compared with people on the waiting list, people in the loving-kindness meditation group showed greater increases in positive emotions like amusement, awe, and gratitude over the course of the training. And the people who showed greater increases in positive emotions were also more likely to feel more socially connected over time, saying they felt closer and more “in tune” with the people around them. Those feelings of social connection, in turn, were linked to improvements in vagal tone.

These results offer some of the strongest evidence to date that positive emotions can enhance physical health, but they suggest that simply experiencing positive emotions on their own isn’t necessarily enough. Instead, the key factor is the effect positive emotions have on our sense of connection to others. This study is the first to show how social connectedness provides the important link between positive emotions and better health.

According to the authors, who were led by Bethany Kok and included Barbara Fredrickson, the study is also the first to show that vagal tone isn’t simply a fixed characteristic; instead, “although vagal tone is largely stable,” they write, “it can also be improved through sustained enhancements in an individual’s emotions and social perceptions.” In fact, they found that even a modest amount of practice cultivating positive emotions could drive significant changes in vagal tone—and, in effect, physical health.

All of these findings are important because they suggest that we can take relatively simple and practical steps to improve our own health. The results should encourage people to “prioritize how and how often we connect with other people,” says study co-author (and former GGSC fellow) Tanya Vacharkulksemsuk, even by doing things as simple as “picking up the phone or sending a text.”

And if we can’t connect with other people at the moment, we may be able to achieve a similar effect by cultivating positive emotions on our own. As we experience more positive emotions over time—whether through loving-kindness meditation or dwelling on positive memories or doing activities we enjoy—we may be taking care of our bodies as well as our minds.

“Recurrent momentary experiences of positive emotions appear to serve as nutrients for the human body,” they write, “increasing feelings of social belonging and giving a needed boost to parasympathetic health, which in turn opens people up to more rewarding positive emotional and social experiences.”