San Francisco Halloween, 2003: As my wife and I round a corner onto crowded Market Street, we stumble upon a swarm of teenage boys punching and kicking another young man who had rolled into a ball on the ground.

The encounter can’t last more than five seconds, yet time freezes to a stop. So does my body. So do the bodies of all the people around us, though I’m not aware of that at the time. No one moves to intervene. We seem totally isolated from each other, but somehow we bystanders still manage to cooperatively form a corridor that allows the beating to sweep past us. 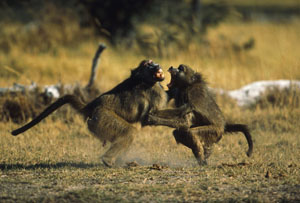 Scientists have looked to other primates for the roots of human violence, but other research finds the potential for peace. © Winfried Wisniewski

Time and the street racket start again when the attacking mob suddenly breaks up and dissolves into the crowd of Halloween revelers. The target of the assault jumps to his feet, shaken and bruised but not seriously hurt.

“Are you OK?” I ask, forcing myself forward. “What happened?”

Dazed, he doesn’t answer; he, too, fades into the crowd, and I am left standing alone on Market Street, people carousing around me. If you had asked me the following morning if I thought human beings were born peaceful, I probably would have said no. And to this day, I am haunted by my own inaction. What could I have done, I ask myself, to make that terrible situation better?

No detail of this story or its aftermath would surprise Randall Collins, author of Violence: A Micro-Sociological Theory, or Malcolm Potts, primary author of Sex and War: How Biology Explains Terrorism and Warfare and Offers a Path to a Safer World. Both books, in different ways, expose the nature and banality of the kind of violence I witnessed that night. The authors start at opposite ends of the intellectual spectrum—one looks to society for explanations of violence, the other to biology—but they arrive at similar conclusions: Violence is neither inevitable nor fixed, but subject to environmental and situational pressures, a phenomenon that is within our power to diminish.

In Sex and War, physician and family- planning activist Malcolm Potts and his co-author, journalist Thomas Hayden, trace the roots of violence to primate evolution. Violence, they argue, almost always takes the form of aggression by teams of young males who systematically seek out weaker opponents—a pattern I saw in action on Halloween, and one, the authors explain, often found in other primates, like chimpanzees. Both chimps and humans are prone to dividing themselves into in-groups, whose members are capable of tremendous altruism toward each other, and out-groups, who are dehumanized (or, I suppose, “de-chimpified”) as “the others.”

Males who wield violence against outgroups and to dominate other males in the in-group improve their chances of transmitting their genes to the next generation. Females, says this evolutionary narrative, will instinctively seek the protection of the most violent males. Romance ensues, but overly successful baby-making means population growth—which, in turn, makes resources more scarce, triggering competition and conflict between groups.

“War and violence, then, are indelibly linked to sex and reproduction,” write Potts and Hayden. This leads them to conclude that female sexual empowerment and reproductive freedom (as opposed to the competition induced by the male libido) is the key to reducing the threat of war. According to this analysis, violence for males is easy and frequent, and must be subdued by the power of peaceable, empathic females. This is a variation of the harrowing moral universe of Thomas Hobbes, the 17th century philosopher who proclaimed that “every man is enemy to every man.”

It’s a familiar argument—overly familiar, in fact, but given a progressive twist by the book’s emphasis on family planning. Potts is a heroic figure, having traveled through some of the world’s most war-torn regions treating rape victims and fighting to increase access to birth control, and Sex and War does not lack for citations of scientific research or historical background. Unfortunately, however, Potts and Hayden simply ignore a great deal of new research that does not fit within their Hobbesian, gender-essentialist worldview.

For example, Potts and Hayden do not explore recent (sometimes controversial) work by researchers such as anthropologist Douglas Fry, biologist Joan Roughgarden, primatologist Frans de Waal, and psychologist Michael McCullough, who have all argued, from within their respective disciplines, that mastery of violence is not necessarily the most important factor in primate reproductive success; forgiveness, kindness, empathy, and humor can be just as crucial for negotiating conflict and securing resources. This blind spot makes Sex and War’s male-centered, tooth-and-claw portrayal of evolutionary processes seem old-fashioned and oversimplified. Potts and Hayden also neglect the work of military psychologists who have presented persuasive evidence that killing is never easy, even for young men, a fact militaries around the world recognize and strive to overcome. According to these converging lines of research, it is training and circumstances, not biology, that turn human teenagers into killers. 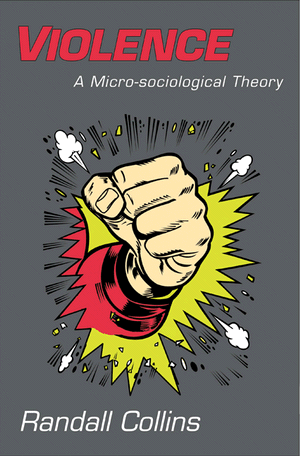 That is a view shared by sociologist Randall Collins. His book Violence is more intellectually specialized and less readable than Sex and War, and yet the portrait of violence that emerges feels truer to my experience. Collins’s method is to review countless hours of film and video footage, combined with ethnographic observation, of violent acts of every conceivable type. From playground shoving matches and street corner fistfights to riots and open warfare, he tries to understand what circumstances can enable fighting and killing.

“Visual evidence shows us something about violence that we are not prepared to see,” Collins writes. Through painstaking, frame-by-frame analysis, Collins reveals the typical violent act as sordid and incompetent, and he methodically refutes the idealized, heroic portrayals of violence that permeate movies, TV, and the boastful stories tough guys tell each other. Almost all real violence, he discovers, is characterized by fear, panic, avoidance, and brevity. Most conflict defuses before it becomes violent; most violent conflict stops short of killing. When actual killing does occur, it is usually carried out by the strong and numerous against the weakest and most isolated victim the attackers can find. There are brave, competent fighters as well as sociopaths in the world, but they are the exceptions, not the rule.

Indeed, one lesson I drew from his analysis is that there is little I could have done to help the target of the attack I witnessed on Halloween; any meaningful intervention would have had to have occurred before the violence turned into frenzy. And though encounters like that one might briefly sour my view of human nature, the truth is that they are very rare in my life. News media and pop culture focus obsessively on violent acts, but my experience mirrors the research: The vast majority of humans, even the males, will avoid violence at all costs. Peace, not war, characterizes the daily interactions of almost all people. Statistically speaking, this holds true even in the world’s most violent regions, and that is precisely why real violence is so shocking, even in wartime.

These facts lead Collins to a surprisingly sanguine conclusion: “The Hobbesian image of humans, judging from the most common evidence, is empirically wrong.” Collins’s topic is brutality, and yet he finds that brutality is actually quite rare. “Humans are hardwired for interactional entrainment and solidarity; and this is what makes violence so difficult,” he writes. Fear isn’t just an individual’s selfish need to avoid bodily harm; it is a barrier that stands between the emotion of anger and the act of violence. The interrelated forces of fear and empathy are what military and police services must train young people to overcome.

“Humans are hardwired for interactional entrainment and solidarity; and this is what makes violence so difficult.”

Many of Collins’s observations actually converge with those of Potts—they would agree, for example, on the team dynamic that drives most violence—and yet I think Potts’s worldview too often leads him to exaggerate gender differences as well as the frequency and easiness of violence among males. In contrast to Potts’s sweeping generalizations and evolutionary speculation, Collins is refreshingly empirical and concrete.

For that reason, perhaps, Sex and War offers more in the way of solutions.

Collins is focused on understanding “micro-interactions”; his modest, but helpful, suggestions at the end of the book are aimed at cooling one-on-one hostility. The world-historical canvass on which Potts and Hayden work leads them to propose a much more ambitious program for reducing the amount of violence and war in the world: empowering women with education, opportunities, and access to birth control; ensuring universal education in science and history; defending free media; and limiting the supply of arms in the world. Though their underlying analysis might be flawed—the United States is advanced on many of these fronts, yet that didn’t stop us from launching a war that has killed hundreds of thousands of Iraqis—it’s hard for me to argue with their recommendations. They are worthy in and of themselves, as is any effort to rid the world of violence.