GOP presidential candidate Donald Trump has bragged about laying his hands on women without their permission, and numerous women have come forward to claim that he assaulted them. In the past and throughout the campaign, he has used raw and disrespectful language to describe women, including his opponent, Democratic candidate Hillary Clinton. When confronted about this language in the second presidential debate, Trump trivialized it as “locker-room talk.”

My 12-year-old son overheard the “locker-room” statement as I watched the debate. “What are they talking about?” he asked. My heart sank and my mind went blank. I mumbled something, I don’t remember what. Then I rallied and said: “Donald Trump bragged about grabbing women without permission. He is not a good man.” To which my son said, “Yeah, he sucks.”

I have readily discussed Trump’s racial comments with my son, in part because he told me that he heard peers talking about them at school. Perhaps as a result, I get the distinct impression that my kids have come to think of Trump as a kind of American Voldemort. That’s fine with me. One survey of educators, published in April, found that Trump’s racial rhetoric triggered “fear” and “anxiety” in minority students. Worse, educators reported a rise in bullying against these students, sometimes using words heard in the campaign. I don’t want my boys to think that’s OK.

I don’t want them to think that about Trump’s sexual comments, either. And yet I’ve been extremely reluctant to discuss them with my son and stepson. Why? My middle-school boys are entering adolescence, so perhaps I’m experiencing fatherly jitters in confronting the fact that they are becoming sexual creatures. But the truth might be more complicated than that. Part of me fears that by drawing attention to Trump’s words I’ll be normalizing them. If I pretend Trump’s sexual attitudes don’t exist, then, an irrational part of me hopes, my boys will pretend with me.

I’m not alone. When I surveyed Facebook friends, almost all of them shared my ambivalence. Most assumed that their boys hadn’t heard the genital-grabbing comments. As one mother said, “My kids (both boys) are much more aware of Trump’s racist comments than sexist ones. Maybe they don’t hear us as parents talking about the p****-grabbing body-shaming as much as about the wall, deporting Muslims, etc.”

The trouble with this perspective: How is it that our boys could be so aware of Trump’s demeaning comments about, for example, Mexicans, but not about women?

Yes, it may have to do with the reluctance of children and parents to discuss sex with each other. If my own youth was any indication, most middle- and high-school boys would rather die than discuss sexual matters with their parents. Do you know what else I remember? A lot of very careless sexual talk with my friends, and all of us discovering pornography, often by the beds of our fathers. Who wants to discuss this stuff? It seems to me that we—both boys and parents—are participating in a conspiracy of silence, based mainly on embarrassment and shame.

Even if they’re not paying any attention to politics, most kids have smartphones by the time they finish middle school. That means they have access to whatever’s on the Internet, including pornography, and they likely encounter plenty of language that’s far worse than what the GOP candidate said. From this perspective, Trump is just a symptom. The challenge we face goes well beyond November 8, when Americans will pick either Trump or Clinton. The problem is cultural and psychological; we can’t defeat misogyny with one vote.

So what can parents and educators—especially men—do to stop the “Trump effect” on tween and teen boys, building a culture of sexual consent and open communication? It’s not enough, in my view, to simply say: Don’t do it, don’t denigrate women, don’t touch them without their permission. Our boys also need positive ideals to strive for—or at least some image of a man they are trying to become.

Here are some tips, submitted with a lot of humility, based on a combination of my personal experience and research.

1. Choose to speak with boys

Men should serve as an example to boys. This is a platitude, and a staple of articles like this one. And yet, in daily life, this advice can become remarkably tricky to put into practice.

The vast majority of fathers and male teachers will never commit sexual assault and would never, explicitly or implicitly, endorse the kind of behavior Trump does. Some think that’s enough. The trouble is that our children are surrounded by bad examples—and it is quite easy be silent in the face of words and actions like Trump’s. Many of us, I’m sure, just don’t know where to start when it comes time to speak up. We’re afraid of looking stupid.

My opinion? It’s more important to take an awkward stand (and risk teen ridicule) than to seem to take no stand at all. Our tweens and teens will learn about sexuality and violence. Our task is to prepare them for those lessons, as best we can. If the choice is between silence and a conversation, then I believe we need to pick conversation, every single time. That’s part of what it means to be an example, so that our boys will be more likely to speak up themselves, if confronted with words or behavior like Trump’s.

When my friend Chris—a health educator at a San Francisco public school—heard about the Access Hollywood video in which Trump bragged about grabbing women by the genitals, he didn’t wait: “I knew my 14-year-old son would probably see them skewering it the next night on Saturday Night Live.” So Chris texted him an article denouncing Trump’s comments, and added: “Remember that grabbing others—especially their breasts, butts or genitals—w/o consent is NEVER OK, and if you see someone doing that you should try to intervene.” Later, they talked about it in person, and then watched this clip from the Daily Show together.

This to me seems like a model response. Chris a) assumed his son would see it; b) immediately and unambiguously denounced the words and behavior; c) followed up the text with an in-person conversation; and d) engaged other media in the conversation, holding up positive examples alongside the negative one.

What if you hate Trump’s comments about women—but are voting for him anyway?

I think the first step is to admit that you face a real difficulty. It’s not that hard for me to imagine; I’ve voted for flawed candidates myself, because I supported their policies or felt that the other candidate was worse. It’s not my mission with this article to get anyone to change his vote. Here, I only ask this of us as men: Let’s not minimize the harm of words or behavior like Trump’s, when talking with our sons.

2. Speak with boys about pornography and consent

Trump’s comments about women are shocking because they seem pornographic. 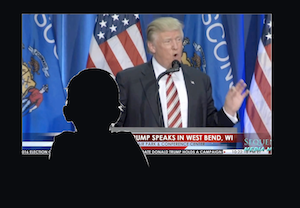 Sexual communication often follows a script that is shaped by culturally defined roles for men and women. Men pursue, women draw them in. Sexually successful men are studs, but women are sluts.

There are biological forces that reduce our resistance to this script. Male or female, almost all of us know what it’s like to be in the grip of lust; especially when we’re young, that powerful shot of testosterone and dopamine can override our judgment and our ethics. In the heat of the moment, it just feels right to mindlessly obey unconscious impulses and stereotypes.

That’s why our sons (and daughters) need to hear this message: Stop sleepwalking, and wake up.

Respecting women isn’t about suppressing sexual desires and impulses; it’s about non-judgmentally cultivating awareness of them. If we know what’s driving us, we can take control of ourselves and we can consciously set new intentions. If your subconscious drive is to just get laid and you’re not aware of that, you may find yourself doing things that are emotionally destructive, or even criminal. If, on the other hand, you set the intention to connect with another human being, to get to know them, to make them happy, to give them pleasure—then you increase the likelihood that those things will happen.

I think, for most tween and teen boys, this is the place to start—to talk about our own intentions when it comes to sexual relationships, and to ask them to explore their own.

I’m talking about mindfulness, of course, or the beginnings of it.

To some, mindfulness has become a cliché, and yet every day, people destroy their own lives through the lack of it. I look at a man like Donald Trump and I see a man who is not self-aware. He acts, he doesn’t reflect. He speaks, without thinking about the impact of his words. In the Access Hollywood audio, he’s filled with lust, but it’s mechanical, foolish, dull. That’s not an example I want my boys to follow. Instead I want to ask them to be curious, creative, and caring.

How do I do that? I’m not sure, to be honest. As I try to help them grow, I have my own work to do. All I can do right now is try.

4. Speak out for an alternative sexual paradigm

In my view, the debate about Trump’s sexual comments really pits two different paradigms against each other.

One paradigm insists men can say what they want to women and put their hands on women whenever the “uncontrollable urge” strikes; the way for women to protect themselves from men’s wild urges is by concealing their bodies. The boundary between “male” and “female” is rigidly demarcated and policed; everything depends on that, because otherwise how can you allocate the power? If the man denies doing “what every man does,” as Trump has, then of course he is believed, and his female accusers are denigrated as unattractive liars, or (if that doesn’t work) so sexy that the men just couldn’t control themselves. This attitude often goes hand-in-hand with the elevation of certain female body types, combined with disgust for women’s bodies generally.

But there is another way of talking about sexuality. In this alternate paradigm, people of both sexes and all genders are asked to take responsibility for themselves and their desires. Men are not slaves to primal urges; women need to say what they want. “Yes” means yes and “no” means no. People do what they want with their own bodies and they control what happens to them. In this paradigm, you don’t shift blame from the more-powerful to the less-powerful. You don’t assume men have more rights (and fewer responsibilities) than women. You don’t even necessarily divide humans into “men” and “women”; you accept that people play with masculine and feminine traits, and can be whatever they want to be.

That’s my vision of a positive, healthy sexuality, but there are no utopias here. Just people doing their best. When we sit down to talk with our boys about women and sexuality, that’s what we need to bring to the table: our best.