At a press conference in Australia earlier this month, the Dalai Lama called for more leaders with compassion. “In that respect, biologically, females have more potential,” he said. “Females have more sensitivity about others’ wellbeing.”

The Dalai Lama is famous for engaging in dialogue with scientists and provoking them to study the impact of meditation on the brain. But does science support his argument that women are intrinsically more compassionate than men? 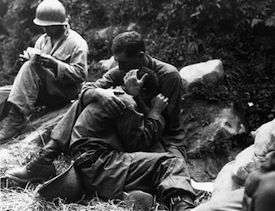 Psychologists generally tend to cringe at such strong black-and-white statements since we know that data usually do not support such claims.

If you ask a neuroscientist to distinguish a male from a female brain, for example, s/he would have a difficult time doing so. Although differences have been detected (for example, women appear to make greater use of both hemispheres of the brain and therefore have a slightly thicker corpus callosum—the part of the brain that bridges the two hemispheres), the differences are subtle and there is no single area of the brain that we can say clearly distinguishes a male brain from a female brain.

Moreover, whether they are researching animals or humans, males or females, scientists find that compassion is innate and instinctual across the board. Research with both animals and humans shows that we naturally have an impulse to help others who are suffering. This tendency—which Greater Good Science Center founding director Dacher Keltner has called the “compassionate instinct”—seems to have ensured our survival. Research by Stanford University’s Robert Sapolsky suggests that this instinct is linked to thriving and improved reproduction in primates.

In short, compassion is natural and no gender differences have emerged across these studies. But that doesn’t mean that men and women experience or express compassion in the same way—and that’s where the science gets interesting. We might just be prone to seeing compassion through a feminine lens, and so miss the ways in which men try to alleviate suffering.

In self-report questionnaires, women do, in general, report experiencing more compassion in their lives than men report doing.

This self-reported difference in compassion expression is probably due to different socialization processes. We know that our brain is “plastic” and that it changes in response to experience. A large body of research has shown that men and women have very different experiences and that they are socialized extremely differently as of infancy. Think about girls who are handed dolls and baby carriages to play with (suggesting nurturing and caring behaviors) and boys who are handed superheroes and toy soldiers (suggesting fighting, and protecting behaviors). When girls (or women) cry it is seen as normal but if boys (or men) do, they are often taught crying is a sign of weakness and is not “manly.” How many differences observed in adulthood are due to years of socialization?

Socialization may in turn have impacted how men and women learned to communicate emotions such as kindness and compassion. In a study of human touch by Dacher Keltner, participants were asked to communicate different emotions by touching another participant’s hand. They were also asked to guess what emotion was being communicated when their partner touched their hand. The participants could not see each but guessed each other’s emotion simply through a touch of the hand. When both partners were men, the odds of them guessing that the emotion being communicated was sympathy was no greater than chance. When at least one of the participants was a woman, however, participants were more accurate. Since sympathy is seen as a more “feminine” trait more acceptable for women to express, women may have learned to both communicate and recognize it more easily.

Another reason women may have learned to express compassion more easily emerges from the work of Shelley Taylor, at UCLA, who found that men and women respond differently to stress. These differences may have certainly have trained women to express compassion more explicitly. Taylor found that the “fight or flight” response is characteristic of men whereas women lean toward “tend and befriend.” Women faced with a stressful situation are more likely to respond by socializing, bonding with others, and seeking protection and nurturance within a community.

These tendencies may have been evolutionarily adaptive since we have evolved in communities where women’s primary responsibility was raising and protecting offspring who needed protection while men traditionally engaged in hunting and warfare. However, a new study by Markus Heinrichs and Bernadette von Dawans suggests that men, too, also can respond to stress through social bonding.

Research does find neurobiological differences in the experience of compassion. Women may at times have higher levels of oxytocin—sometimes called the “cuddle hormone” or “love hormone” because it is linked to bonding, social connection, and monogamy. Oxytocin is produced during sex for both men and women but is particularly important during childbirth. It is produced in women during labor and lactation in women and is believed to trigger bonding and nurturing behaviors.

However, the regions of the brain activated in men were different than those in women. While this study does not suggest that one gender experiences compassion more than the other, it does suggest that the genders may differ in how compassion is experienced and expressed.

The many forms of compassion

However, expressions of deep compassion are not always nurturing or maternal. Think of the many heroic acts that happen daily in which people throw themselves into dangerous situations to help others. These are fierce, courageous, and even aggressive forms of compassion.

Rather than suggesting that women are more compassionate than men, I would argue that they can differ in their expression of compassion. While women’s expression has culturally evolved to be expressed through nurturing and bonding behaviors, men’s compassion has traditionally evolved to involve a protective behaviors that helped ensure survival. Compassion may have taken on a different “look and feel” depending on our evolutionary needs for survival. While women tend to express “nurturing” compassion, men tend to express “fierce” compassion.

Generalizations are generally never accurate. We all engage in both nurturing and fierce expressions of compassion. Think of a mother who yells and roughly pulls her child away from oncoming traffic (fierce compassion) or male military service-members who hold each other in grief after the loss of a friend (nurturing compassion). Love, compassion, kindness are natural to all of us, men and women, in their varied forms of expression.

Rather than asking whether men or women are kinder or compassionate, the question should rather be: What are the myriad beautiful forms in which compassion expresses itself?

A different version of this essay originally appeared in Emma’s Seppala’s Psychology Today blog, “Feeling It.”