Chicago is moving ahead with plans to close 50 schools in the city’s school district, the third largest in the nation; similar closings are currently on the table in other major U.S. cities, including Philadelphia and Washington, D.C.

These plans have been met with angry protests from teachers and parents who argue that the closures will force students to cross dangerous gang lines on their way to school. In Chicago at least, officials have promised to give these children “safe passage” to and from school, and to provide counselors to help them adjust.

It won’t be enough. If the closings go as planned, the districts’ work will have only just begun. But if the cities heed lessons from sociology and social psychology, they may be able to keep a difficult situation from getting even worse—and, in the process, improve relationships between kids from clashing neighborhoods. 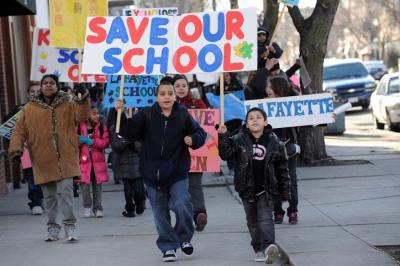 Students in Chicago protest the closing of their elementary school--one of 50 slated for closure by the city. © Bill Healy, Chicago Public Media

Research that one of us (Trinh Tran) has conducted suggests that the threats to displaced students may even go beyond stray bullets on the way to school; they’re also at risk to have their class sizes balloon and their teachers leave their jobs at a higher rate.

What’s more, when kids from different neighborhoods are merged into the same school, they face greater risks of conflict within school. That’s in part because the school becomes a battleground for warring neighborhood identities.

These are all findings from Trinh’s fieldwork in the south side of Philadelphia, an area demographically similar to the neighborhoods affected by Chicago’s and D.C.’s school closings. There she studied the experiences of students from low socio-economic neighborhoods who attend either their neighborhood school or a magnet school in another part of town. Even within neighborhood schools, kids told her that they don’t feel safe. For decades, some of the streets where they live have been warring with another street a few blocks over—and these turf battles continue in the school hallways.

“It’s about the block you live on,” one student told her. “I live near 27th Street and apparently that’s one of the most hated streets. … After a while, I just stop telling people where I live [or] I’m gonna find myself hurt somewhere.”

That’s the situation even at neighborhood schools; at magnet schools, which pull from many more neighborhoods, the potential for conflict is much worse.

Yet Trinh has also found that conflict in the magnet schools is often less than in neighborhood schools. How is that possible?

The answer lies in the way these magnet schools have managed to foster a new collective identity that trumps students’ neighborhood identities. Creating this identity requires members of conflicting neighborhoods to come together—sometimes a tall order, given the groups’ histories. But Trinh found that magnet school students identified more with their school than their neighborhood, in part because of the strong school spirit and cross-neighborhood friendships encouraged by the magnet schools.

Indeed, these findings show how when bringing together students from conflicting groups, districts can not only help these students adjust to their new schools but help promote peace between opposing neighborhoods.

Of course, magnet students choose to be at their school; kids impacted by the closures might resent that they’re forced to change schools or to open their doors to rival neighborhoods.

But time and again, social psychology research has found that personal contact between members of different groups can actually help those groups overcome prejudice and conflict, even when group members are less motivated to intermingle—as along as certain important conditions are in place. So what are those conditions?

First and foremost, the interactions need to be friendly and endorsed by authority figures. In schools welcoming new students, this could mean that principals take the lead in creating a “buddy” or mentor program, where existing students take a new one under their wing, under the supervision of a teacher, counselor, or other adult at the school. Without this initial “friendly” interaction, group cohesion will be difficult to create.

Another important condition is that both parties feel like they’re of equal status. This means that returning students shouldn’t get first choice of cubbies, lockers, classes, or extracurriculars; instead, schools should convey that newcomers are just as much a part of the school community as anyone. They could even involve students in choosing a new mascot and school colors, soliciting equal input from old and new students alike.

Finally, to promote peace between groups, group members need to have common goals and a sense of interdependence that gives them incentive to cooperate. For instance, early in the school year, principals might create an academic or athletic competition within the school, grouping the students into teams that intentionally cut across neighborhood boundaries.

None of this will be easy; weathering these transitions will require hard work and commitment from all involved. But, in the end, these efforts may yield a benefit that everyone can get behind: safer neighborhoods and schools.