Civic engagement is good for us and for society. People who vote, volunteer, or participate in community building tend to have better health and greater well-being, while feeling more prepared for professional careers. A society with an engaged citizenry is also likely to be a happier, healthier society. 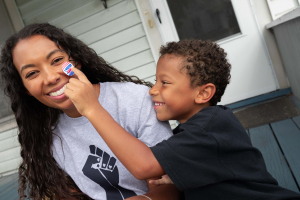 But not all Americans participate in social and political activities equally. For example, in the last presidential election, only 57% of adults ages 18 to 34 voted, while 74% of adults over 65 voted. And, while 63% of Black and 54% of Latino Americans voted in 2020—an uptick from 2016—that’s still lower than the 71% of whites who voted.

Civic participation isn’t just about voting, of course. Indeed, it may look very different for young adults—especially from Black and Latino communities. Those who’ve historically been marginalized and denied access to power may feel like the current system has failed them and be less inclined to vote. They may be more interested in challenging the status quo and participating in civic life in other, less traditional ways. We need only look to the Black Lives Matter movement to see how civic action outside of voting can be effective in prompting societal reckoning and change.

How can we encourage young Black and Latino adults to get involved in civic action (in traditional or non-traditional ways) that benefits them and society? A study by Josefina Bañales of the University of Pittsburg and her colleagues aimed to find out.

They analyzed surveys of 500 Black and Latino young adults (ages 18 to 34) living in swing states prior to the 2016 election, to see what prompted their civic engagement. In particular, they wanted to investigate the impact of having a strong “critical consciousness”—meaning, an awareness of structural inequality in society, a sense of personal agency, and a willingness to challenge the status quo.

To measure critical consciousness, participants had reported how much they agreed with statements like, “Racial discrimination against people of color remains a fundamental aspect of the American society” and “The richest 1% of Americans have far too much political power.” They’d also noted how likely they were to vote in the upcoming election, how much they participated in political activities (such as political campaigns, boycotts, or donating to political causes), and how they used social media for political purposes (commenting on news articles, seeking perspectives from people they disagreed with, or sharing political content with others).

When Bañales analyzed the data, she found that Black and Latino young adults who were more aware of systemic inequality were also more engaged politically, in both mainstream and non-mainstream ways. For example, they were more likely to sign up for campaigns, participate in social media discussions, and plan to vote in the 2016 election.

“The more they were critical of the American social system—meaning, they recognized that people of color were being disadvantaged by the system—the more both groups were likely to engage in sociopolitical actions,” says Bañales.

In some ways, this is a surprising finding, she says, as you might think that people critical of political institutions (thinking they are racist, biased, or less accessible to some groups) might just disengage and give up. Instead, it made them more determined to get involved.

This is important to know, especially given recent discussions around teaching critical race theory—the theory that racism is embedded in American society, supported by government polices (like redlining), and still impacting the advancement of communities of color today. While some might argue that critical race theory is unnecessarily divisive, her research suggests it may be helpful and important for changing the status quo, improving the well-being of people of color.

Still, while critical consciousness seemed relevant to political activism for both Latino and Black adults, Bañales found important differences between the two groups. For example, Latino young adults who planned to vote in the 2016 presidential election were also more politically engaged in other ways. But, for Black adults, planning to vote was not related to other forms of political engagement, suggesting they may have a different path to civic action than Latino adults.

One potential path may involve social media, says Bañales. As Black Americans are among the highest consumers of social media in the United States, it may be that participating in social media better addresses their political needs, she says, by highlighting issues important to them or providing a simpler way to get involved. Not recognizing the important role that social media plays in civic engagement for Black Americans could mean missing out on important opportunities.

“You can’t necessarily have a one-size-fits-all approach when it comes to thinking about civic engagement for marginalized communities,” she says. “There are still within-group differences, variation, and diversity in how they choose to show up. And politicians, teachers, youth workers, and anyone invested in the civic and political development of young adults have to be very mindful of that.”

We could all use more critical consciousness

This research adds to results from past studies showing the positive impact of critical consciousness on voting and civic participation in youth of color, including Bañales’s own work with high school students. When young people think critically about the structural and historical reasons why racial inequity exists, they are more apt to take action to correct it, she says.

Even white students seem to benefit from understanding the roots of racism according to Bañales’s research. If they are aware of the historical contexts, they are less likely to embrace a “colorblind” approach to racism that promotes treating people as “individuals” without regard to race or ethnicity—an approach that ignores experiences of discrimination and actually increases prejudice.

Overall, Bañales’s research supports the argument that encouraging young people to question systemic racism and understand the role it has played in society is beneficial to civic engagement. If we could teach these lessons from a young age, we may be able to grow the civic leaders of tomorrow and fight racism at the same time.

“The more we lean into these difficult conversations about race, and the more that people have an accurate understanding of the reality of racial and class inequality in our society, the more positive engagement in the political system,” says Bañales. “We should be having these conversations with young people, the earlier the better.”