The election of Donald Trump mobilized many Americans. Whether it’s protesting his immigration policies on the left, or rallying around protecting Confederate monuments on the right, Americans seem to be stepping up to make sure their voices are heard by their political representatives. 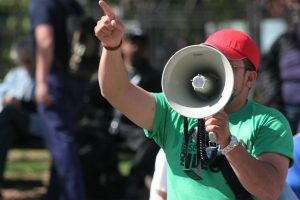 This is probably a good thing. The more people engage with their government through protests, volunteerism, and voting, the more representative our democracy will be. But, while increased activism is encouraging, there are still many Americans who remain disengaged, perhaps thinking politics is just not that relevant to their everyday lives or that the system is too corrupt to get involved in fixing.

What can we do to help motivate people toward more engagement? According to a new study, it may involve turning down our impulse to soothe our negative emotions.

In several experiments, University of Toronto researcher Brett Ford and her colleagues studied how people who voted for Hillary Clinton in 2016 used the emotion-management tool “reappraisal” to calm their anger, sadness, fear, or disgust—and whether that affected their political action.

They measured reappraisal (which involves reframing problems in a more positive light) by asking participants how much they agreed with statements like, “To manage my feelings about the election, I reinterpreted the meaning of the situation in more neutral, less negative terms.” Then, they measured political action by looking at people’s intentions to engage or their actual engagement in different forms of activism—like donating to political causes, volunteering for campaigns, participating in marches, or posting political content on social media. Their results showed that people who used reappraisal to feel better tended to have less intention to get involved politically and to be less engaged in actual political causes later on.

However, since it was hard to prove a cause-and-effect relationship, they conducted another experiment, in which they randomly assigned some participants to pay extra attention to their emotions (a control group) and others to receive instructions on how to use reappraisal to counter negative emotions. Then, after participants watched an anger-inducing video of Donald Trump, the researchers measured their intention to engage in various forms of political action. The results showed that, in comparison to the control group, people who were successful at using reappraisal were less likely to want to engage politically.

To Ford, this result was unsurprising.

“We know from research on political psychology that one of the quite robust predictors of political action is negative emotions,” she says. “So, logically, if people are able to successfully change their feelings using emotion regulation strategies like reappraisal, it’s plausible this would translate into less action.”

This doesn’t mean that she thinks reappraisal is bad, though. As a researcher who studies psychological well-being, she understands why people would want to decrease their negative emotions. But she wants people to understand that emotional soothing may come with a cost.

“People naturally will attempt to protect their emotional well-being, but there might be important trade-offs,” she argues. “Reducing negative emotion seems to have implications for action and engagement in politics.”

Does that mean we should try to fuel our anger rather than lessen it? Ford isn’t so sure. She argues that anger comes in many forms—frustration, irritability, outrage—and that these may lead people to behave well or badly, depending on their personal resources and skills.

Plus, she adds, there could be ways to both soothe our difficult emotions and remain active at the same time. Though Ford is not aware of research supporting a particular method for achieving this, she hypothesizes that acceptance-based approaches to dealing with emotions—like mindfulness meditation—might work. And, given prior research that suggests mindfulness leads to greater emotional regulation and kind and helpful behavior, perhaps it holds some promise for achieving both ends.

“Mindfulness is something we’re very interested in,” says Ford.

Ford also wants to make sure that reappraisal doesn’t get a bad rap. She sees benefits in certain conflict settings—like when your goal is to better appreciate or understand the viewpoint of others. She points to the work of Eran Halpern, who found that using reappraisal techniques with Israelis helped them to be less politically rigid and to become more willing to provide humanitarian aid to Palestinians affected by the Palestinian/Israeli conflicts.

“So, whether or not to use reappraisal kind of depends on what the nature of the conflict is, and what actions would be best for that conflict,” she says.

It’s also possible that anger is not the only emotional fuel for political action, she says. Halpern’s research also provided some evidence that hope and empathy could be relevant motivators in conflicts. “Hope might be a pathway to action, because maybe you’re more likely to act when you think change is possible,” she says.

And reappraisal—or other ways of soothing anger—could have benefits for activism down the road that her study didn’t assess, she says. For example, though anger may motivate us in the short term, sustained political involvement could require more emotional management to prevent burnout.

“It’s useful to think about political activism as a marathon and not a sprint,” she says. “The strategies that are going to be useful for sprinting may not be the same ones that are useful for a marathon.”

Where does that leave us? Since reducing our anger may lead to us to be less engaged politically, at least in the short term, those of us who want to remain politically active should pay closer attention to this potential side effect of tamping down anger and take steps to address it. Perhaps listening to and accepting our emotions more fully, rather than trying to stop them, could help guide us.

“The extent to which people choose to feel emotions when they’re useful—even unpleasant emotions—could have important implications for all of us.”