Many of us know the pleasures of feeling awe. Whether hiking majestic peaks, admiring great art, or watching the birth of a child, experiences like these fill us with a sense of wonder, challenging our understanding of the world and our place in it. 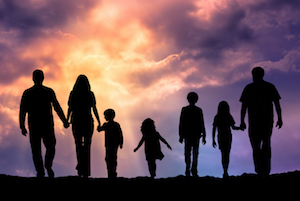 But, while many of us know it when we feel it, science has not understood awe as an emotion very well. Though research suggests awe increases our well-being and leads us to be more altruistic and generous, it’s still not clear why that would be.

Now a new study sheds some light on awe’s unique function. Through a series of experiments, an international team of researchers were able to show that experiences of awe diminish our sense of self-importance, creating a “small self” perspective that seems to aid us in forming social groups.

Yang Bai—a researcher at the University of California, Berkeley, and one of the paper’s authors—believes her research lends insight into awe’s evolutionary purpose. Awe helps you to stop focusing so much on yourself and to look more to what’s around you—toward other people and the world at large, she says. And, by doing that, people will naturally seek more social engagement.

The participants also gauged how strongly they felt various positive and negative emotions—like hope, gratitude, envy, or embarrassment—and filled out a quick measure of “self-size” in which they were asked to choose a circle that most represented their sense of self from a series of progressively larger circles. (This measure of self-size and others had been validated previously and were not connected to one’s actual body size.)

Analyzing the contents of the diaries, the researchers found that both groups reported a smaller self-size after experiences of awe than of joy, and that the self-size was related to the degree of awe they felt. In addition, they found that other positive or negative feelings did not affect self-size ratings.

This result did not surprise Yang Bai. “When I experience awe, I feel like I’m just a small piece of this great world,” she says. “It’s a kind of a metaphorical sense of the self that is shrinking during awe.”

Interestingly, though, the reported elicitors of awe were different for Chinese participants, who chose more experiences involving other people rather than ones involving nature. In addition, Chinese participants had greater effects from awe—meaning, that their self-size measures were significantly smaller than Americans’ self-size experiencing similar levels of awe.

“People may have a different understanding of awe, but the small self is the key component of the experience,” she says. “But, because different cultures provide different contexts, there are some differences.”

As the self shrinks, our world expands

To further the understanding of awe and the small self, Bai and her colleagues asked random people in two tourist locations—a tourist trap called Fisherman’s Wharf in San Francisco and a scenic lookout of Yosemite Valley—to fill out a short survey measuring how much awe, joy, pride, sadness, fear, or fatigue they felt. Then, they asked the people to draw a picture of their current selves in that moment, labeling themselves with the word “me” and adding anything else they wanted to add to the drawing.

Results showed that people in Yosemite experienced more awe than those in Fisherman’s Wharf, regardless of nationality. In addition, people who completed the portraits in Yosemite drew significantly smaller pictures of themselves and smaller “me” labels than those at Fisherman’s Wharf. This smaller self was firmly connected to a feeling of awe, even when controlling for all of the other emotions they measured.

“While we’re feeling small in an awe moment, we are feeling connected to more people or feeling closer to others. That’s awe’s purpose, or at least one of its purposes. ”

Still, it was unclear if awe caused a smaller sense of self.

So, Bai and colleagues conducted a lab experiment, in which Chinese and American participants were randomly assigned to watch either an awe-inspiring video of nature or a humorous video, with animals in natural settings being dubbed with silly human voices.  Before and after the video, the participants filled out a questionnaire measuring self-size, positive and negative emotions, and perceived social status.

Results showed that the awe videos consistently elicited a smaller sense of self, but that small-self did not equate to feeling lower in social status. This, Bai believes, may help people—especially Americans, perhaps—better accept the idea that a small-self can be positive.

“People in the U.S. are often taught that they need to be independent and to rely on themselves; so, they may prefer to think of their self-size as larger—more dominant and confident,” she says. “But, the small-self brought on by awe doesn’t decrease social status. It’s something unique to awe.”

What does all of this have to do with social collectives? Additional experiments by Bai and her colleagues delved into this.

Awe keeps us together

Chinese and American participants were again randomly assigned to watch an awe-inducing video or a humorous video and then instructed to draw a picture of their current social circle, using circles to represent people (including themselves) and distances between circles to represent how close they felt to each member of the social network. They also filled out a questionnaire about their emotions.

Results showed that participants feeling awe drew smaller circle sizes for the self, as one might expect given other experiments. However, feelings of awe did not decrease the average size of the other circles drawn, so that the “small-self” effect didn’t make everything look smaller.

In addition, for awe-filled American participants, the number of circles representing their social ties increased; for Chinese participants, the average distance between “other” and “me” circles decreased, but the number of social ties didn’t change significantly. Bai suggests this may have to do with cultural differences—Americans being more individualistic, and Chinese being more collectivist. But, regardless, she concludes, the small-self experienced in awe is tied to better social relationships.

“While we’re feeling small in an awe moment, we are feeling connected to more people or feeling closer to others,” she says. “That’s awe’s purpose, or at least one of its purposes.”

In the final experiment, Bai and her colleagues looked at awe and social cohesion, while also comparing the effects of awe versus shame—an emotion also linked to “small-self,” though not in the same way.

Participants filled out a survey which included a measure of their self-size. Then, they were prompted to recall an experience of awe, shame, or a neutral control (specifically, when they last did laundry) and to write about it. Afterwards, they again rated their self-size, and filled out measures of self-focus, engagement with others, self-esteem, social status, and sense of power.

Those who wrote about awe or shame both experienced a decreased self-size, as expected. But, the participants in the awe condition did not experience lower self-esteem, social status, or power. Instead, they experienced greater collective engagement than those who experienced shame.

“We can feel small in response to different kinds of emotions—for example, when you feel embarrassed, you will also feel small. However, the smallness brought on by awe is unique,” says Bai.

She hopes that by spreading the idea of awe and the small self, she will help people to understand why they need more awe in their lives.

“People can easily ignore the benefits of feeling small, of feeling humble,” she says. “But, we all feel the need to feel connection to other human beings, and awe plays a very important role in that.”