In a 2006 article for the Los Angeles Times, Sam Harris identified 10 myths about atheism, among them the idea that “atheists are closed to spiritual experience.”

Harris explained: “There is nothing that prevents an atheist from experiencing love, ecstasy, rapture and awe; atheists can value these experiences and seek them regularly.” 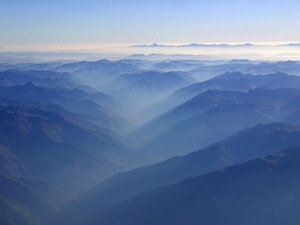 And in a post last week, my fellow 13.7 commentator Barbara J. King also wrote about atheism and awe. “Atheists feel awe, too. Everyone does. That wondrous sense needn’t be described by invoking the sacred.”

Yet the idea that atheism and awe are at odds is a common one. In a 2013 interview, for example, Oprah Winfrey refused to accept a woman’s self-ascribed atheism after the woman shared powerful experiences of awe and a love of humanity. Winfrey controversially responded: “Well, I don’t call you an atheist then. I think if you believe in the awe and the wonder and the mystery, then that is what God is.”

Of course, “the awe and the wonder and the mystery” could just as well describe what motivates many scientists, whether or not they believe in God.

So why the persistent idea that awe is inextricably linked to theism? And are “scientific awe” and “religious awe” fundamentally different, or deep down one and the same?

To be sure, awe is a multifaceted emotion, and one that’s only recently become the target of systematic psychological research. In an influential 2003 paper, psychologists Dacher Keltner and Jonathan Haidt argued that awe is characterized by two central features: vastness and accommodation. Vastness describes the experience of something larger than the self, whether that vastness is a matter of physical size or of metaphorical size, such as great power. Accommodation refers to the need to modify one’s current mental structures to make sense of the experience—whether or not such modification is actually enacted or succeeds.

These features of awe can help us understand how science and religion both elicit awe, and also how either theism or atheism could ensue.

When it comes to vastness, the natural world provides no shortage of material. In fact, studies have typically used nature documentaries, a full-sized replica of a T. rex skeleton, and even commercials depicting waterfalls, whales and astronauts in space as elicitors of awe. In one study, more than 70 percent of card-carrying atheists reported feelings of awe (“as if you were part of something greater than yourself”), with nature (54 percent) and science (29 percent) identified as the most frequent triggers.

On the other hand, religious spaces and rituals are often designed to encourage the sense that there’s something larger than the self, and an omnipotent God is—by definition—vastly powerful. So in their own ways, both the natural world and human representations of the supernatural can create a sense of vastness.

When it comes to accommodation, empirical research is sparse but the parallels between science and religion continue to be compelling. Scientific discovery is often fueled by the recognition that something isn’t adequately understood, with a subsequent desire to resolve the mystery. Similarly, awe experiences within religious contexts can involve confrontation with the mysterious and unknown, though the intended consequence might be acknowledging rather than eliminating one’s ignorance.

What we do know is that inducing experiences of awe can influence reported belief in God, potentially as a result of the need for accommodation that such experiences produce. One set of studies induced feelings of awe with videos of the natural world, and found that people subsequently reported greater supernatural belief. This was in part because awe made people less tolerant of uncertainty, and uncertainty is known to increase people’s confidence in agency and order.

But the picture is more complex. Endorsing a powerful and benevolent God may be one way to cope with uncertainty, but it isn’t unique. We know from related lines of work that science itself, especially scientific theories that offer clear structure and predictability, can also deliver many of the psychological benefits associated with belief in God, including a compensatory response to uncertainty. This suggests that experiences of awe could boost people’s confidence in science. In particular, awe could boost confidence in natural laws and orderly scientific theories—a prediction that, to my knowledge, has yet to be tested.

Keltner and Haidt suggest that awe can come in many flavors. While scientific and religious awe share core elements of vastness and accommodation, they likely differ in detail.

We need more research to better understand the causes and consequences of these different types of awe, as well as the dimensions of awe experiences and interpretations along which people vary. But the findings to date already tell us that the natural world is a powerful elicitor of awe, and that awe is consistent with a naturalistic worldview.

Atheists aren’t closed to awe or wonder or mystery. There’s one myth about atheism we can firmly put to rest.