Camping in New Mexico, far from cities and their light pollution, Craig Anderson would look up and feel small under the countless clear, bright, mysterious stars. Back home, he’d watch Star Trek and imagine “going where no one has gone before,” wondering what life might be like in all those points of light in the sky. 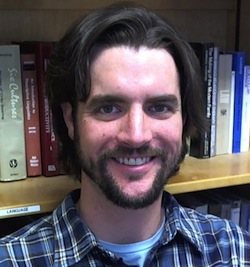 Today, he’s a Ph.D. candidate at the University of California, Berkeley. For the past six years, he’s worked with Dacher Keltner, faculty director of the Greater Good Science Center, in trying to understand the emotion those stars provoked. They’ve combined an online platform called Project Awe, which gathers stories and records of awe-inspiring experiences, with studies in the lab and out in nature.

Their in-the-wild experiments have brought groups of Bay Area high schoolers and veterans of Iraq and Afghanistan—now all students at UC Berkeley—on white-water rafting trips along the South Fork of the American River. Their goal: to understand how the experience might affect their well-being—and perhaps even alleviate symptoms of post-traumatic stress disorder (PTSD).

Linda Saunders is one of the veterans. She is a Marine who served in Iraq in 2009-2010, and then in Afghanistan three years later. In between tours, she became the mother of twins, who are now five years old. She went straight from Afghanistan to UC Berkeley in 2014 to start studying environmental science.

Anderson and Saunders will both be talking about the rafting trip at the upcoming GGSC conference, “The Art and Science of Awe,” on June 4 in Berkeley, California. I sat down with them both to explore their work and experience.

Craig Anderson: Awe happens when you encounter something so vast that you don’t feel like you wrap your mind around it completely, right at that moment. So, awe could involve experiences of profound beauty, or feeling super-connected to other people or to nature or to humanity as a whole.

JAS: Why do we feel awe? Why not just joy or excitement?

CA: In Dacher’s lab, we take what we call an evolutionary functional approach to emotion, grounded in the work that Charles Darwin did. This idea suggests that all the emotions that we see—sadness and anger and happiness—evolved as a feature of our species, not just cultural learning. Over the evolutionary history of our species, these emotions have helped us to adapt and respond adaptively to different kinds of situations.

Awe is a response to things that are perceptually vast, that we don’t fully understand at the moment. This makes it a very unique emotion. We find behaviors associated with awe that are adaptive in situations that are super novel, like trying to connect with other people or just being curious. When faced with something that blows your mind, you want to find out more information.


JAS: What specific things were you measuring in the rafting study?

CA: Before the trip started we had people rate their well-being, generally construed; how well they are getting along with people; how well they are sleeping; their own sense of happiness; those type of things. We followed up with participants one week after the trip via email and had them complete those measures again to capture change that had happened before the rafting trip to a week later.

In any emotion study, we like to get converging evidence. The first step is to gather subjective experiences. We also ask people: “Hey, how much awe did you feel? How much joy? How much amusement and pride?”

JAS: In my experience, when people try to verbalize awe, they often lapse into inarticulateness. Is that a problem when you’re investigating awe?

CA: Yeah. Awe experiences can be big, right? You know, if we just ask people “Hey, tell us about a time you experienced this intense awe,” we get a lot of stories about, you know, the birth of a child. How do you really capture bringing a new life into the world? Awe can be a very strong experience, so it’s a lot harder to describe awe than to describe getting a cup of coffee or whatever.

JAS: So you needed other ways to measure awe.

We also took physiological measures. We collected saliva, which we used for genotyping—but also hormones, both before and after the rafting trip. 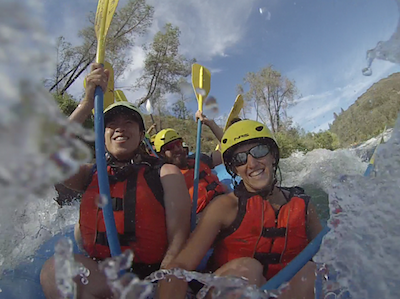 © A GoPro shot of Linda Saunders (right) and members of the Cal Vets Group. The trip was was sponsored by the Sierra Club’s Military Outdoors program.

Finally, we had a GoPro Suction Cup attached to each of the rafts looking back at the participants. We are currently behavior-coding that for things like teamwork, and also emotion expression. Emotion has distinct expressive components, so facial expression that people make and the vocalizations they make with their voice indicate their inner state. We are coding the video for prototypical expressions of awe.

JAS: Linda, tell me about your experience rafting down the river.

Linda Saunders: It was awesome. It was tons of fun. I definitely feel that every time I am outdoors, with the sun shining down, with good company, doing something physical, being out in the cooling water. You know, rafting isn’t something that everybody gets to do, so that activity alone is awesome. It’s those moments where all my senses are in play,  I would definitely say it’s awe. I love it and I’m still amazed at how much I love it, which is why I am going again this summer.

JAS: Did you know that you were being studied?

JAS: Craig, what are your most significant findings to date?

CA: Well, we have over 100 hours of this behavioral footage that we’ve been coding all academic year. We are not quite finished yet. So far, we are finding that the emotions people report are mapping onto the hormones that we measured, which is definitely cool.

We are finding that across the board participants report that they’re getting along better with their family and friends, they are feeling more connected to their community— all those things we would call social well-being.

We are also seeing a decrease in self-reported PTSD symptoms, which we measure in both adolescents we’ve studied and in the military veterans. The adolescents we take out on these rafting trips are from underserved communities in the Bay Area. Many of them actually exhibit PTSD symptoms as well. For both groups, we see a decrease in self-reported PTSD and also stress levels, and people are saying that they are sleeping better as well.

I should mention that this wasn’t an experiment in the technical sense. There wasn’t a control group, there wasn’t random assignment, but we are scaling this research up. That’s where we want to get eventually, and when we have those experiments we can start to make claims about causality. In the meantime, these findings are very encouraging.

Linda, I’m curious. If you hear me talk about PTSD symptoms and stress levels getting better, do you buy that? Or is rafting just a fun thing you do and that’s kind of it? Do our findings so far fit in with your experience or that of your fellow veterans?

LS: Yeah. So, good question. I won’t talk too much about myself but I have been learning about PTSD a lot. There is a wide range of PTSD symptoms and causes, so it’s really such a broad term. On the rafting trip, everyone was happy at the end and glad to take a break and talk about it and share the fun time we just had. I don’t necessarily see the long-term effects, other than maybe the encouragement to go again, just to feel that positive temporary time. I think if anything, it is a good distraction even from any of the milder symptoms.

JAS: Craig, why do you think awe evolved as an emotion? What could be its adaptive purpose?

CA: Well, Dacher is taken by this idea that awe helps people fold into a social collective. The idea is that the primordial form of awe involve feeling awe for a powerful leader that then helped people fold into a collective and work together better as a group. Now, I think that’s true and we have people from the lab, like Paul Piff, that published papers on how awe promotes prosocial behavior.

But the angle that I’ve taken with my studies—we are still working on trying to get this published—is that awe promotes curiosity. When we are faced with things that blow our minds, things we don’t fully understand, we want to learn more. And you can imagine, in the evolutionary scope of things, that people would feel awe as they look out over a valley or something, and that feeling might make them more likely to explore and gain, for example, more food resources.

I should note that curiosity also explains the prosocial findings. It turns out that people who are more curious get along better with other people. So its not that these accounts are mutually exclusive. But I really think it’s about the curiosity.

JAS: I definitely felt awe the first time I saw a big city, when I was a kid—that might have even been the first time I felt awe. I was like, “Wow, look at these huge buildings and all the people.” I was intensely curious about cities, and I still am. Now that I’m old, I’ve often experienced awe through my own kids.

LS: Right. I think you see things again that you didn’t really remember were there.

JAS: Yeah, that’s right. But my kids are 11 and 12 now, so they are starting to get unhappy about everything and complain about too much hiking, in cities or nature.