For many of us, the world seems pretty dark and hopeless right now. We are glued to our screens, hoping for good news, but more often than not we end up reading reports that fill us with anger, fear, or a sense of helplessness.

Still, countless acts of goodness, kindness, and heroism are taking place all over as the world battles COVID-19. Of course, much of it is going on behind the closed doors of hospitals and homes, anonymous and unsung. But some of it is happening for all of the world to see. We’ve rounded up some of the good news as a reminder that, amid the darkness, people are still out there loving and caring for each other.

People are self-organizing to help those in need

Grassroots groups are springing up where people can offer and ask for help from their neighbors. This list includes groups by state in the U.S., as well as several in Canada, Britain, and Germany. In my own community in Toronto, we’re calling it “care-mongering” and people are giving away food, offering to foster animals, and picking up medication for others. Meanwhile, in the U.K., a woman designed a postcard that you can drop off with neighbors who are self-isolating, offering your help with shopping or a friendly phone call. 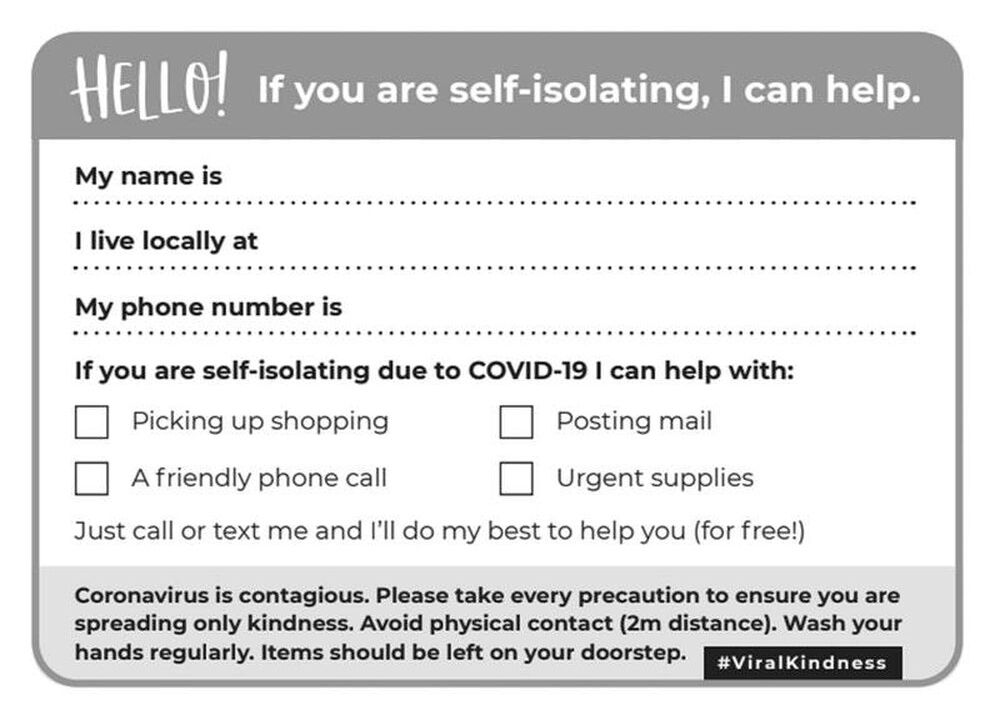 In countries across the world, including Iceland, Australia, the U.S., and Canada, grocery stores and pharmacies are designating certain opening hours specifically for at-risk shoppers. That way, people like the elderly and immune-compromised are less likely to face massive crowds and long lines. 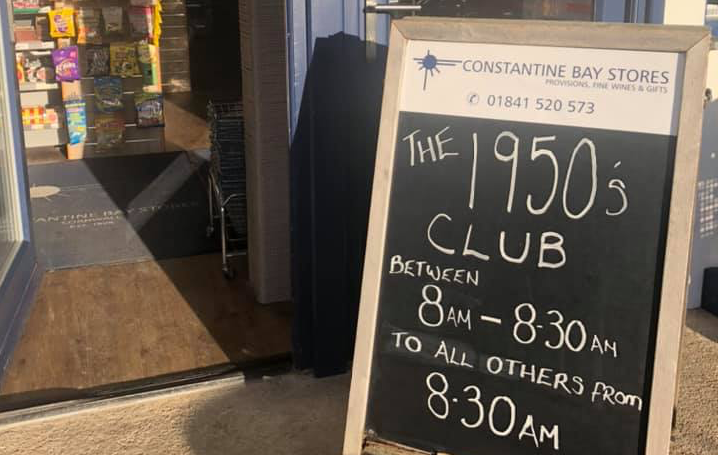 Constantine Bay Stores in the U.K.

Last Thursday, medical experts from China landed in Rome with a supply of masks, respirators, and other supplies to help fight COVID-19. The flight was organized by the Chinese Red Cross and brought around 30 tons of equipment to Italy. Besides China, where new cases now seem to be declining, Italy is the worst-hit country in the world.

Quarantined residents sing from their balconies

Amid a lockdown, Italians across the country took to their balconies to sing together last week, closing the distance between them with music. Communal singing also brought people together in Lebanon and Israel. Over in Spain, people in one apartment complex even joined together for a group fitness class at a distance, squatting and doing jumping jacks from their balconies.

Health care workers get a round of applause

In another display of solidarity-from-balconies, Spanish people emerged at 10 p.m. one evening to give a roaring applause to the heroic work of health care workers during COVID-19. The same also happened in Italy, Portugal, and the Netherlands.

NBA games have been suspended for 30 days, which means no work for arena employees like ticket takers, food vendors, and performers. But at some arenas, players and team owners are donating hundreds of thousands of dollars to make up their wages.

Companies offer free services and entertainment for the homebound

To keep us all entertained while we hunker down at home, companies ranging from Internet providers to orchestras are offering their goods and services for free. The Metropolitan Opera in New York City, for example, is streaming operas each night until they reopen.

Penguins enjoy a private tour of the aquarium

It may not be an act of heroism, but it’s certainly making people smile: The Shedd Aquarium in Chicago is letting some of its rockhopper penguins roam free and take a tour of the place, just like humans normally do. The lucky penguins include a fellow named Wellington and the bonded pair Edward and Annie.