I don’t know about you, but I’m pretty crushed by all of the bad news these days. Frightened children separated from parents at the U.S. border; politicians involved in money laundering and sex scandals; gun violence in schools. Reading these stories makes me feel hopeless and helpless, not to mention angry and disconnected from my fellow citizens.

That’s why I need some inspiration right now, to motivate me to stay true to my values of caring for others’ welfare and fighting for what’s right. One way to get there is through moral elevation. 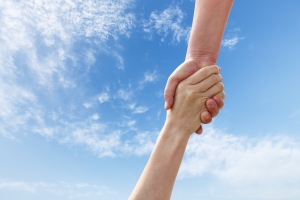 What is moral elevation? It’s that warm feeling we get when we witness someone engage in morally courageous acts, like rescuing a stranger from a fire or giving up a lucrative career for a greater cause.

“Moral elevation not only boosts our positive emotions, but it also promotes our love for our fellow human and inspires us to be better people,” says University of Portland researcher Sarina Saturn. “Indeed, making an effort to experience more moral elevation will restore our faith in humanity and encourage us to help other people.”

Witnessing acts of goodness seems to drive us to take better care of ourselves, too. One study by Jason Siegel and colleagues found that experiencing elevation motivated depressed people to want to seek treatment. Why might that be? It’s possible that elevation stimulates oxytocin release and vagal nerve activation, which can help people feel more warm, expansive, and trusting of others. Or perhaps moral elevation might help turn one’s attention toward others and away from oneself, which could decrease obsessive focus about all that’s going wrong in one’s life—something associated with depression.

Given the times we are in, it makes sense that some of us feel down and experience a sense of helplessness or dread. However, infusing inspiration into our lives could help us to protect our own mental health while we continue to fight for our moral values and adhere to doing what’s right.

How to do that? Here is what Siegel and Saturn recommend.

1. Be a proactive consumer of different types of media

News is going to focus on the most sensational stories—if it bleeds, it leads. So, you need to take greater control of the media you are consuming and to actively seek good news.

“There are incredible stories of people who overcome obstacles, of people who engage in acts of moral beauty on a daily basis—teachers, police officers, firefighters, you name it,” says Siegel.

Seek these stories out. If you don’t know where to look, try googling “heartwarming stories of people giving to others” or “random acts of kindness” or read stories from the Greater Good. Here are a few links to videos and websites that Saturn recommends:

Tapping into these inspiring stories is likely to increase your feeling of connectedness and caring about others—especially when you see how many other people have done the same!

It may feel good in the moment to argue with people who disagree with you on social media in a tit-for-tat exchange, but you’re probably not going to change anyone’s mind.

Instead, try posting positive stories about what’s going on in the world. Even if people support some policy that you find deplorable—like travel bans against Muslims—you can share stories of moral courage instead of getting into a battle of words. Though there will always be cynics who won’t see the good in any moral act, says Siegel, most people will be moved by stories like these…and may even experience decreased bias.

Plus, you will feel better for having shared something hopeful rather than spiteful, at least in the long term.

3. Get involved by volunteering to help those in need or joining a movement

Volunteering is good for your well-being. You might hear “thank you” from fellow volunteers and the people you’re helping—and witnessing others “pay it forward” can be incredibly inspiring. This can lead to expansive feelings of being part of something greater than yourself.

And though it may seem insignificant at times, attending rallies, signing petitions, putting up signs, and calling your government representatives can be elevating too, says Saturn.

“It is morally elevating to be surrounded by like-minded people coming together for a cause that they care deeply about,” she says.

Volunteering and political participation may not always inspire you, of course. People might argue and snap at each other, and there can be moments when it feels pretty thankless. But the research suggests that you’ll still experience a net gain in well-being—and sometimes the struggles you face will make your efforts even more meaningful over the long run.

“Science shows that when we are too consumed by our own stress and negativity, it is very difficult to step outside of our own funk to care about others’ plights,” says Saturn. That means we need to take better care of our own mental health and stay open to what’s going on around us.

One way to do that is to practice mindfulness meditation, which has been tied to stress reduction, increased attention, and the willingness to help others.

“Mindfulness practices allow us to be fully present in the moment and open our capacity to be open to moral elevation stimuli,” says Saturn.

5. Make moral elevation a part of your everyday emotional hygiene

Instead of checking your emails or the news headlines first thing in the morning, take 20 minutes or so to seek experiences of moral uplift. Just like going to the gym or meditating, a habit of moral elevation will have better results than an occasional elevation experience.

“If you don’t make it part of your schedule—if you don’t say that this is an important part of your life—you’re not going to get to it,” says Siegel. “There will always be something else to do.”

Saturn recommends not only seeking daily moral elevation ourselves, but spreading it around to others, too. “Moral elevation has been shown to promote altruism and it is very contagious,” she says. “So, make an effort to shine some light on some of the wonderful things the human condition is capable of doing.”

By adding more moral elevation to our lives, we can all find hope in the midst of darkness and not give up on humanity. Who knows? If we take the research to heart and make moral elevation a part of our daily routine, we may even be moved to become the next hero in a morality tale yet to be written.