Several years ago, when my son was a preteen, I worried he was addicted to video games. I remember looking into his room and seeing his tiny body in an oversized office chair. He sat there for hours, wearing gigantic headphones and shouting to his fellow players while his fingers moved the gaming mouse. 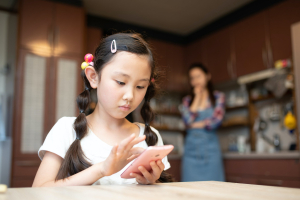 I told myself it was social. At least when he was playing the game, he was interacting with the other people playing the game with him. Some days he watched YouTube videos of other gamers playing “Minecraft,” another activity that seemed both obscure and excessive. Yes, he received exceptional reviews at every parent-teacher conference, slept at least eight hours a day, and was able to look adults in the eye when speaking with them. I still gave in to the fears that parenting in the digital age engenders.

Worried about my child, I eventually looked to what I felt to be the best guide: data and social science research. I’m a psychologist who studies media and adolescence, so I turned to science to help me understand if my son was in true trouble. As I dug deeper into the research and talked with other adults (conversations that often happened online…our kids aren’t the only ones living in the digital age), I realized many caregivers shared my fears.

How can we tell if our kids have a healthy relationship to technology? And what steps can we take to make sure their online life isn’t hurting their well-being? A new study offers some guidance.

So many people throw around the word “addiction,” but true addiction to technology will not be the problem for the majority of children. I quickly figured out my son was not an addict, one big worry off my list. Sure, he loved playing video games and played them nonstop, but he still came down for family dinner, interacted with friends at school, and was physically healthy.

Indicators like a willingness to eat and an ability to care about things beyond the virtual world may feel a little wishy-washy. But this is one place where every child is different. Many factors might come into play, including their age and stage of development, so paying attention to your own child and the data is essential.

Recently, I coauthored a study that offers clearer insights when you’re trying to assess your own child’s screen use. The lead author, Megan Moreno, surveyed nearly 4,000 adolescents (13-18 years) and their parents, an unusually large group. Moreno did not have a preconceived hypothesis about digital media being “bad” or “good.” Instead, she asked about both well-being and risky behaviors, and then analyzed the data to look for common patterns.

Two distinct groups emerged. One group, the majority (63%), were just fine. Their relationship with technology did not seem to impact their lives; for example, they had positive health and well-being, with indicators such as less anxiety and more sleep. A key factor was how the teens engaged with their families in relationship to technology. Parents and guardians were in conversation with their kids about the content they watched or played and about their online lives.

This group reported that they had strict rules about the kinds of content they accessed rather than strict rules about how much time they were allowed to spend on screens. This echoes what the American Academy of Pediatrics and many other experts (including myself!) have been advising parents for years. Parents and guardians in this group also monitored their own technology use. Specifically, they spent less time posting and checking their own social media.

The other, smaller group in Moreno’s study (37%), however, had a more problematic relationship to technology and exhibited other less healthy behaviors compared with their peers. For example, they slept less and reported poorer body image. Technology was clearly a factor in these outcomes, but, again, it was related to family behaviors. In this group, parents had strict time rules around their children’s access to video games and social media, but they did not create strict content rules. This was the exact opposite of the first group.

Parents in this group also used social media more frequently, which may be why the teens reported lower communication with their parents. This finding is echoed by a teen who told us about his media life. DS, age 15, said, “My mom’s constantly on her phone, most of the time it’s like she doesn’t even hear me, so I just go on my phone, too.” Adolescents in this group also said they received their first cell phones either before the age of 11 or after the age of 15, suggesting either a laissez-faire or a restrictive parenting style.

Back when my fears about technology were strongest, I tried to compartmentalize my worries and trust the science. Occasionally, though, the fear returned, especially when I thought of my son’s future. What about when he went off to college? Would he control himself without a parent yelling at him to take a break? Do they make parental controls that will let me send in-game messages reminding him about the importance of sleep and exercise and homework?

When children have issues, media is often the first scapegoat adults point to. Violent video games are blamed for school shootings, and social media and smartphones are blamed for the mental health crisis. Yet research shows that many bigger issues affect young people—inequality, climate, education, and so much more.

During the pandemic, social media was a lifeline for those who felt isolated or bored at home. And for young people, connecting to their friends, whether in-person or virtually, is appropriate to their stage of development. So if you are like I was and worry about your child’s screen time, I recommend you look at the bigger picture and rely on the science. You might just help your child develop the tools to fall in the group of kids who use technology in a positive way—or, at the very least, ease your fears.

Given Moreno’s study and others like it, it’s good to know that a few key actions can help your child thrive in the digital age.

1. Create and maintain household rules centered on content and communication. The American Academy of Pediatrics has a tool to help create these rules; it can help you decide what your child is allowed to do on their own and what to ask permission for. Ask your child about what they are playing or watching and try to truly engage in their media world. Be open to their point of view and allow them to contribute. And if you are worried that your child is spending too much time on a screen, your family doctor can help you understand whether you should seek other professional support.

2. Be aware of your own technology use, particularly at home and when using social media. Are you looking at your screen when your child asks you questions or tries to get your attention? If so, put down your device and give them undivided attention. This kind of role modeling can go a long way in shaping their use. Are you posting photos of your children online? If so, make sure you ask their consent to help them understand the importance of taking a moment to reflect before posting.

3. Start early and develop your child’s own critical thinking and agency. Teaching your child how to make their own choices, even when you are in full control of their media use, will go a long way toward helping them self-regulate as they get older. Use positive consequences to motivate them to think through their own choices (for example, if they get off the screen on their own, they can have an extra half hour on the weekend). Train them to think about the content they consume, by talking to them about why you said yes to one piece of media and no to another, so they can start to internalize your values.

I also spoke to my son about his media use, and together we created a family agreement. And, as the science predicted, he is currently a healthy older adolescent; in fact, we now credit his video gaming to developing his interest in history. He just completed his freshman year of college with straight As and a broad and diverse friend group. In addition to studying, they spent the first year exploring the city, going to rock concerts, and biking through Central Park. My fears of his spending his college years on screens were understandable, but unfounded.