Half of parents today think that their children are addicted to smartphones, and these parents are concerned about how mobile phones will affect their kids’ mental health, according to a new survey from Common Sense Media and SurveyMonkey. Each day, we hear that smartphones and social media are making our children—particularly teenagers—lazy, addicted, lonely, uninterested in having sex, too interested in viewing sex, and unable to function in the real world.

But our fear is misplaced; there is no compelling evidence that spending time online has a deleterious effect on teens’ mental health. 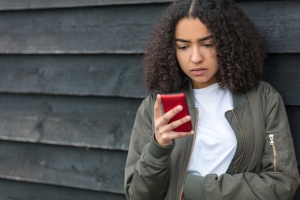 Young people today represent one of the most educated, least violent, and most socially connected generations the world has seen. Before you assume that I am being paid by a tech giant or have some Pollyanna view of adolescents, I should disclose that I am a psychologist and have spent my career studying mental health problems among young people. Mental disorders represent a real problem for a significant number of kids—up to one in five children under the age of 18 suffers from a mental disorder—and this was true long before smartphones were placed in their hands.

That’s why reports that smartphones are causing mental health problems among adolescents have caught my attention. If true, this link would be a major breakthrough in clinical practice. Parents, clinicians, and educators would have an easily identifiable target for addressing mental health problems among teens. It could revolutionize our prevention efforts and save lives.

It was disappointing, then, to learn that smartphones are unlikely to blame for this generation’s reported increases in serious mental health problems like depression. There is no good evidence yet that smartphone or social media use is driving these increases. When I looked past the headlines and at the data, I usually found no association between time spent online and mental health for most teens. When there was a link, it was tiny, with an unclear relationship between cause and effect.

Does this mean that paying attention to the amount of time teenagers spend glued to their devices does not matter? Absolutely not. Future studies may uncover negative effects; as of now, there are very few rigorous, large-scale studies available. This needs to change so we can responsibly monitor and respond to any risks.

In the meantime, we do know that young people who are already vulnerable or struggling in their offline lives receive less guidance navigating the online world. Parents in wealthier homes are more likely to actively mediate their child’s online activities—by talking about them, suggesting ways to use the Internet more safely, or joining in.

Among wealthy nations, income gaps in Internet and device access are shrinking, but a new type of digital divide is emerging. Youth in higher-income homes spend more time than disadvantaged kids in reading the news and searching out information online. In the U.S., teens in low-income families spend a greater share of time online using social media and watching videos. Teens from low-income families are more likely to report negative digital experiences such as cyberbullying, and social media experiences that spill over to create problems at school and with peers.

For parents and teachers, this means that phones may serve as mirrors reflecting problems or struggles that would otherwise be missed. It also means that already vulnerable teens may require additional support. A growing opportunity gap in access to resources, opportunities, and adult investment has emerged over the last 25 years as income inequality has accelerated, especially among families with children. It would be sad indeed to see this gap replicate itself in the online world.

The digital world is not creating a new species of teenagers. Many things that draw teens to smartphones—the need to socially connect, seek novel experiences, and learn about the world—are the sorts of things they have always sought. Just as in the offline world, there are light and dark places online that young people need our help to navigate.

But to effectively guide them, we will need to stop screaming about smartphones and start collaboratively building a digital world based on evidence—not fear. While adults obsess about teens and screen-time, real threats around data security, privacy, and loss of autonomy will continue to go unchecked. Worse, it could cause us to miss the real determinants of mental health problems among our kids.

So does all of the worrying about teenagers and their smartphones matter? Maybe. But likely not in the way we would expect. It turns out that parents spend far more time arguing with their kids about how much time they are spending online than they do discussing with them what they’re doing online. It’s time for a different approach.

This article was originally published on Fortune. Read the original article.