Last fall, the Millennium School surveyed its parents about the most pressing issues at home they needed our help facing—and they asked overwhelmingly for guidance on social media rules and limits. 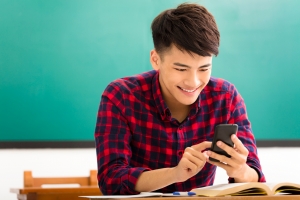 But we didn’t want to merely tell parents and students what to do. Our response was to build a Quest—what we call our multi-grade, inquiry-based classes—on the neuroscience of social media. After studying the topic for six weeks, students demonstrated their learning by presenting their own guidelines for “right use,” including categories like respect for others, safety and well-being, and setting appropriate limits. The idea was to turn this potentially fraught meeting ground into a conversation, and to give kids the opportunity to lead it with knowledge and integrity. What we learned is that this degree of ownership makes all the difference.

Typically, it’s the adults who offer warnings and recommend guidelines for staying healthy online. But the Quest culminated in our school’s gym one night in February with a parent education night—and it was the kids who did the teaching. All of us need to hear what they had to say.

The benefits of social media

Apart from the current political fury surrounding social media, the question of its effects on young people is hotly debated in part because it is still so new. Books like Sherry Turkle’s Alone Together argue that widespread use of smartphones among teenagers promotes antisocial behavior and addiction. Yet one risk of this critical stance, says University of Newcastle researcher Laura Gray, is that we might be overlooking the “educational and psychological benefits of using social media sites,” such as developing critical thinking and perspective-taking skills. By implication, she and other more pragmatic analysts assert that parents and educators have been led to demonize what could simply be an evolving means of social connection.

Indeed, at a time when few can imagine life without a smartphone, it is soothing to think that the recent concern over social media might be overblown. Yet the facts of our collective experience add up daily, in public and in private. Hardly anyone with a smartphone can claim immunity to what is increasingly being recognized as digital addiction—or, at best, a constant stream of interruptions. Particularly since the 2016 election, former insiders and investors have voiced very public alarm about the design techniques and business incentives that drive the most successful tech companies. Tristan Harris, the former design ethicist at Google, has become a prominent critic of what he calls the constant shredding of our attention, and his Center for Humane Technology speaks for what could become a new movement to conceive right use as a genuinely social imperative for the digital age.

To differing degrees, we are probably all struggling to balance what our devices make possible with what they seem to impose on our attention spans and the rest of our health. Yet, for children, this difficulty is more acute because their bodies and brains are still developing.

The daily struggle for right use

So, what did the students of the Millennium School have to say at parent education night?

Addressing an audience of their fellow 6th and 7th graders, parents and teachers, students stood before a montage of provocative images. In one, a boy’s face and shirt are covered with brown dust as he pours cinnamon down his throat. The expression on his face is blank. In another, a young man holds a spoonful of laundry detergent pods, smiling as if posing for a cereal commercial. This one, called the Tide Pod challenge, is among the most popular, the students told us. Since it was noticed on social media, they said, numerous children have been poisoned by actually eating Tide Pods. The reason? Because they are brightly colored and show up well in photos.

It felt like a public service announcement, issued by teens and preteens. The students introduced their presentation with the question, “What Are Ways to Stay Healthy While Using Social Media?” They had clearly done their homework. In addition to describing these challenges, the students covered the dangers of cyberbullying and what they poignantly called “romanticizing mental illness.” We learned that some websites, frequented by young girls, advertise memes such as “Eat less,” and “I’m jealous of people with enough self-control to be anorexic.” Why? Because they help sell stylish T-shirts.

After this group finished their presentation, the audience broke into small discussion groups led by other students in the audience. In neat stacks on seven tables, The Millennium School Guidelines for Social Media were waiting. Two students at each table would ask questions, track the conversation, and gather feedback. This activity was likely one more entry point into many future family discussions of technology and screen time. But by making it shared and putting students in the driver’s seat, this part of the evening was designed to heighten awareness of our multi-generational love of screens and encourage kids and parents to face it together.

None of us know the full extent of how our digital dependence is affecting us, or how it will affect the youngest generations growing up today. The least we can do is look up every now and then to ask each other how we’re doing, and how we can do better. The Millennium students who confronted the evidence around them recently did so with courage and candor. However, six weeks after their social media Quest ended, we notice that many are still hooked to their phones, often at inappropriate times.

Of course, they’re not alone in this struggle to practice what they preach. One morning, a few weeks before the parent ed event, I was caught walking down the street texting on my way to school. When I arrived, five or six students immediately confronted me, relishing the opportunity to call me a hypocrite. Of course, I was acting hypocritically, I told them. I should not have been looking at my phone while crossing the street. Especially while teaching a class on the dangers of social media. But it was an old friend’s birthday, and I really wanted to send him a long text before I got to work. We all have our excuses, and I was simultaneously proud and annoyed that they didn’t buy this one.

Right use won’t happen on its own. But it can emerge as a common ethic when we talk about it. More conversations, especially between kids and parents, shift power away from technology and put it back into the hands of the people supposedly using it. Then it’s up to us to stick to what we say is good for us. With loving reminders from our peers, our parents, our kids, our teachers, and our students.