Every year in late spring, people from around the world choose to take a fresh look at their relationship with electronic media. They do so by participating in Screen-Free Week, which this year starts on April 30. This annual “media detox” began in 1994, when it was called TV-Turnoff Week, and has found renewed relevance in the age of smartphones. 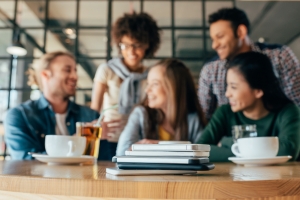 As our relationship with mobile devices has grown, the research evidence has mounted: Excessive media use is not good for us physically, mentally, or emotionally. The good news is that taking a media break is a powerful way to improve our well-being. I’ve been assigning a four-day media fast in my undergraduate psychology classes for many years, and I’ve witnessed the effects firsthand. Based on the research and my teaching experiences, I’ve compiled these five reasons to participate in Screen-Free Week and take a break from media.

The vast majority of American adults carry cell phones on their person throughout the day, rarely turning them off, according to a 2015 report by the Pew Research Center. It is no surprise that incoming texts, emails, and notifications are a near-constant presence for many people.  Our moment-to-moment experience is being fragmented on an unprecedented scale.

When I assign the media fast in my classes, I know that a “cold turkey” fast is unrealistic for most students. Their phones and computers are their main links to family, friends, schoolwork, and other commitments. Most will need to check and reply to messages at least once a day. In the fast, I emphasize the importance of breaking the constant checking habit and removing their devices from the flow of their daily experience: during class, in the transitional moments walking from one place to another, in their moments of downtime when they so often turn to their phones to fill in the blank spaces of their lives.

When students write about their experiences on the fast, one of the most common themes is “present-moment awareness.” Using a range of terms such as presence, sensory awareness, mindfulness, immersion, and flow, fully half of the students spontaneously describe these experiences as a hallmark of their fast, which typically kick in after a day or two. As children of the smartphone age, some of them were experiencing long periods of uninterrupted attention for the first time in years, episodes of micro-mindfulness that can be deeply nourishing. As one young woman reported:

During my walks from my dorm to my classes, I took my time breathing in the fresh air. Focusing on my breath helped me savor my time being outside and eased my anxiety about not being on my phone. By the time I got to class I had become so consumed with my breathing and sense of place I forgot about my phone altogether.

Electronic media is not your friend when it comes to getting a good night’s sleep, especially if it’s used in the hours close to bedtime. This is partly due to the physiological effects of the “blue light” of the screen, which impacts the brain’s production of melatonin, delaying the onset of sleep. In one study, for example, people reading on an e-reader at night, compared to those reading a print book, experienced delayed melatonin release, took longer to fall asleep, and felt less rested the next day.

In addition, we have probably all experienced the “quick check” of our phones or computers that inadvertently leads to many unplanned minutes (or hours) of use. When this happens at night, we lose sleep. It’s also increasingly common for people to sleep with their phones nearby, which means that calls and texts can awaken them. Add to all this the likelihood that the emotional tone of media engagement will be stimulating or stressful (work emails, news reports, social comparison on Facebook…), and you have a perfect recipe for sleep disruption.

―A student on a media detox

For all these reasons, many experts are suggesting that we avoid screens in the hours leading up to bedtime as a matter of basic self-care. Sleep is one of the single most important foundations of physical and mental health. The impact on sleep alone would be more than enough reason to undertake a media fast. But there is more.

Social media promises social connection, but the full richness of human relationships is best found face-to-face. Preteens, after five days at a camp without media use, outperformed their peers in recognizing nonverbal cues of emotion, an important foundation for empathy. In both laboratory and naturalistic studies, people felt less connected to conversation partners, and found their partners less empathically attuned, when a cell phone was present during the conversation. This was even the case when the phone belonged to the experimenter, and was outside the direct view of the participant. In particular, the phones’ presence inhibited deeper, more meaningful conversations, which require trust, vulnerability, and undivided attention.

In many of their papers, my students report improved connections with family, friends, and classmates as a benefit of the fast. “Not using my phone while with my friends was a way of working on my relationships, and I noticed a difference between the conversations that night compared to other times,” wrote one young woman. “Breaking away from media allowed me to be more empathetic to not only my own struggles but to others’ as well,” wrote another. One student invited her boyfriend to participate in the fast with her. As a result, she said, “We ended up sharing things about each others’ past that we hadn’t talked about before, so it felt good to get to know him a little deeper.”

Whether we are catching the eye of a fellow student on the way to class, fully acknowledging the cashier at the store, or engaging in an uninterrupted heart-to-heart conversation with a loved one, a break from media allows us to nourish our relationships. We may well be surprised to find ourselves feeling more, rather than less, connected when we disconnect from media.

Any work that requires a focused mind will benefit from a media break. This has been vividly demonstrated in a number of recent studies, summarized by Nicholas Carr in the 2017 essay “How Smartphones Hijack Our Minds.” In classroom settings, he notes, mobile phones disrupt learning through the distractions of “task-switching,” as students text or surf the internet in class.

Moreover, the mere presence of a cell phone, even when ignored, reduces people’s intellectual acuity, possibly because it takes a distracting level of mental effort to resist the pull of a nearby phone. The more distant the phone, the better the performance: When phones were placed in another room, learning improved notably, more than when they were tucked away in nearby backpacks. In a real-life instance, secondary schools in the U.K. that banned phones on campus saw significant increases in student test scores.

In my class media fast, I often hear accounts from students about their newfound ease of learning. Many of them mention improved study skills and less procrastination during the fast.

“I was able to stay on top of my assignments and get all my work done in a more efficient manner and with a lot more focus,” wrote one student. “Being able to see firsthand how my mind was affected by this fast was an eye-opening experience. I could feel how focused my mind was while doing my assignments and how the scattered feeling that I usually feel was completely gone.” In the words of another: “The last day of my media fast … it was almost shocking how quickly I was able to power through assignments.”

Greater mindfulness, improved sleep, deeper connections, and better productivity are significant benefits, but what, if anything, lasts beyond the days of the fast?

We use our devices for a wide variety of reasons—some very straightforward and practical (navigation apps help us find our way) and some more psychologically complex (turning to social media to avoid feelings of loneliness and disconnection). However, the routine of checking our texts, emails, and social media accounts can easily become a self-reinforcing pattern. Media fasts break that habit.

For some students, this interruption is a temporary break. But for others (I’d estimate about one third), the fast is more of a “reset”—a halt in the momentum of media use that creates the opening for lasting change. “The desire that I used to have turned from a loud screaming impulse to a faint whisper,” wrote a student. “The idea of going back to my old patterns and usage of technology did not have the same appeal for me.”

Follow-up research with my students suggests that, for many, the fast has an impact that goes well beyond its four days. A month later, students reported a moderate level of ongoing change in their media use. They limited their media in specific settings (such as before bedtime, or while doing schoolwork, spending time with other people, or driving) and continued to use strategies to limit media use (such as moving apps to a less accessible spot or deleting them from the phone). They felt less dependent on media in general. Others expressed the intention to undertake periodic media fasts on their own in the future. Interviews conducted six months later revealed that some students were still experiencing changes in their media use:

Whether as a temporary breather or an opportunity to create enduring change, there is much to be gained from a media fast. And there is no need to go it alone. By participating in a collective effort like Screen-Free Week, you can give and get the social support that is so helpful in making significant change. Avail yourself of the resources at www.screenfree.org—and consider getting close friends, family, and household members to join you in this powerful effort to reclaim our collective well-being.