This month, more than a dozen wealthy parents will appear in a Boston federal court, accused of using a criminal “side door” to get their kids into prestigious schools. Among those on the U.S. attorney’s star-studded list of indictments are Lori Loughlin, who played Aunt Becky in Fuller House, and Felicity Huffman, a Desperate Housewives regular. These parents bribed coaches with hundreds of thousands of dollars, took fake recruiting photos, and had their kids cheat on tests, all to score admission to schools like Yale, Stanford, and the University of Southern California. 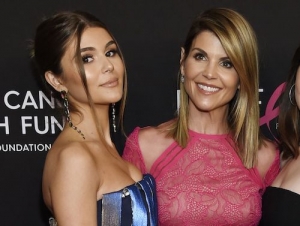 While they might seem irrationally status-obsessed, they’re not outliers. The allure of brand-name schools was strong when I applied to colleges as a teenager. In my competitive high school, it was almost a given that you’d attend the most selective college you could get into, whether or not it was a good fit. Like Loughlin, Huffman, and thousands of frenzied applicants everywhere, I didn’t think to question this status hierarchy. Instead, I worked my tail off to secure my place in it.

As the research reveals, we all have a basic craving to be seen as special and successful, one that can come to include our children if we lack the boundaries to distinguish their accomplishments from our own. So, where does ordinary striving cross the line into pathology—chasing status so frantically you’d steamroll over your own integrity? Do the rewards of high status justify taking extreme measures to get there? Do we have an alternative to status-seeking—a pathway to fulfillment that brings out our best, not our worst?

The origins of status anxiety

Grabbing the brass ring of status can be a sensible move, up to a point.

As the philosopher Alain de Botton notes, the higher other people’s opinion of us, the better they tend to treat us—a correlation with stark real-life consequences. Studies show that people in lower-status groups have higher levels of depression and suffer more from chronic disease. “Those without status are all but invisible,” de Botton writes in Status Anxiety. “They are treated brusquely by others, their complexities trampled upon and their singularities ignored.”

Meanwhile, those with status may seem to coast through life pampered and worry-free, piling up Instagram likes and corporate sponsorships. Historically, people have trod a few more-or-less-reliable paths to high status: being born into the right family, offering a valuable service to the community, or accumulating money and influence.

But not only has the modern quest for status become more complex, it also has record-high stakes built in. University of Amsterdam researchers report that in cultures where there is a profound gulf between haves and have-nots, as in many Western countries, the background hum of status anxiety is more intense. The fear—an all-too-understandable one—is that any status loss will involve a precipitous drop, emotional as well as financial.

Our hunger for worldly status, now as in the past, is rooted in our tendency to value other people’s opinion of us more highly than our opinion of ourselves. The most dogged status-seekers, observes Delaware psychologist Michael Hurd, have a strong “external locus of control”—a belief that the world revolves around what others think of them, rather than what is objectively true or valuable.

It’s healthy to feel like you’re productive and making a worthwhile contribution to society. In that case, you might acquire status as a natural result of your commitment to something larger than yourself.

However, playing the status game—in other words, staking your self-worth on how others view you—is ultimately self-defeating, as a large body of research shows. Tirelessly pursuing high status is associated with a number of adverse health outcomes, including aggression, addiction, and depression. “If status is your primary goal,” Hurd writes, “you’ll be unhappy without it and you’ll be unhappy once you acquire it.”

Another problem with status obsession, as the admissions fiasco proves, is that it can entice you to stray from your deepest values. When someone else’s assessment of you—or of your children, perhaps as an extension of you—matters more than your own assessment of yourself, you’ll be all too ready to sacrifice the latter on the altar of the former.

Episodes like the college-admissions scandal also reveal that people’s frantic efforts to secure status are becoming increasingly unmoored from reality. Perversely, many of the parents charged in the admissions case had already reached forbidding levels of social status. For these parents to take such extreme measures on their children’s behalf, it might seem there’d have to be a huge guaranteed reward in the offing.

Unfortunately for them, attending an elite school is far less tied to success or quality of life than most people assume. In a National Bureau of Economic Research study by Alan Krueger and Stacy Berg Dale, students’ motivation and hunger to learn predicted their future earnings far better than what school they had attended. Those who went to schools like Harvard or Stanford, Krueger and Dale write, did not boast higher earnings than students of similar ability who went to less selective schools.

How to bring out your best

Their fundamental merit aside, brand names and numbers appeal to us because they broadcast status to others—and to ourselves—in ways that are immediately apparent. A high Twitter follower count, a couture logo on a shirt pocket, and a kid who attends a prestigious college can all seem like convincing proof that we matter in the world.

I succeeded in my quest to be accepted to a high-prestige school—but as I grew older, I realized that while logos and brand-name schools might confer some degree of instant cachet, what I really wanted was a different kind of status. When I wrote a book about heroism, I immersed myself in the stories of people who’d reached rarefied status of their own by elevating their highest principles, and the well-being of others, above traditional status concerns.

As it turns out, most people admire this kind of moral status even more than they do gaudier status markers. When University of Richmond psychologist Scott Allison asks people to name their personal heroes, those who shine brightest in their own lives, they tend to cite family members or caretakers who embody generosity, dedication, and love—not tycoons, famous academics, or celebrities with millions of followers.

Research by Stanford University sociologist Robb Willer supports the idea that selflessness can secure the kind of status that breeds satisfaction. Willer devised an experimental game where players could choose whether or not to support other players. The group members who were most generous also enjoyed the highest status in the group, as measured by their reputation within it and their ability to influence its members. Willer’s study suggests that those who seek lasting respect should look for ways to help others in their community—the opposite of the dog-eat-dog status ploy the parents in the admissions scandal chose.

Not only does their approach fail over the long run, there’s always the risk it might backfire spectacularly, as Lori Loughlin’s vlogger daughter Olivia Giannulli can attest to. Giannulli, whose parents had her pretend to be on the crew team to get into USC, has already left college for good, and her sponsors have been dropping like flies. In trying to secure a status crown Giannulli never really wanted, her parents blocked the less conventional path she’d been charting all on her own.

Opting out of the traditional status game begins with the awareness that it is completely up to us how we define our value. For my part, while I want my sons to try their best in school, I’ll be rejecting the cultural messaging that says you have to have a certain name on your diploma, or a credential on your resume, to be worthwhile. I’m going to trust them to carve out their own version of a life that matters—and trust myself to do the same.