Schools are supposed to help students learn right from wrong. Right? Yet a 2012 study found that nine out of ten high school students in the United States admit to having cheated, and that’s really a problem when we consider prior research suggesting that youth who cheat are more likely to cheat as adults. Indeed, the recent school-testing scandals in Atlanta and Washington, D.C., show that even some adults in schools aren’t immune to cheating, either. 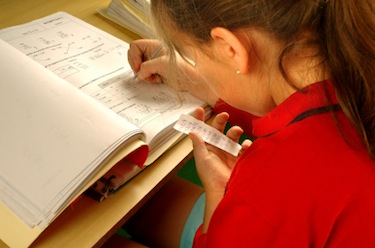 Why do kids (and adults) cheat? Conventional wisdom is that we cheat to get ahead and don’t really understand the right vs. wrong way to get there. But in reality, cheating goes beyond just the desire for a better grade.

Some students cheat because of the enormous pressure to succeed placed on them by parents and teachers; others cheat because they’re afraid of failure. Granted, a handful of students just might not understand right from wrong, and for them we need basic moral education. But for many students, perhaps most, it’s not enough simply to say that cheating is wrong and expect them to follow the rules. Instead, we have to address the deeper beliefs and emotions that impel students to cheat even though they know it’s wrong—then work with them to develop the skills that can help them resist the impulse to cheat when tempted.

Fortunately, research points to an important—if unexpected—tool in the battle against cheating: mindfulness, the moment-by-moment awareness of our thoughts, sensations, and feelings. As far as I know, no research to date has explored how mindfulness may prevent cheating in schools. But when you look at new studies on how mindfulness affects our brains and behavior, it’s striking to me that many of the skills enhanced by mindfulness are the same skills kids need in order to resist the impulse to cheat.

Based on this research, here are three ways that mindfulness can reduce cheating.

1. Mindfulness makes the unconscious conscious. When asked why they cheated, some students say, “I don’t know. I just did it”—and that actually may be the truth.

Yet research suggests that students who can honestly answer that question—i.e., the students mindfully aware of their own thoughts and motivations—may not cheat in the first place: A recent study found that university students who showed greater mindful awareness were less inclined to cheat.

So how exactly does mindful awareness encourage students to not cheat? Psychologists have discovered that when people act unethically, they often find ways to rationalize their behavior by downplaying their offense and its impact on others. For example, a student who cheats on a test may justify his actions by saying, “It’s not like anyone died,” or by blaming his teacher for failing to explain the relevancy of the material to students’ lives.

The challenge is that these choices are often unconscious—students don’t even realize that what they’re saying is just an attempt to excuse the inexcusable. Therefore, cultivating students’ mindful awareness can tune them into the thought processes behind these choices, bringing to the surface their true motivations—and help them make a more honest decision about whether violating their own moral code is actually worth the “A”.

2. Mindfulness enhances self-control. Sometimes cheating is an easy way out—particularly when students feel overwhelmed by the pressure to succeed from parents and teachers.

Imagine it’s midnight and you’re a high school student who still has to complete an hour-long homework assignment for math class. Math isn’t your favorite subject, but your parents and teacher tell you that without an “A” in the subject, you won’t get into a top university and you don’t want to disappoint them. You’ve been working hard for hours, and your bed is starting to seem mighty tempting. Wouldn’t it just be easier to copy the answer key in the back of the textbook?

Controlling these kinds of impulses can be tough for all of us, especially teenagers whose pre-frontal cortex—the part of the brain that is associated with self-control—is not yet fully developed. However, scientists have found that the practice of mindfulness can actually strengthen the neural circuitry in this part of the brain to help build self-control. One study found that even a brief period of mindfulness practice can strengthen self-control and enable us to stop ourselves from doing what we know we shouldn’t do—even when we’re feeling taxed and our willpower is depleted.

3. Mindfulness is essential to self-compassion. Some students cheat because they’re afraid to fail. Instead of seeing failure as an opportunity for growth—saying to themselves, “What can I learn from this failure?”—they take it personally, saying, “I’m a bad person because I failed.” This type of self-criticism is typical in our culture that belittles failure, but these messages are hard to take and can lead to depression, anxiety, or worse.

One of the best remedies for fear of failure is self-compassion—the process of relating to yourself in a kind, supportive, and understanding way. Kristin Neff, the leading scientific expert on self-compassion, has found that people who are high in self-compassion are less likely to fear failure because they know they’re not going to face an onslaught of negative self-talk if they fail. They’re also more likely to pick themselves up and try again.

The practice of mindfulness is one of the best methods for cultivating self-compassion. “Mindfulness helps us to hold our experience in balanced awareness,” writes Neff, “rather than ignoring our pain or exaggerating it.” In other words, rather than getting overwhelmed with negative emotions, students who are mindful can take a step back and respond more compassionately to themselves, as if they were talking to a best friend who’s just failed a test.

Ultimately, the science of human nature tells us that because we are complex human beings, there can be no easy solution to cheating. One size does not fit all. Just promoting honesty as the “virtue-of-the-month” or rewarding positive behavior without also looking at the systems and motives that cause negative behavior in the first place are not long-term solutions.

Instead, we need wiser and more compassionate approaches—such as mindfulness—that take into account students’ deep-seated motivations and emotions.

For more on mindfulness and HOW to cultivate it, check out these Greater Good tips.