Do you teach children to lie?

I do. All the time. And you do, too! If you’re like most American parents, you point to presents under the Christmas tree and claim that a man named Santa Claus put them there. But your deliberate deceptions probably go beyond Santa, the Tooth Fairy, or the Easter Bunny. 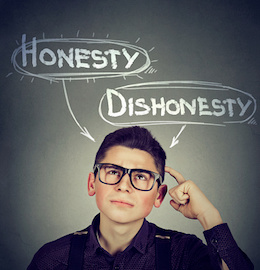 How many of us tell our kids (or students) that everything is fine when, in fact, everything is totally wrong, in order to preserve their sense of security? Have you been honest about everything having to do with, say, your love life, or what happens at work? Do you praise drawings they bring home from school that you actually think are terrible?

We don’t just lie to protect our kids from hard truths, either. We actually coach them to lie, as when we ask them to express delight at tube socks from Aunt Judy or Uncle Bob’s not-so-delicious beef stew.

These are what scientists call “prosocial lies”—falsehoods told for someone else’s benefit, as opposed to “antisocial lies” that are told strictly for your own personal gain.

Most research suggests that children develop the ability to lie at about age three. By age five, almost all children can (and will) lie to avoid punishment or chores—and a minority will sporadically tell prosocial lies. From ages seven to eleven, they begin to reliably lie to protect other people or to make them feel better—and they’ll start to consider prosocial lies to be justified. They’re not just telling white lies to please adults. The research to date suggests that they are motivated by strong feelings of empathy and compassion.

Why should that be the case? What is going on in children’s minds and bodies that allows this capacity to develop? What does this developmental arc reveal about human beings—and how we take care of each other? That’s what a recent wave of studies has started to uncover.

Taken together, this research points to one message: Sometimes, lying can reveal what’s best in people.

How we learn to lie

At first, the ability to lie reflects a developmental milestone: Young children are acquiring a “theory of mind,” which is psychology’s way of describing our ability to distinguish our own beliefs, intents, desires, and knowledge from what might be in the minds of other people. Antisocial lying appears earlier than prosocial lying in children because it’s much simpler, developmentally; it mainly requires an understanding that adults can’t read your mind.

But prosocial lying needs more than just theory of mind. It requires the ability to identify suffering in another person (empathy) and the desire to alleviate that suffering (compassion). More than that, even, it involves anticipation that our words or actions might cause suffering in a hypothetical future. Thus, prosocial lying reflects the development of at least four distinct human capacities: theory of mind, empathy, compassion, and the combination of memory and imagination that allows us to foresee the consequences of our words.

How do we know that kids have all of these capacities? Could they just be lying to get out of the negative consequences of telling the truth? Or perhaps they’re simply lazy; is it easier to lie than be honest?

For a paper published in 2015, Harvard psychologist Felix Warneken had adults show elementary-aged children two pictures they drew—one pretty good, one terrible. If the adults didn’t show any particular pride in the picture, the kids were truthful in saying whether it was good or bad. If the grown-up acted sad about being a bad artist, most of the kids would rush to reassure her that it wasn’t too awful. In other words, they told a white lie; the older they were, they more likely the kids were to say a bad drawing was good. There were no negative consequences for telling the truth to these bad artists; the kids just wanted these strangers to feel better about themselves.

In other words, says Warneken, it’s a feeling of empathic connection that drives children to tell white lies. In fact, children are trying to resolve two conflicting norms—honesty vs. kindness—and by about age seven, his studies suggest, they start consistently coming down on the side of kindness. This reflects increasingly sophisticated moral and emotional reasoning.

“When is it right to prioritize another person’s feelings over truth?” says Warneken. “Say, if someone cooks something for you, and it just doesn’t taste good. Well, if they’re applying for cooking school somewhere, the prosocial thing is to be honest, so that they can improve. But if they just cooked it on their own just for you, then perhaps it’s better to lie and say it tastes good.”

It’s a good sign, developmentally, when kids show the ability to make that kind of calculation. Indeed, there is a great deal of evidence that we tend to see prosocial lies as the more moral choice. For example, people seem to behave more prosocially—more grateful, more generous, more compassionate—in the presence of images depicting eyes. While one would expect people to lie less under the eyes, in fact it appears to influence what kind of lie they tell: When Japanese researchers gave students an opportunity to make someone feel good with a lie, they were much more likely to do so with a pair of eyes looking down on them.

No eyes? They were more likely to tell the cold, hard truth!

How lies change as we grow 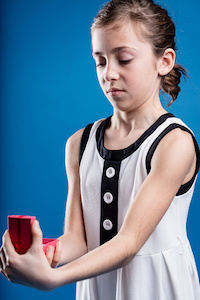 This moral self-consciousness appears to grow in tandem with the child’s self-control and cognitive ability.

Another study published last year in the Journal of Experimental Child Psychology found that “children who told prosocial lies had higher performance on measures of working memory and inhibitory control.” This especially helped them to control “leakage”—a psychologist’s term for inconsistencies in a fake story.

To tell a prosocial lie, a child’s brain needs to juggle many balls—drop one, and the lie will be discovered. Some children are simply better truth-jugglers than others. Far from reflecting laziness, prosocial lying seems to entail a great deal more cognitive and emotional effort than truth-telling. In fact, one 2014 paper found tired adults are much less likely to engage in prosocial lying.

Kids also gradually become more likely to tell “blue lies” as they advance through adolescence: altruistic falsehoods, sometimes told at a cost to the liar, that are intended to protect a group, like family or classmates. (Think: lying about a crime committed by a sibling, or deceiving a teacher about someone else’s misbehavior.)

Though adults can (and do) teach children to tell polite lies—and in a lab context, kids can be primed by adults to tell them—Warneken says it’s more likely that successful prosocial lying is a byproduct of developing other capacities, like empathy and self-control. When kids acquire those skills, they gain the ability to start telling both white and blue lies.

But how do other people feel if these lies are found out?

The lies that bind

As they grow older, kids are also developing the ability to detect lies—and to distinguish selfish from selfless ones. The distinction comes down to intent, which studies show can be discerned through recognition of telltale signs in the face and voice of the liar.

In a study published last year, researchers used the Facial Action Coding System, developed by Paul Ekman, to map children’s faces as they told lies that served either themselves or others. The team, based at the University of Toronto and UC San Diego, found that the two different kinds of lies produced markedly different facial expressions.

“Prosocial lying reflects the development of at least four distinct human capacities: theory of mind, empathy, compassion, and the combination of memory and imagination that allows us to foresee the consequences of our words.”

Prosocial lies (which in this case involved delight in a disappointing gift) were betrayed by expressions that resembled joy—a “lip raise on the right side” that hinted at a barely concealed smile, and a blinking pattern associated with happiness. The faces of children lying to conceal a misdeed showed signs of contempt, mainly a slight lip pucker that stops short of being a smirk.

It’s almost certainly the case that we are subconsciously picking up on these signs (along with tells in the liar’s voice) when we catch someone in a lie. But research finds that the consequences of catching someone in a prosocial lie are often very different from those of an antisocial lie, or “black lie,” as they’re sometimes called. In fact, detecting a prosocial lie can increase trust and social bonds.

A series of four 2015 studies from the Wharton School had participants play economic games that involved different kinds of trust and deception. Unsurprisingly, the researchers found that black lies hurt trust. But if participants saw that the deception was altruistic in nature, trust between game-players actually increased. A complex mathematical 2014 study compared the impact of black and white lies on social networks. Again, black lies drove wedges into social networks. But white lies had precisely the opposite effect, tightening social bonds. Several studies have found that people are quick to forgive white lies, and even to appreciate them.

These differences show up in brain scans—and how different types of lies affect the brain can actually influence behavior down the road. A research team led by Neil Garrett at Princeton University assigned 80 people a financial task that allowed them to gain money at another person’s expense if they kept on lying.

“We found that people started with small lies, but slowly, over the course of the experiment, lied more and more,” they write. When they scanned the brains of participants, they found that activity lessened (mainly in the amygdala) with each new lie.

Not everyone lied or lied to their own advantage. One variation in the experiment allowed participants to lie so that another participant would gain more money—and the behavior and the brain scans of those people looked very different. Dishonesty for the benefit of others did not escalate in the same way selfish lies did; while people did lie for others, the lies did not get bigger or more frequent, as with black lies. And it did not trigger the same pattern of activity in the amygdala, which previous research has found lights up when we contemplate immoral acts. (Their methods are described more fully in the video below.)

The upshot of all this research? Not all lies are the same, a fact we seem to recognize deep in our minds and bodies. We may indeed teach children to lie, both implicitly with our behavior and explicitly with our words; but some of those lies help to bind our families and friends together and to create feelings of trust. Other kinds of lies destroy those bonds.

This all might seem overly complex, more so than the simple prescription to not tell a lie. The trouble with do-not-lie prohibitions is that kids can plainly see lying is ubiquitous, and as they grow, they discover that not all lies have the same motivation or impact. How are we supposed to understand these nuances, and communicate them to our children?

In fact, the argument for prosocial lies is the same one against black lies: other people’s feelings matter—and empathy and kindness should be our guide.