Recently, Google announced that its voice-activated program, Google Assistant, will be offering a new feature called “Tell Me Something Good.” Users can now give that command and receive an earful of positive news stories. 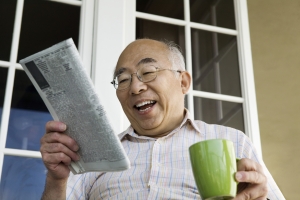 Google isn’t the only outlet offering an alternative to the gloom-and-doom news that we face every day. The New York Times has a page online called “Fixes,” which focuses on what people are doing to combat social ills, in the U.S. and around the world. The Dutch online newspaper de Correspondent aims to inform and inspire simultaneously, as does a section of the Montgomery Advertiser of Alabama.

As media researcher Karen McIntyre of Virginia Commonwealth University explains, these are all part of a news movement called constructive journalism. It involves “creating stories that are more productive, more forward-looking, more solution-focused,” she says.

That means that disturbing news stories—of polluted city waters, sexual violence, or police killings, for example—are infused with more hopeful news about what’s being done to prevent these issues in the future. Rather than causing us stress and anxiety, this increasingly popular style of journalism has the potential to help us stay informed, engaged, and optimistic.

Traditionally, news organizations tend to follow the old edict, “If it bleeds, it leads.” People are naturally attracted to negative news, in part because our brains are primed to scan the environment for danger and remember threats later, as a way of promoting survival. But being exposed to fear-inducing stimuli over and over again—with unsettling images streaming in from across the globe thanks to modern technology—can make us feel helpless, which is not good for our personal well-being or for society as a whole.

“When people feel depressed and hopeless, they don’t want to engage with the news,” says McIntyre.

In fact, a recent survey from the Harvard School of Public Health, the Robert Wood Johnson Foundation, and NPR found that reading, watching, or listening to negative news is one of the leading causes of stress among Americans. Research suggests that people who consume negative news regularly also tend to have less trust in political leaders, lower evaluations of other people and communities, and more psychological problems.

Negative news programs “can exacerbate a range of personal concerns that are not specifically relevant to the content of the program,” the researchers behind one study wrote. In other words, the upset from daily news can leak into other parts of people’s lives.

So, how does constructive journalism offer something different? First, it is distinct from “feel-good news,” like a fireman rescuing a cat or a man offering free hugs to people on the street—stories that inspire positive emotion but don’t necessarily provide in-depth news coverage of important issues. Those warm and fuzzy stories have their benefits, too; but constructive journalism offers a more complete, yet compelling, version of the news, says McIntyre. In a paper published in Journalism Practice, she and Danish journalist Cathrine Gyldensted explain that constructive journalism involves several components. In addition to focusing on solutions, it includes reporting on the historical and social contexts of specific news incidents, using reliable data to look at longer-term trends, and avoiding interview tactics that create drama without increasing understanding.

Besides improving our health and longevity, feeling more positive emotions could lead us to widen our lens of attention and inquiry—which is good for our psychological health and our relationships. And it could keep us from turning off to what’s happening in the world.

“If we incorporate some of this constructive news into our regular media diet, we can mitigate some of the effects of negative news,” says McIntyre.

The future of good news

Journalists and readers both seem to respond well to constructive journalism, according to surveys done by McIntyre and colleagues at the University of Oregon. But newspapers thrive on eyes on the page, and editors may be less interested in constructive journalism if they aren’t convinced it will engage their readers.

While McIntyre acknowledges those concerns, research has shown the opposite to be true.

For example, in one study that compared how people responded to stories with shock value versus stories focused on solutions, people were more willing to read additional stories on a particular issue when they’d read the solutions piece. And another study found that participants who read an online solutions-focused story on poverty spent more time on the page than those reading a similar story without a solutions focus.

“As journalists, we want to engage people with what we’re doing,” she says. “So, it doesn’t make sense to report the news like we are, where we’re just highlighting the conflicts and the negativity.”

There is much we don’t know yet about how this kind of journalism impacts behavior. The research is relatively young, though at least one of McIntyre’s studies showed an interesting result: People who read inspiring news stories were more willing afterwards to sign up for generous actions related to the story, such as signing a petition or donating money to support a cause from the story. This mirrors other studies that have found that people experiencing the uplifting feeling of moral elevation—which inspiring, solutions-oriented news stories could potentially engender—act more altruistically.

Even though the jury is still out on whether these new models of journalism can increase kindness in the world, McIntyre is encouraged by their success to date. There’s a hunger for this type of news, she argues, which doesn’t replace negative news but augments it.

“Journalists will always have to report on inherently negative issues,” she says. “But reporting in a constructive way would hopefully help people have a more realistic picture of the world.”