I don’t know about you, but no matter how many times I watch It’s a Wonderful Life, I am moved to tears. Something about that moment when George Bailey, played by Jimmy Stewart, is rescued from financial and emotional ruin by the generosity of his friends gets to me, making me feel deeply moved and hopeful about our capacity for human goodness.

Researchers have a name for that high we get from witnessing human goodness: “moral elevation.” And it has been shown to have many positive benefits. Past studies have found that moral elevation inspires optimism, and makes people want to be a better person and to act altruistically toward others.

Now a new study in Biological Psychology sheds some light on what’s going on in your body and brain during elevation, and why it has a distinct role to play in our human interactions.

In this study, 104 college students watched a couple of videos depicting either heroic, compassionate acts or just amusing situations, while researchers took measurements of their heart rate and medial prefrontal cortex activity. Activity in the medial prefrontal cortex is associated with higher-level cognitive process, such as empathy and “theory of mind”—our ability to predict social behavior—and is thought to be involved in experiences of moral elevation.

The researchers also measured respiratory sinus arrhythmia, an indicator of activity in the parasympathetic nervous system or PNS (our calming, self-soothing system), while heart rate indicates activity in the sympathetic nervous system or SNS (our arousal, “fight or flight” system). Because PNS activity is associated with warm feelings towards others and bonding behavior, the researchers expected activation in the PNS during moral elevation. Their results showed a different pattern: During peak emotional points in the videos, participants who watched the elevation-inspiring videos experienced dual activation—increases in both the PNS and the SNS—while those watching the merely amusing videos did not experience either.

This dual activation during elevation surprised Sarina Saturn, a researcher at the Oregon State University and one of the authors in the study. “This is a really uncommon pattern, where you see both of these systems recruited for one emotion,” says Saturn, a former Hornaday Postdoctoral Fellow of the Greater Good Science Center.

After looking into the literature further, she says, the findings began to make sense. Dual activation of the PNS and SNS occurs in situations that involve attending to others in a prosocial way while also needing to stay alert and aroused, such as during parenting and sexual activity. Moral elevation must involve a similar pattern, which makes some sense: To see a compassionate act, we must witness suffering, and that’s stressful. However, once we see the suffering alleviated through an altruistic act, it calms our heart (through the PNS), allowing us to get past the stress and give us that pleasant, warm glow feeling. This feeling is probably what calms our hearts enough to give us the motivation to “pay it forward” by acting altruistically in the future.

“It’s kind of cool to see that what’s happening in your body is an impetus to prosociality and inspires people to give and be kind,” says Saturn. “I think we’ve known that anecdotally; but now it’s great to see what’s actually happening in the body and the brain.”

Saturn’s team was surprised by study results for prefrontal cortex activity, too: activity levels varied significantly from one elevation scenario to another. This could be explained by the fact that the two elevation scenarios were a bit different—one involved coming to the aid of a physically injured person and one didn’t. In this case, the scenario involving physical injury is what caused the prefrontal cortex to light up, suggesting that the cortex may only selectively play a role in elevation.

“Previous research has shown that when you see someone in pain, that part of the brain lights up—so that may explain it,” says Saturn. “There needs to be more work to see when the prefrontal cortex goes off and online in moral elevation.”

What does this all mean?

It appears that moral elevation inspires altruism because of a mixture of arousal and the desire to protect others. Saturn believes that the hormone oxytocin—the “tend and befriend” hormone—is probably responsible for that, and that it may explain the strong, visceral responses people feel when morally elevated. In her next experiment, she hopes to study oxytocin release during elevation in new mothers—a population where it’s easier (and cheaper) to study it. 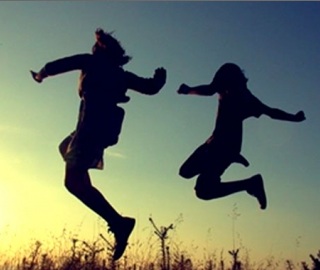 Though she and other researchers are learning more about this complex emotion, there are still many unanswered questions. Saturn wonders if future research will show that there are individual differences that account for varying responses to moral elevation. However, her own research seems to be showing the opposite—that moral elevation has a positive effect on people regardless of background, a finding that gives her hope.

“The good news was that we weren’t able to find a lot of individual differences [in our participants] based on life experiences or oxytocin receptor genotypes,” says Saturn. “So in a way I find that heartening, because it seems like it’s accessible to everyone. No matter where we are emotionally, it can uplift all of us.”

So is my annual watching of It’s a Wonderful Life a good thing? Saturn thinks so.

“I think we have a tendency to absorb what we’re witnessing and that it has an impact on our body and brain,” she says. “We’ve found that just showing an inspiring video of people being kind is enough to cause these dramatic events taking place in the body and to allow you to want to pay it forward and be prosocial in turn.”