Deadpool is the highest-grossing film in the United States so far this year—and one of the most controversial. Though the film has scored points with critics and audiences for its irreverent take on the superhero genre, its extreme gore has raised some familiar questions and objections about the role of violence in films.

But look at the highest-grossing film of 2016 internationally, and you’ll find a different type of movie: Zootopia, a family-friendly animated film that has been praised for its positive messages about the harm of stereotypes and prejudice.

How does consuming these different types of films impact us as individuals and as a society? 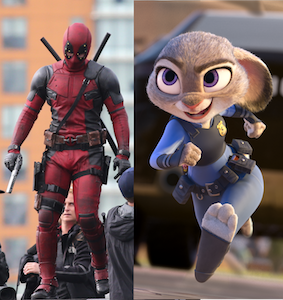 For a long time, media researchers focused almost entirely on the harmful effects of media, including the effects of media violence on aggression, the media’s role in increasing racial and gender stereotypes, and its potential to shape people’s perception of the world as a dangerous place. Indeed, since the dawn of talking movies in the 1930s, debates have raged about the potential anti-social effects of media.

However, more recently, scholarship in media psychology is starting to look at the flip side: the positive effects media can have when it’s more uplifting and inspiring. In the last few years, studies have illustrated how, just as some films, TV shows, and other media can foster anti-social behavior, media with positive images and messages can make us want to become better people and help others—to become more “prosocial,” as we researchers put it. I’ve conducted several of these studies myself, and I think the implications of this research are very exciting: Rather than simply seeing media as a negative influence to rein in, we’re beginning to understand its potential to spread goodness on a wide scale.

For example, a 2012 study by one of the seminal scholars in the field, Mary Beth Oliver of Penn State University, identified the power of films that elicit “elevation,” the warm, uplifting feeling we get when we watch someone perform deeply moral acts, such as acts of gratitude, generosity, or loyalty. In this study, Oliver and her colleagues asked 483 students to recall either a particularly meaningful or a particularly pleasurable movie they watched recently and to indicate the degree to which they felt joyful or elevated from watching it. When the researchers analyzed the content of these movies, they found that, sure enough, the meaningful movies depicted altruistic values, such as social justice and care for the weak, significantly more often than the pleasurable movies did.

They also found that the meaningful movies elicited greater feelings of elevation among respondents, which was expressed in a distinct set of emotional and physical sensations: feeling happy and sad at the same time, a lump in one’s throat, tearing up, a rising or opening of the chest, and chills.

What’s more, these feelings of elevation, in turn, were associated with a greater motivation to become a better person and do good things for others; the pleasurable movies, by contrast, motivated people to enjoy themselves and seek popularity.

Research also suggests that movies can influence not only our desire to do good but also the way we perceive the world as a whole. This research builds on earlier findings that the amount of TV people watch correlates with the degree to which they will see the world as a dangerous place, also known as “mean-world syndrome.” Research on inspiring media, by contrast, suggests that exposure to elevating media may have the potential to shift our perception of the world toward a “kind-world syndrome.”

For example, a 2011 study led by Karl Aquino of the University of British Columbia found that people who experienced elevation from reading a story about uncommon goodness became more likely to believe that there is good in the world. The more people experienced elevation, the more they perceived the world to be full of generosity and kindness. And research suggests there might be concrete benefits to this mental shift: Studies indicate that holding a cynical worldview—to only expect the worst of people—is actually bad for your health; however, seeing humanity’s positive potential can make us feel good (we experience positive emotions), which, in turn, can lead to an upward spiral of well-being.

Research that my colleagues and I have conducted points to social benefits of meaningful films as well. We asked 266 students to identify films that are meaningful to them; their responses generated a long list of movies, with the most popular ones being Remember the Titans, Forrest Gump, and Eternal Sunshine of the Spotless Mind.

We found that these films are more likely than pleasurable films to depict values of love, kindness, and connectedness, and to elicit elevation. In addition, experiencing elevation from such movies made the participants feel more connected to dear friends and family, as well as to the transcendent, spiritual aspects of life—which, in turn, inspired a host of prosocial motivations. Specifically, watching a movie such as A Walk To Remember or The Blindside made them feel a general sense of compassionate love for people, made them want to help people less fortunate than themselves, and generally made them want to be kind and good to fellow human beings, even strangers.

Our findings highlight that elevation not only makes us feel more connected toward people we know but also makes us feel compassionate toward people we don’t—even to the point that we’re motivated to make sacrifices for strangers. The study suggests that the elevation we get from films can help us transcend our egocentric bias and forge more compassionate connections to others.

Of course, making these positive changes stick is not something that happens overnight. Nor is it enough to see portrayals of moral beauty, kindness, and generosity only every once in a while. For positive media to have strong, lasting effects on us individually or collectively, I believe we need to consume it consistently, over time, just as eating right only once a week does not make us healthier.

But it is encouraging to see that these effects are possible, and that our media consumption patterns can be a force for good in the world, not just a way to make media companies rich. The research on positive media is still evolving (and I will be covering more of it in future Greater Good articles). But so far, it suggests that when we select inspiring content on TV, in films, or through social media, we’re not just making ourselves feel good in the moment. We’re nurturing our instincts for compassion and kindness.