In 2005, Hurricane Katrina struck the Gulf Coast, killing more than a thousand people and leaving tens of thousands homeless. 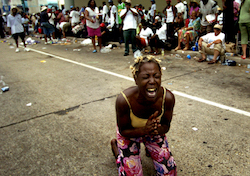 A woman begs for help in the wake of Hurricane Katrina © Ted Jackson, New Orleans Times-Picayune

That was terrible. But news media may have turned this natural disaster into a disaster for American race relations by repeatedly broadcasting images of black people who were often described as “looting” in the catastrophic wake of the storm. According to a study by James Johnson and colleagues, these types of images may lead white people to endorse harsh treatment of black evacuees (by, for example, not allowing them to seek refuge in another parish). Participants were not any less likely to help white evacuees, suggesting that racial stereotypes of blacks as criminals may have played a role.

Other minority groups—“out-groups” in relation to the majority—are portrayed negatively in media as well. Research shows that Latinos are often depicted as low status, criminal, and as sexual objects, while East Asians and Native American characters are rarely seen in the media. When they are, East Asian characters are commonly depicted as devious villains and Native American characters tend to be depicted as animalistic and savage. Middle Easterners are often portrayed as terrorists in both news and entertainment media. These stereotypic depictions can lead us to feel and behave more negatively toward these groups.

Yes, media have historically shown minority groups in a negative light, and these portrayals can exacerbate prejudice and discriminatory behaviors. But sometimes media are our only way of connecting with minority groups at all. Indeed, media may be the only contact some people have with minority groups, especially those living in homogenous communities.

Here are steps we can all take to limit the negative impact of stereotypes in the media—and maximize the positive benefits media may have on our attitudes toward out-groups.

When media impact is positive

In a study we conducted at the University of Toronto, people reported on how much they saw different social groups (like Latin Americans, the elderly, and gays and lesbians) in the media each day for 10 days. We also asked them report on all the direct social interactions they had with these groups each day, and their attitudes toward them.

We found that media contact consistently predicted more positive attitudes toward social out-groups. Importantly, seeing groups in the media was a stronger and more reliable predictor of positive intergroup attitudes than directly interacting with these groups.

This is likely because people were not having direct social interactions with many different out-group members very often, but they were frequently seeing a wide range of out-groups in the media. Even in Toronto, one of the most diverse cities in the world, people report few direct social interactions with out-group members. This demonstrates just how important media is for providing opportunities for cross-group contact.

Our findings echo the results of other experiments. In a series of studies, Edward Schippa and colleagues found that watching media interactions with gay and transgender characters were related to more positive attitudes toward gay men and transgender people in general. They call this dynamic the parasocial contact hypothesis, which states that we can have one-sided interactions with media characters, perceiving them as real people and feeling like we could know them in real life. When we have these interactions with out-group media characters, we may feel better about the out-group as a whole.

Indeed, studies have found that when people consume media that include positive interactions between in-group and out-group characters, they seem to feel more positively toward those groups, and they show more interest in interacting with members of those groups.

How to minimize the impact of negative stereotypes 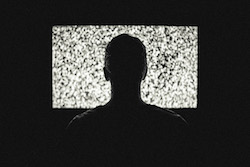 It is clear that seeing groups presented in a positive way is important for improving intergroup attitudes—and, clearly, if journalists and media-makers want to have a positive impact on society, they should think carefully about how they portray minorities.

However, if we as individuals are not able to avoid seeing negative depictions of minority groups, then it’s important to find ways to buffer ourselves—and our children—against their effects.

The first step is to recognize negative stereotypes in the media when you see them, label them as stereotypes, and resist their influence on how you respond to the group. There is some evidence that actively challenging stereotypic responses when they occur is an important tool in combating our explicit and implicit prejudices.

Moreover, you can deliberately expose yourself to more diverse representations of other groups.

Studies have found that people who have had more social interaction with minority group members are less likely to be affected by negative media depictions of these groups. This may be explained by the fact that they have more varied representations of what members of this groups are like, and therefore do not allow a single, negative representation to shape how they treat people from that group. Even if you are not able to do this by directly interacting with minority group members, you can consume media with counter-stereotypical depictions of these groups. Doing this repeatedly over time may reduce the extent to which you rely on stereotypes to shape your attitudes and behavior toward these groups, similar to the way direct social interaction does.

We can use these same strategies with our children in order to minimize the negative impact of stereotypes. First, we need to explain to our children what stereotypes are and why they are harmful. When you consume media with your child, you can point out stereotypes when you see them and explain to your child why that stereotype is not representative of the group. You should also encourage your child to consume media with counter-stereotypic examples of out-group members and positive interactions between members of diverse groups.

While some news coverage during and after Hurricane Katrina activated and reinforced stereotypes, much of it had the opposite effect, raising awareness about racial inequality. For example, several articles discussed how race influenced the response of the US government and the media to this horrible tragedy. This hopefully created greater awareness of racial inequality and issues facing the black community for those who read these articles.

Although stereotypes are still broadcast to us through media, we can resist their influence when we acknowledge that they exist and that they are a problem. Moreover, we can use media as a tool to come into contact with different social groups that we may otherwise not have contact with and to learn about their experiences. In doing so, we may reduce our prejudices and foster more egalitarian attitudes in ourselves and our children.