In February 2017, I was a fairly apolitical college freshman and an aspiring pre-med student at UC Berkeley. That month, I was walking back from my freshman seminar when hundreds of people began both peacefully and violently protesting Milo Yiannopolous’s speech at UC Berkeley. 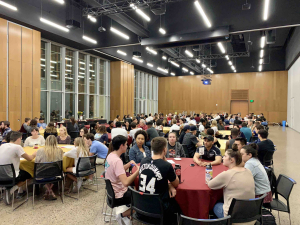 I remember being deeply struck by the pessimism, anger, and apathy that gripped my fellow UC Berkeley students. Little did I know that the Milo protests would not only change my campus, but they would be the start of my political awakening.

Following the protests, a few friends and I organized a discussion event to help students grapple with and talk to each other about what had happened on campus. This discussion space was open to all students, and it featured structured, moderated, student-led dialogues.

We quickly realized how strong the student demand was at UC Berkeley to have a consistent moderated space for bridging differences and navigating disagreements. As a result, we turned the space into a student club called BridgeBerkeley, which held weekly discussions open to all students.

At the time, I assumed that this widespread demand for bridge-building was just a UC Berkeley fad. And yet, over the next three years, BridgeBerkeley transformed into BridgeUSA with chapters on 50 college campuses and 26 high schools. Since then, BridgeUSA has become the largest and fastest-growing student movement changing how we talk politics and improving the state of discourse in our country.

Of course, my organization is just one piece of a bigger puzzle that many people are trying to put together. “Bridge-building” refers to a growing field of academics, philanthropists, and practitioners who focus on fostering empathy and understanding between individuals of diverse backgrounds, and equipping people with skills to handle disagreement. Simply put, bridge-building helps people talk to each other and inculcates the skills needed to navigate a democracy defined by ideological and demographic diversity.

There are few institutions in American society as well-positioned as higher education to build bridges across lines of difference and create spaces for empathy, dialogue, and intellectual curiosity. College campuses and universities are some of the few remaining physical places where Americans of different income, ethnic, and ideological backgrounds have the opportunity to interact and engage. More importantly, the leaders of tomorrow are on today’s college campuses; we have a unique opportunity to invest in the future of our democracy by having universities prioritize deliberation, freedom of thought, and reasoned conversation at a moment of deep division and uncertainty.

As I lead BridgeUSA, I have had the opportunity to travel to hundreds of college campuses, meet with thousands of students, and listen to the concerns of faculty and administrators from across the political spectrum. The one throughline that has animated almost every one of my interactions within higher education is that people want to see bridge-building in their communities and most are fearful of being able to have conversations across political differences. My anecdotal experience not only confirms this, but demonstrates the urgency with which university administrators need to prioritize bridge-building in their strategy for building an academic environment that is inclusive, deliberative, and open-minded.

We often forget that the core unity of democracy is people—a healthy, informed, and empathic citizenry is vital to a society built on the need to find consensus. While institutions matter, democracy will falter if the citizenry continues to perniciously polarize and divide. If we as people distrust each other, feel alienated in our communities, and lack understanding of opposing perspectives, then our civic fabric will continue to fray and our institutions will continue to falter. And if young people adopt the zero-sum nature of today’s discourse, then the future of our democracy is at risk. By practicing bridge-building and democratic deliberation as individuals, we will strengthen our civic muscles and create the conditions possible for people to be more accepting, inclusive, and understanding.

Specifically, there are three unique benefits to us as people if we add the bridging mindset to our repertoire of civic and cultural engagement on college campuses.

First, having conversations with people of different and opposing perspectives helps us be more curious and empathic. An analysis of lots of research found that “intergroup contact typically reduces intergroup prejudice.” By being exposed to new perspectives and different people, we build our muscle of understanding. We discover shared values, have the opportunity to empathize with different lived experiences, and better understand why people believe what they believe. Importantly, this process enables us to foster more trust. In a world in which engagement with different perspectives is increasingly limited to social media, we must create opportunities for people to have bridging conversations in-person. Otherwise, our perceptions of different political tribes, identities, and groups will be built on fear and division as opposed to curiosity and empathy.

In addition to inculcating curiosity and empathy, talking to those we disagree with helps us be better advocates for our own beliefs. Engaging in dialogue is not surrendering our beliefs. In fact, the act of building bridges with different people enables us to refine our arguments and strengthen our opinions. Spending our time in our echo chambers may feel safe. But echo chambers also engender groupthink and blunt our critical thinking.

For example, at our Berkeley chapter, we hosted a discussion event about homelessness where students and local community members, including folks who had experienced homelessness, were invited. Through a structured and moderated dialogue between opposing perspectives, participants were able to arrive at unique policy solutions after honing their positions based upon what the opposition had to say. This process of bridge-building helped students find their voice, refine it, and become more effective advocates for their own positions.

There is an argument to be made that bridge-building can sometimes result in the unintended “platforming” of hate. While this is a valid concern for many, the answer lies in how these conversations are structured. It is very important to emphasize that bridge-building is not an attempt to create spaces that platform hate and violence. Instead, bridge-building, when done right, features skilled moderators and student leaders who understand their local communities and want to create an atmosphere that is welcoming and inclusive. Every BridgeUSA discussion begins with outlining our norms of discussion. These norms are powerful because they set the tone for a conversation and incentivize participants to focus on finding understanding, as opposed to winning an argument.

Furthermore, we are more likely to inculcate intellectual humility by engaging in moderated conversations with different perspectives. And, at this moment when loud voices across the political spectrum stand steadfast in their ideological positions, we certainly need some humility. It should not be a surprise that someone with a differing perspective may have something valuable to offer—this should not have to be said, but that is the state of our discourse. Having perspective and exercising humility is an essential cornerstone to our deliberative democracy. If everyone shows up to the town square with complete confidence in their ideas, there is little room to find shared consensus that pushes society closer toward a more perfect union.

Therefore, the argument for bridge-building is not just at the individual level. It also exists at the societal level. One of the most frequent questions I get asked by young people on campuses and high schools is “how does bridge-building lead to change?” In other words, asking people to engage in conversations across lines of difference at a moment when a lot is at stake seems to be fruitless at best and “kumbaya” at worst.

Fortunately, the answer to this question is quite simple—and it provides the third benefit of bridge-building: It builds support for inclusive social movements. Bridge-building has been the backbone of every major social movement in the 20th century from Gandhi in 1945 to Martin Luther King Jr. in the 1960s to Mandela in the 1990s. These social movements succeeded because they were able to reach beyond the choir and turn critics into converts. As King famously said, “We must learn to live together as brothers or perish together as fools.”

The project of social transformation necessitates an understanding that we must lift up all boats and bring as many people along as possible. It requires a multi-stakeholder approach where we can develop shared thinking and new practices that are unimaginable in a gridlocked political system. Importantly, having conversations with people different from ourselves is core to crafting coalitions that span ideological, racial, income, and gender divides. Bridge-building is not just a squishy excuse for a conversation; it is a theory of change that will elevate American democracy. Bridging helps build trust, and trust is necessary to finding the common cause to take tangible action.

Bridge-building is also essential for continued societal cohesion in the United States. As the United States approaches the “majority-minority” milestone in 2045, American democracy will become one of the most racially diverse democracies in the history of humanity. That presents both a significant opportunity, as well as a challenge.

Our current political moment is dominated by conflict entrepreneurs who play on our fears and find cleavages to further divide us into different tribes. We must develop channels of communication and facilitate moderated conversations to reduce animosity toward different groups. Studies on perspective taking and dialogue have shown that bridge-building can reduce “stereotyping” and “in-group favoritism.” In a society as diverse as the United States, unlocking the power and impact of diversity will require bridge-building. Having curiosity, empathy, and understanding for people different from ourselves is the crucial first step toward inclusion for all.

More importantly, the viability of American society rests on the notion that we treat each other with empathy and learn to live with difference. The goal is not to stamp out disagreement, but to help folks to disagree. Diversity does not automatically guarantee progress; it requires all of us to build bridges between each other so that we can create a better collective society.

Beyond the critique that bridge-building fails to meet the moment, there is also a real concern that engaging in conversations across lines of difference requires compromise or a suppression of one’s own beliefs. This concern is especially relevant for folks who feel marginalized and have a real stake in our policy debates. If the project of bridge-building were centered around forced compromise, I would strongly agree with this sentiment.

However, it is important to emphasize that the goal of bridge-building is not compromise. Instead, the goal of inculcating empathy and facilitating constructive dialogue is to foster understanding between different perspectives. Understanding and forced compromise are two separate ends; in fact, we believe disagreement provides the fuel for democracy to move forward. Passionate argument is essential to helping us solve the many problems that society faces. However, we must be able to disagree while being constructive. Today’s polarization prevents constructive disagreement and is leading us to a political arms race where no one wins.

Ultimately, bridge-building is an investment in humanity’s core competency: our ability to communicate. Evolutionary biology tells us that our ability as a species to communicate and talk to each other is fundamental to the advancement of humanity. Our competitive advantage as people is that we can communicate. If we lose the ability to talk across lines of difference, listen to each other, and empathize with new perspectives, everything breaks down, from education to community to politics.