When I was little, I sat in the cool shade of the lilacs watching my brother lay a plastic bag full of ladybugs in the yard under the hot August sun. There it was, full of moisture, slowly getting larger and larger until we couldn’t help but cover our ears to protect them from the inevitable POP! We laughed as we later reenacted the same POP! for our family. 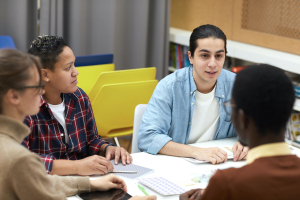 At the time, it didn’t occur to either of us to question what happened to the ladybugs.

Since the 2016 election, I have many times felt like this anticipatory explosion was coming in my classrooms. During discussions that touched on politics, I found myself waiting for which student was going to be scared, offended, or threatened by a rhetorical question, another student’s ideas, assignments, due dates: what used to be innocuous facets of the classroom.

Instead of looking forward to the innocent surprise POP! we felt as children, a feeling of sickness pushed through my stomach before class sessions. Instead of feeling the raw joy I expected—wanted—to feel, I worried about navigating issues, keeping order in the classroom, distracting students, and avoiding interactions.

As an English and humanities professor at Mid Michigan College, my journey began with an idea: What if I changed the focus of my classes? Could I alter current courses to help students learn compassion? I began developing a “Studies in Compassion” course. While researching, I ran across UC Berkeley’s Greater Good Science Center again and again.

While on their website, I found “Bridging Differences,” a free online course. I took it hoping to learn how to help myself, my colleagues, and our students challenge our own views, actively listen, compassionately speak, recognize shared identities and values, identify common goals, make intergroup connections, and apply these concepts to the rest of our lives—all skills the class promoted.

During the course, I joined a “community of practice” cohort with other higher education professionals, and I began applying what I learned in my freshman composition course. It made a difference.

Don’t get me wrong. My classes were never violent war zones, I had plenty of engaged students, and I think I already taught well. This isn’t really a rags-to-riches tale or abject-failure-to-definitive-success story where “If only YOU had Bridging Differences, you too could win big!” will be spouted in the next line.

My classes were doable before Bridging Differences, but now they are safer and more engaging. This has really been a time for me to strategize: pedagogical practices that incorporate the changing political and campus climates, ways for the classroom to adapt, and methods to be a safer facilitator for my students.

What did I learn from the course and from my efforts to put these skills to work in my community college classroom? Here’s a rundown of some of the biggest lessons.

1. High-impact lessons don’t have to be difficult

Once students added a list to each of the four rooms, they were tasked with finding other students who shared parts of their house. During this time, students found strangers who shared similar identities and values. This feeling of values connection began the steps of nurturing a community of belonging.

We then discussed a Bridging Differences lesson on “superordinate groups”—that is, umbrellas for shared identities—and used some of their exercises to bring students together. This scaffolded into a discussion about different superordinate groups around us, focusing on questions like “What might we all have in common?,” “Do we share a common goal?,” and “What does it mean to share a common goal?” This then wrapped into a project synthesizing academic sources that problematized concepts of superordinate groups. This assignment had the same classroom outcomes as previous semesters, just with a different focus.

I had similar assignments before Bridging Differences. The key, for me, has been to learn how to shift my mindset. As a teacher, I always told students my classes were safe havens for opinions—but that is very different from them building the safety themselves. I learned to set a safe stage for open discussion at the beginning of the semester, mindfully discuss and practice active listening, use compassionate rhetoric, and establish a concrete understanding of what compassion they are expected to both give and receive.

One day, when we were talking about the faulty image of superheroes, one of the students entered the conversation. He was Michigan National Guard E-4 Specialist (now deployed) A.J. Boyle. He explained how, while deployed during the Insurrection Act, his job was to find and destroy the enemy. Sometimes, this meant blowing up buildings knowing that civilians—innocent families even—might be harmed, too.

I looked at the other faces in the class. Every single human seemed engaged in that moment with a new perspective, that this guy the class adored was considered a villain to some people. This created a meaningful space for students to reconsider the concepts of “good” and “bad.” A person who killed innocent people was “bad,” but A.J.—they all knew—was “good.” How could he be both?

When I asked A.J. later why he felt comfortable sharing this with classmates, he admitted school hadn’t been easy for him. He had come from Flint, Michigan, where all sorts of issues made learning difficult.

“This class was very open-discussion–based so it was easy to add to the conversation for me,” he told me. The foundation had been laid at the beginning of the semester with a Bridging Differences activity. “The house activity brought to light a lot of views we all had,” said A.J. “It almost forced us to let in certain people we would have never thought of.” The feeling of shared identities created space for A.J., and other students, to openly share ideas without fear. This created space for compassionate and understanding engagement.

One of the elemental concepts of Bridging Differences is to establish that the goal is not to “win” or even agree; the goal is to listen to find humanness in each other. This worked for Siera Feldpausch, a student athlete, who said the open discussion made her feel like she and the other students were respected no matter what they said. “We could voice our own opinion, others could continue the conversation with their own opinions, and we were open to talk.”

She discussed the feeling of being silenced in classes before. “We weren’t shut down here. We could agree, or disagree, and nobody was angry.” Bridging Differences helped other students, too. Amber Beatty, mom of three daughters (15, six, and three), was unsure about college when she walked into our class. She had struggled with English in the past. Her husband worked on the road, and school felt daunting on top of her “single” mom duties. For the last month of the semester, she even had to travel five hours daily to be with her father, who was losing a battle to an aggressive form of cancer.

Exercises from Bridging Differences really resonated with Amber, especially when life got difficult. “I think, over time, parenting, being a wife, and giving everything to everyone else, I have forgotten some of the most important values in my life, what I hold close to my heart, what matters to me, and what doesn’t.”

Amber told me that the interaction of the activity helped build a sense of belonging that created space for civil disagreements. “We were always heard, even if another student disagreed.” She continued:

There was no animosity in conversation, even in disagreement. There was a lot of room for listening to other students, receiving new ideas, and learning about other people, their feelings, and backgrounds, which, overall, helped me become a better person even. The class made us feel important, that we were not just students, that our opinions, our feelings, and what made us us mattered.

Amber said the Bridging Differences activities helped her succeed because she knew she belonged. Her dad solidified her purpose before he passed, saying, “I know you’re going to be the best nurse there is; there is no doubt in my mind about that.” She said our class not only created a space for her but a feeling of “belonging in college overall,” pushing her forward to graduate, no matter what.

Lately, I’ve been thinking about that plastic bag swelling in the sun. What a strange thing that, during all that time we waited, we didn’t think to pick the bag up, open it, and release the pressure. It seems like a simple solution, doesn’t it?

In her 2018 book All About Love: New Visions, the late bell hooks builds an argument for creating spaces like this. “Enjoying the benefits of living and loving in community empowers us to meet strangers without fear and extend to them the gift of openness and recognition,” she writes. “Just by speaking to a stranger, acknowledging their presence on the planet, we make a connection.”

That is what it’s about. Bridging Differences turns strangers into humans and opens conversations where, even if we don’t agree, we actually listen to and understand each other. Our students, our campuses, and our communities need to feel more connected. As teachers, we have great power to open the conversations.

At the end of my first semester integrating Bridging Differences into my freshman composition lessons, lectures, discussions, and activities, I witnessed a classroom full of students who passed the course because they met or exceeded the required Degree Qualifications Proficiencies–based learning outcomes built into our department curriculum.

They also learned lessons far beyond basic writing. To accomplish this, I changed the mode of delivery, the format of discussions, the shape of the assignments, and the heart of the class but kept the curriculum consistent.

Yesterday, I met with our college president, Tim Hood, to discuss the potential of implementing Bridging Differences in different ways across our campuses. President Hood was excited about working with our community to enhance diversity, equity, and inclusion. He said, “Diversity, equity, and inclusion matters need to be a priority for us this year, and I am encouraged by what I’m learning about Bridging Differences concepts.” Instead of waiting for the POP!, I have the chance to practice ideas from Bridging Differences not only in my different courses but across our campus community, too.

The semester is starting soon, and I no longer find the dread I used to feel. Somehow, the pressure’s been released. I’m excited to start classes, challenge students, engage in meaningful dialog, and create spaces for belonging—living and loving in community—that students can carry with them throughout the semester and beyond. I have more hope and excitement than I know what to do with. This is what my students and I deserve.