When Clare Cannon read about the Greater Good Science Center’s Bridging Differences program last year, she knew she had to be a part of it. Originally from Australia, she is now a researcher and adjunct professor in Spain, at the IE University in Madrid. Her class on Globalization and Cross-Cultural Communication consisted of 60 first-year students of 35 different nationalities. With such a diversity of backgrounds, differences in perspectives and opinions were expected—and she was constantly looking for ways to encourage thoughtful dialogue. 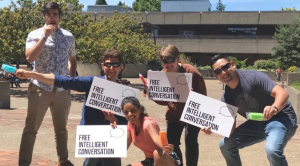 Students taking part in Free Intelligent Conversation, inviting anyone to talk about an issue with them, part of the the Civil Discourse Program at Linn-Benton Community College. © Mark Urista

Here was a program, she thought, that would provide the tools, not only to enrich her curriculum, but also to create a better learning environment. And, in fact, she was able to integrate what she learned with what she taught that same semester. With those strategies, “it was no longer a scary thing that people have different ideas,” says Cannon, who also teaches at Universidad Rey Juan Carlos, in Madrid. “It’s a great asset that we can learn to take advantage of through practicing tools of dialogue, discovering what new ideas emerge when we learn to voice our differences, to listen to and understand each other deeply, and begin to collaborate.”

Since its launch in October 2021, the initiative’s online course has attracted more than 7,000 people. Merging the latest social science research with innovative interdisciplinary practices, its curriculum provides a complete toolkit for fostering better communication with others, no matter how different they seem. Following the launch of the course, the Greater Good Science Center selected campus leaders from 50 colleges and universities to participate in a “community of practice” organized around the Bridging Differences course. Over eight months, they met monthly in 90-minute live Zoom sessions to learn more from the course instructors and other experts, dig into tricky questions raised by the material, and discuss the challenges and insights they encountered when applying it to their work and their lives.

Since then, participants have taken the techniques back to campuses around the country and even the world, so that their students and colleagues (and, really, whomever they have a conversation with) can understand and experience the value of positive discourse, too. Here, they share with us what they learned—and how that’s made a difference on their campuses.

What does it mean to bridge differences?

Bridging Differences, the initiative, started out as articles and podcast episodes on science-backed findings and techniques promoting empathy, connection, and positive dialogue. The Greater Good Science Center ultimately distilled many of the key practical lessons into a Bridging Differences Playbook, which was released in May 2020. The initiative soon built on this Playbook by bringing it to life through the course and highlighting its implications for different sectors—starting with college campuses.

“A campus is a microcosm of society,” says Scott Shigeoka, the Greater Good Science Center’s Bridging Differences fellow. “We wanted to empower faculty and staff and students to gain these skills to help them navigate challenges, come together, and deepen their understanding of each other.”

To best understand the concept of bridging, it’s important to understand what it isn’t. It’s not about trying to convince people that you’re right, says Rodolfo Mendoza-Denton, a senior fellow at the Greater Good Science Center and the course’s co-instructor. Nor is it about meeting others halfway.

Instead, it’s about genuinely wanting to understand where the other person is coming from, seeing their humanity, and being accepting of the idea that you’re not necessarily the only one who’s right. “There’s a lot more self-work than you’d expect,” says Mendoza-Denton. It can be a challenge to open yourself up to other points of view, he says, even as you staunchly believe in yours.

So often, when we hear about the enormous rifts occurring in our society, particularly with issues of race, we hear pundits point out the obvious: “We must do better,” they say. “We must have the difficult conversations.” But how? Few, if any, have provided any concrete directive.

Bridging work aims to provide answers to those hard questions. And, in fact, many of the educators who’ve participated in the communities of practice have already brought the strategies into their classrooms, even as they’re exploring these strategies themselves.

Cannon, at IE University, was one of them. Last semester, when she broke her class into small groups (as she normally would to discuss a topic—say, a new United Nations proposal), she also instructed them to really look at each other as they’re talking.

“When you stop judging and analyzing and trying to figure out what to say next—and, instead, just listen and look at a person’s face and body language—you can see the transformation when the other person feels listened to.” Likewise, she adds, those doing the listening start to realize the other person’s humanity. “You see the faces relaxing and the light in the eyes,” she says. “It’s extremely powerful.”

Jackie Justice, a professor of English/humanities at Mid Michigan College in Harrison, noticed a difference, too, when she introduced bridging activities into her class, most of whom come from the surrounding working-class area. For example, she instructed her students to draw a house and split it into four squares, filling each one with something they value. She learned this exercise through the community of practice from the organization Essential Partners, which was one of the experts involved with sharing best practices. She then asked students to find others who valued the same thing—an assignment that enabled them to connect with other students whom they wouldn’t have otherwise connected with.

As the semester progressed, and some discussions intensified, they used bridging techniques to keep the conversation going in a respectful way. “The political divide has created spaces where healthy academic disagreement has become very difficult. In my classroom, we had both silent and angry students, but the semester ended with all students sharing openly,” she says. 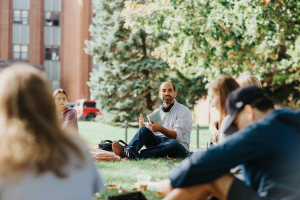 Nick Longo, global studies professor at Providence College, in Rhode Island, was particularly struck by the active listening aspects of the bridging course, and plans to incorporate it into his Dialogue, Inclusion, and Democracy Lab on campus, where learning to listen is a key concept.

What’s more, he’ll be using this and other bridging strategies in a new campus-wide initiative called Conversations for Change, which recently received a $250,000 grant from the Arthur Vining Davis Foundations. This initiative will incorporate bridging strategies into a range of courses and spaces throughout campus, and give students the tools they need to succeed in thoughtful discourse.

“We are often reactionary when a controversial issue comes up,” he explains. “This initiative is meant to promote a culture of dialogue and be proactive.”

Beyond bringing concepts of bridging to classrooms, educators are also incorporating techniques into their thinking as they work to create a more diverse and equitable learning environment.

This has been particularly true for Megan D’Errico, associate dean of science and mathematics at Sierra College in Rocklin, California. “The sciences tend not to have a focus centered on care,” she says. “It’s almost adversarial, a ‘weakest one out’ culture.”

As she is actively seeking out solutions for greater equity in STEM, she’s also found that the bridging tenets of active listening, compassion, and finding common goals have “widened her worldview.” Science is hard, she explains. It’s especially hard if you haven’t ever been in a chemistry lab in K–12. From student complaints to accommodations to hiring and managing conflicts, the techniques learned through Bridging Differences have helped her “question her assumptions,” she explains.

In addition, to have more people—faculty and students alike—become allies of diversity, equity, and inclusion (DEI) efforts, one has to consider an inconvenient truth. Not everyone buys into the concept.

“For some, it can feel elitist,” says Mark Urista, communication faculty member at Linn-Benton Community College in Albany, Oregon. “But if you want to make change, you need people who feel this way to be a part of the conversation.” And while bridging work doesn’t aim to change people’s minds, he says, “if done well, bridging can draw more people into DEI conversations—which, subsequently, can cause hearts and minds to be transformed.”

In the coming semester, Urista plans to bolster the popular student-led Civil Discourse Program. Already, he is collaborating with others spearheading the diversity, equity, and inclusion work in his school to build a more compelling, inclusive program.

How to bridge differences in everyday life

Listening is a key concept in bridging work. Here’s how to actually do it, so that conversations are positive and meaningful.

Be mindful. Every session of the educators’ community of practice event last spring began with a mindfulness practice, which gave participants a chance to center themselves. Longo found the practice particularly valuable. “They helped to get the group centered and present as we prepared for our time together in the midst of our busy lives,” he says. As you meditate, think about someone who made you feel safe and comfortable; or think about the humanity of the person who thinks differently from you. What do you both have in common?

Be attentive. As Cannon realized, when we’re thinking about what clever thing to say next as a rebuttal, we’re not really listening. To listen, look at the other person eye to eye, and focus on what they are saying. Let them know you are really listening to them.

Be curious. This is a critical skill for bridging, says Shigeoka, who came to this work due to personal experiences of feeling ostracized by others because of their identities and ideologies. Realizing how harmful exclusion is for our well-being, Shigeoka has since been working toward the goal of “ensuring everyone feels a deep sense of connection and belonging.” He says curiosity is essential to accomplish this, which includes asking questions like: What values do I share with this person, although we may have different points of view? How do I nuance my understanding of them or the issue at hand? What judgments or assumptions am I bringing into this conversation? “Being curious and asking these sorts of questions helps you truly listen, better understand others, and recognize shared humanity,” Shigeoka said.

Be humble. Your truth isn’t the only truth, and the truth can change. With humility we can be open to another’s point of view. “We should never walk into the room thinking we know it all,” says Justice.