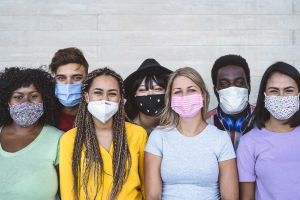 But that doesn’t mean that campus life is returning to pre-pandemic normalcy. The arrival of the Delta variant and a resurgence of COVID-19 cases is leading many universities to deploy mitigation measures like mandatory indoor masking, social distancing, and vaccine mandates.

Meanwhile, many students who are returning to campus are facing the prospect of in-person socializing and education after spending much of their time in mostly online environments, which is likely to be a jarring transition for many.

This transition is complicated by ongoing campus disputes arising from our political climate, many of which have been supercharged by the pandemic. At different universities, students on different sides of political divides have protested for and against mask mandates, for instance.

We spoke to people around America who work on bridging differences in campus environments about the challenges that universities will face as students return to school—and the ways that communities can best respond.

The first thing to know about the new school year is that the student experience will vary widely thanks to America’s polarized response to the pandemic.

“In many ways, the vaccines, masking stuff that’s playing out is like a manifestation of the political divides on campus,” says Mary Ellen Giess, vice president of strategic initiatives at Interfaith Youth Core (IFYC), which works to bridge religious divides at colleges and universities.

“It’s in some ways a new thing because of COVID, but it’s also a continuity of existing divisions that have been manifesting on campus in different ways.”

Not every college or university will be imposing the same measures to respond to the ongoing pandemic. Some more conservative states like South Carolina are limiting the ability of their colleges and universities to mandate both masks or vaccines, while the University of California system will be imposing a vaccine mandate for all staff, faculty, and students who will be on campus. Other schools are going so far as to mandate double-masking and prohibiting in-person dining services.

This means that there really isn’t any one-size-fits-all approach to what campuses look like this fall. Some students are in packed classes and in-person events, while other universities may fall back to online classes in the event of a heavy outbreak of COVID-19 cases.

Still, there is a common challenge that universities can expect to face as a generation of young people return to school.

Educators and activists worry that the past 19 months has left many feeling alienated and anxious, particularly when young people’s screen time has skyrocketed and many students were forced to use online learning.

“The fact that our only interaction’s been social media has really anonymized everyone, and as a result has desensitized people to human interaction,” says Manu Meel, the CEO of the campus bridge-building organization Bridge USA.

In Meel’s view, it’s paramount for universities to do everything they can to promote meaningful student connection. One way to build bonds between people effectively while also being mindful of the ongoing risk of COVID-19 is to organize opportunities for students to engage with each other in small groups.

“The size and scope of student engagement’s going to change,” Meel said, noting that Bridge USA has long emphasized getting students together in small groups of eight or ten people to talk to each other because it makes having personal and difficult conversations easier. Colleges have tended to focus on speakers that draw large audiences in order to catalyze campus conversation. But with the pandemic, he says, “They’re going to have to figure out how to be intimate in their engagement.”

Samuel Santos, the assistant vice chancellor and associate dean of students at UC Berkeley, highlighted the potential of these smaller groups by talking about how the school has been doing orientation.

“We have 9,000 students typically coming through for orientation,” he notes. “So, we break them into groups of under 50. And that becomes sort of an anchoring point for the entire orientation process and, we hope, for at least their first few weeks and even first semester at Cal.”

While promoting small, in-person groups may be the ideal way to rebuild student connections and relationships, that doesn’t mean that online tools are useless.

Although bridge-builders nationwide are eager to return to in-person connection with all of its associated benefits, the online capacities they developed during the pandemic can still be used when necessary. Many universities are continuing to offer an option for remote learning for students, and civil society organizations are learning that these tools can even expand their pre-pandemic capacities.

Doug Sprei organizes civil and constructive debates with the organization Braver Angels, which works to reduce political polarization in the United States. “When COVID hit, we had to pivot overnight to a Zoom virtual model because that’s what was happening with all the schools,” he says.

Braver Angels discovered that the online debates were popular. “To my great surprise, our program exploded when the COVID pandemic hit,” Sprei said. “We actually found a huge demand and a great appetite from schools all over the country, and we did a lot more work than we ever thought we would.”

The new format forced the organization to innovate. They hosted national debates and online events where audience members from as many as 20 different colleges participated.

Going forward, Sprei and Braver Angels will host in-person debates when conditions allow it, but they are also retaining their capacity to continue to do Zoom events when in-person events are disallowed.

Today, they’re embracing “a hybrid model,” planning a series of both in-person and Zoom debates going forward. “Either way, we can flex, and we’re staying true to our mission of growing a program that will build a movement of civil discourse on college campuses,” Sprei says. “That’s the bottom line.”

IFYC found similar success with its online tools, pointing to their Bridging the Gap program, which promotes honest conversations between people from different political persuasions.

“They adapted what was an in-person class in pre-COVID times to be an entirely virtual course—similarly intensive, relationship-building experience, all on Zoom, and did that while expanding to more campuses,” says Giess. IFYC had thought their program needed to be “place-based”—but the pandemic opened up “possibilities for what can be a virtual program.”

Alex Lovitt, a program officer at the Kettering Foundation who works on campus polarization issues, emphasized that while the shift to online education was disruptive to higher education, many schools found it to be a workable format.

“Higher ed in some ways has been better positioned than other folks,” he says. “Everyone we work with, classes have gone online. They’ve been able to basically teach in the same ways with the same lesson plans.”

Santos highlighted how online processes can increase accessibility for some students. “Our orientation has been hybrid the last two years,” he says. Santos continues:

We’ve actually found that having a lot of our orientation or the bulk of the orientation online during the day has helped norm access for students with disabilities, students who have dependent care responsibilities, familial responsibilities, are working, couldn’t find a place, or are still working on their housing plan for Berkeley. So in some sense it’s allowed us to reach more students and be more student-friendly.

One way campus divides mirror America’s divides is the ongoing issue of vaccine hesitancy. Though America’s senior citizens are the most vaccinated people in the country, youth are among the most unvaccinated.

Some colleges are responding to hesitancy with mandates for students, staff, and faculty. Others are continuing to use incentives to encourage their campus communities to get vaccinated.

In order to engage with vaccine hesitancy, IFYC created the Faith in the Vaccine program, which enlists college students and recent college graduates as ambassadors to build trust in hesitant communities.

The organization recruited around 1,400 ambassadors at 107 campuses to start to engage with local community members about the benefits of taking the COVID-19 vaccines. IFYC’s approach relies on recruiting people who already have some level of buy-in and trust in their community.

“Our training is focused on the skills of understanding your institutional assets and trying to analyze the situation on the ground—so being able to put together a strategy and a plan that utilizes local partners and addresses local need,” Giess says.

She also noted that they train the ambassadors to engage in what’s called deep listening, which involves closely listening to your conversation partner, asking questions, and making them feel understood and valued. “[It’s] being able to genuinely understand a perspective that’s very different from your own and not encounter it with judgment but encounter it with curiosity and empathy,” Giess notes.

Part of the strength of IFYC’s program is that it’s based on the reality that human beings tend to respond better to messages from their in-groups—those that people consider themselves to be part of—than they do messaging from out-groups. The ambassadors may not have personal connections to the people they’re reaching, but it is taking place in familiar community spaces such as churches, mosques, and synagogues.

Suzanne Henderson, a professor of religion at Queens University of Charlotte in North Carolina, has been closely involved with the ambassadors program in her region. She mentioned that not only are ambassadors working in the community, but they’re also active on campus, helping instruct nursing students and others on how to approach issues like vaccine hesitancy.

“What we’re trying to do as a campus is to open conversations, rather than shut them down—to certainly avoid shaming or singling out people who are not vaccinated,” says Henderson. “But increasingly keep the vaccination conversation going.”

Above all else, it’s important for colleges and universities to clearly relay information to students and to be available to hear students’ concerns.

“We have multiple ways students can access a person—their advisor, we have GBO [Golden Bear Orientation] office hours that are drop-in virtually and in-person. We sort of just get out there and start the conversation,” Santos says. “My biggest piece of advice would be just to keep the communication flowing in as many ways as possible.”

Dan Mogulof is an assistant vice chancellor of public affairs at Berkeley. He explained that building close ties to students is key.

“I recently met with a few student leaders…and they expressed a concern that surprised me, concerned me, but also was kind of gratifying,” he says. The students were worried that if the university went back to remote learning, “it might never return to in-person learning.” Mogulof says he would hate for that to happen—and he thinks we need to work together to keep it from happening.

Proactive communication with students can help head off potential problems before they arise as well as help develop buy-in for potential policy changes. But ultimately, the best thing universities may be able to do is to empower students to lead the conversations about their own futures.

“I think really the solution has to come from the students,” says Meel. “The students are going to have to make a genuine effort at that engagement.”