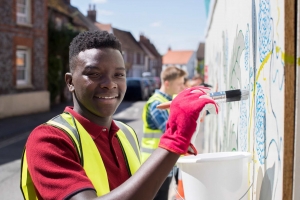 And one of the most crucial activities our teens can engage in is contributing to their social groups.

As they get older, teens can provide emotional and practical support to friends, family, and the broader community in deeper, more meaningful ways. Research suggests that kind and helpful behavior toward others actually increases from childhood through adolescence—making the stereotype of the self-absorbed teen a myth.

In fact, adolescence is a sweet spot for contributing to others. With massive changes happening in teens’ brains, their newfound physical, cognitive, and emotional capabilities combine to enable them to make contributions that have real benefits to the people around them. What’s more, opportunities to make such meaningful contributions appear to build exactly the skills they need to flourish as adults.

Both our teens and their communities will be better off if we help them find ways to make a difference.

How the teen brain is primed to contribute

What are “meaningful” contributions? When we talk about contributing, it’s not just about being kind or volunteering here and there (although both are important). It refers to “contributions of consequence”—actions that have substantial benefits to others that help to reach a shared goal. This type of contributing involves not simply taking a single action but playing an important role within a group—whether it’s a family, school, or community.

Adolescents, it turns out, are remarkably well adapted to contribute to others.

Adolescence is a time of massive restructuring in the brain, creating a faster, more efficient system. Neuroimaging studies show that the neural networks that change most significantly during adolescence are the same networks activated by contributing to others.

For example, the “social brain”—the intricate network of areas in the brain that activate in social interactions—matures rapidly during the adolescent years. This development increases young people’s ability to understand the feelings and perspectives of other people. Adolescents’ advancing cognitive maturity allows them to consider the complex dynamics of other people’s competing perspectives and needs to determine whom and how to help.

Another area changing during these years is the “reward system,” which increases the positive feelings teens get from new and exciting experiences. This is the brain area most commonly implicated in adolescent risk taking, which strikes fear in the hearts of many parents. But evidence suggests that the same brain changes involved in adolescent rebelliousness and risk taking also drive kind and helpful behaviors, such as contributing.

How adolescents benefit from contributing

Giving benefits the giver. According to research, adults who contribute to others have improved moods, lower stress, and fewer health problems. Adolescents benefit in similar ways, and they get their own unique benefits from contributing, as well.

For example, the increased activation of the reward system in the brain may make adolescents value giving more and feel more fulfilled by it. Young people from families in which contributing is a particular value seem to feel this sense of reward even more acutely. Adolescents also report being happier on days when they help their families.

Studies have shown that students who are helpful, cooperative, and sharing tend to be more popular than those who use fear or intimidation to gain status, providing another incentive to contribute. This is particularly crucial to adolescents, who, thanks to hormonal changes beginning at the onset of puberty, are extremely sensitive to belonging and earning respect.

The stress-reducing effects of contributing may also be especially important during adolescence, when teens’ bodies and minds are highly reactive to stress (more so than at any other age).

Most importantly, contributing provides adolescents the experiences they need to complete the key tasks of this life stage: building autonomy, identity, and intimacy. Making meaningful contributions to others allows adolescents to see that they can have a positive effect on the world, giving them the confidence necessary to build autonomy and agency. When their contributions are recognized, young people come to understand their place and value in the world, developing their sense of identity. Having the opportunity to provide meaningful social support to friends and family builds the intimacy they’ll need to form positive, long-lasting relationships in adulthood.

How teens can make meaningful contributions

Adolescents’ increasing connections to those outside of their family allow them to have an impact in many different spheres. Here are some ways they can make substantive contributions, to their immediate family and the wider community.

“When their contributions are recognized, young people come to understand their place and value in the world”

But meaningfully contributing to a family goes beyond chores. Adolescents also need a chance to play a real role in the functioning of the family. Participating in family decision making—about anything from spending decisions to food choices at mealtime to rules around bedtime and homework—is one important way they can contribute. This sort of involvement doesn’t mean they make the decisions, but that their ideas, feelings, and judgments are a genuine part of the decision-making process. Even if their suggestions aren’t followed every time, when their perspectives are seriously considered, they’re contributing to the family.

Contributing to the family has benefits beyond the household. Studies show that young adolescents who participate in family decision making adjust better to junior high school, are more motivated at school, and have higher self-esteem than their peers who don’t have such opportunities. The sense of fulfilling an integral role in a family has been shown to improve teens’ well-being and sense of responsibility. It can even reduce the risky behaviors many of us worry about in our adolescent kids.

There’s one caveat with contributing to family: Increased chores and responsibilities that fall to adolescents as a result of parents’ physical or mental illness or other family traumas can have the opposite effect on their well-being and academic success.

Peers. Research shows that friends are a key source of social support for teens, and that this relationship is an important avenue for contributing. The more equal power dynamics in friendships with same-aged peers allow adolescents to play a more significant role in the relationship than they often can with adults, such as by giving emotional support, offering opinions, and making plans.

In addition to helping each other, teen friends can also motivate each other to contribute more broadly. When middle and high school students believe that contributing is a social norm among their peers, or when they get positive feedback from their friends for contributing, they’re more likely to help a classmate or pitch in money for the group. Adolescents who help others appear to inspire their best friends to do the same.

As busy as your teenager may be, it’s important to leave time for just “hanging out” with friends—the chance to make a friend laugh or to literally be a shoulder to cry on

Meaningful contributions at school will enable students to have a substantial impact on their school environment. This means involving middle and high school students in decision making around coursework, classroom practices, and school policies. Opportunities to choose seating arrangements, learning activities, or grading practices are all avenues for meaningful contributions. Being involved this way in decision making at school has been shown to increase students’ motivation and connection to the school community.

An active, empowered student government is another way for adolescents to make meaningful contributions to their school. Clubs and sports give adolescents a chance to have a real impact on their teammates, and organized service learning programs can help students impact their larger communities.

Not all schools have the know-how or funding to provide all students with equal opportunities to contribute. For those students, community programs can be a valuable alternative.

Communities. Adolescents are physically and cognitively capable of serving their communities and the wider world. For the most enriching experience, they need a chance to have a measurable, notable impact on the organization or population they’re helping, and they need a chance to reflect on the meanings of their contributions.

High-quality volunteer programs also allow adolescents to play an active role in the organization itself. Not all volunteer situations for teens meet those standards. Programs such as 4-H, Boys & Girls Clubs of America, and the YWCA/YMCA generally provide the opportunities young people need to benefit from such contributions.

Yes, adolescents still need support from their parents. But a big part of what they need is for us to see them as the thoughtful, capable, caring people that they have already become. Adolescents flourish when they have a chance to make significant contributions to their families, friends, schools, and communities. That’s how they get what they need to thrive as adults who can make a meaningful difference in the world.