My brother and I will never agree on anything political. I won’t accept that Hillary is evil, no matter how many videos he sends me, and he won’t accept that Biden will be good for the country, even if I show how my brother will benefit from the stimulus. But I love him, he has a good heart, so we just agree to never go there. At least I do. 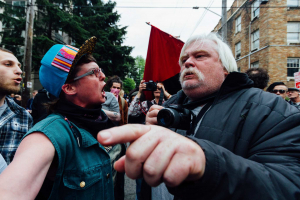 Not all families are able to take that path. Two days after six-term Illinois congressman Adam Kinzinger called for removing Mr. Trump from office, 11 members of his family wrote him to say, “Oh my, what a disappointment you are to us and to God! You have embarrassed the Kinzinger family name!” Kinzinger’s crime was to buck his party’s ideology and align with the opposition’s opinion about the president’s culpability in the riots on January 6.

I’m a psychologist specializing in family estrangement. In 2020, I completed a survey of over 1,600 estranged parents through the University of Wisconsin Survey Center, the results of which are summarized in my new book, Rules of Estrangement: Why Adult Children Cut Ties and How to Heal the Conflict. Political differences seem to be an increasing cause of estrangement. Blood is no longer thicker than water, especially if that water is political affiliation.

Social psychologists have long known that simply identifying with a particular group in competitive environments—no matter how trivial—is sufficient to trigger an evaluation of the other person as belonging to the less desirable out-group. However, with today’s political differences, people feel freer to treat those in the other party with derision, contempt, even aggression. In fact, political affiliation has become the most powerful way that people assess who to be close to and who to reject, “far surpassing differences by age, race, ethnicity, gender, educational attainment, and religious affiliation,” according to a recent Pew report.

I have learned a lot from my research and clinical experience about how to have difficult conversations with family members, and how to heal divides that may feel insurmountable. While each situation is unique, I believe that the principles required to heal an estrangement can be applied to having better conversations with those across the aisle, rehumanizing the other side and creating better conditions for collaboration.

Here’s how those principles can apply to difficult conversations about politics.

Go deeper: As much as you hate your brother’s, mother’s, or other’s politics, try to understand what they find appealing about that perspective. Is it the community (however rabid), the confidence of the leader, the longstanding alliance with the party of one’s family (as demonstrated by Kinzinger’s relatives)? What does it say about their conflicts, their aspirations, or their need to find comfort in those beliefs and affiliations? Seeing what motivates them may cause you to feel empathy rather than contempt.

Seek to understand: Don’t try to prove them wrong, because you can’t. Your goal is to have them see you as an ally, not an adversary. If you get angry or aggressive, you’ll make them defensive rather than receptive. Far better to show that you understand their perspective even if that perspective is opposite to what you know or believe to be true.

Validate where you can: “I hear what you’re saying. I think a lot of people think the way that you do. There are parts of what you’re saying that I completely agree with.” In framing it respectfully, you invite the other to return the favor. For example, my brother and I can agree that the system is rigged, it favors the wealthy, and working people are getting screwed. We disagree about the causes, the solutions, and which political party is best suited to solve our nation’s problems—but that’s a place where we can find common ground and return if things start to get heated.

Find shared values: However insoluble our political differences in the U.S., there is still much that we agree upon. According to Pew, the majority in both parties believe that corporations have too much power, they favor raising taxes on those with high incomes, and they prefer that the U.S. retains its status as sole superpower. While Democrats’ views are generally uniform across generations, Republicans are more diverse in their political opinions based on their age. Younger Republicans are more likely than older Republicans to say that human activity contributes a great deal to climate change, that marijuana use should be legal, that Black people are treated less fairly than white people in the U.S., and that society is not accepting enough of those who don’t identify as a man or woman.

Perhaps the places where younger generations of Republicans and Democrats agree will allow them to do a better job finding common ground in the future than currently seems possible.

Because today we are suffering the consequences of division in our country, from partisan-fueled violence to government gridlock and stalemates on problems that urgently need solving. As a couples and family therapist for the past four decades, I’ve learned that, unless respect and commitment are at its center, nothing good comes from arguing. It rallies the wrong part of the brain, the part that tells us we’re in danger, that the other seeks to hurt us, that we should increase our aggressive stance or get the hell out of the room. If we’re committed to the promise of what America could be, we have to be willing to do hard work even when it’s painful, even when it requires us to look hard at the past, at ourselves, and at our preciously held viewpoints.

Believing that the other is wrong is one thing—thinking they’re deplorable is another. That’s a recipe for hurting a family. And a guaranteed way to ruin a country.