At family gatherings, in bars and restaurants, relatives and friends are shouting at each other instead of engaging in what used to be called political discussions. These high-volume, emotionally charged exchanges are also increasingly the norm in venues ranging from local governments to national ruling bodies across the world. 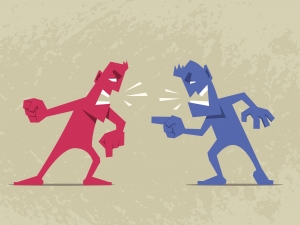 These shout-fests might remind you of a bad marriage—and we think there is some truth in that. We are clinical psychologists who are couples therapists and researchers who evaluate the benefits of interventions with couples. We do not have answers to urgent questions about how to bridge political and cultural chasms, but we do know a thing or two about how to help two people reduce the conflict in their relationship. What are the principles backed up by both research and clinical experience of working with couples who have unresolved differences? How have they been useful in helping couples communicate more effectively about issues on which they disagree? And can these insights be applied to healing political divisions?

We do not assume that Democrats and Republicans—or politicians attempting to negotiate Britain’s exit from the European Union, or Russians debating the power of Vladimir Putin—will suddenly pay attention to these principles. Rather, we offer these ideas with modesty, in hopes that individual readers may find them useful in de-escalating tensions with family and friends with different political and social ideas. While you can’t control what other people believe or how they behave, there are steps you can take to make your conversations more productive.

1. Try to understand their perspective

Before meeting up with someone we expect to disagree with, most of us either think about how to avoid the topic, or we act like lawyers preparing for a trial. We give a great deal of thought to presenting our point of view in a convincing way and to considering the weaknesses and absurdities in the other person’s arguments. While some of this preparation is adaptive, studies suggest that we might find such conversations less troubling and more effective if we took the time to try to understand the perspective of the other person. If the person is someone you know, you can try to reconstruct their side of an argument as best you can. If the person comes from a group with an identifiable point of view, you can examine written material or information from social media that presents the other’s point of view effectively.

Why does all this work? If you can demonstrate that you can understand accurately what the other person is saying, and if you can find some areas of agreement, the other person is more likely to feel heard. And feeling heard tends to reduce the repetition, frustration, and rise in volume that occurs when the other person concludes that you are not listening, you have misunderstood what they have been trying to say, or you are just not very clever!

A more general approach to preparing for a discussion that may get heated is to practice staying in the moment—what is now often called mindfulness. Research suggests that we can reduce the biases that often fuel disagreements by building moment-to-moment awareness of our thoughts, feelings, and surroundings through practices like meditation. Mindfulness can make us more cognizant of the mental shortcuts we take when judging others and help us react less intensely when we feel threatened or upset.

2. Try to confide, not attack or avoid

Dan Wile, a nationally known couples therapist, has pointed out that when we disagree or are upset with each other, there are typically three stances that each person can take: We can avoid, attack, or confide.

Most often when we anticipate a conflict, we tend to engage in avoidance—not raising the issue at all, or stating only a small part of the issue. This may keep the temperature from rising, but it does nothing to resolve disagreements, reduce simmering tension, or formulate actions to solve problems collaboratively.

When one person is on the attack, the most likely response from the other is to fight back or withdraw. This is understandable, but, like avoidance, it does little, if anything, to convince the other to entertain a new idea.

Robert Levenson and John Gottman have been pioneers in studying conflict between opposite-sex and same-sex partners while both are hooked up to equipment that measures their physiological arousal and distress. One of the important findings of this research is that as the disagreement escalates, both partners show sharp increases in physiological arousal, but that for one partner (more often the female), the arousal quickly returns to baseline, while for the other, arousal and distress remain high (more often the male).

This discrepancy tends to result in escalating conflict in which the high-arousal partner attempts to hide the feeling (stonewalling) while the lower-arousal partner is engaged in attempting to solve the problem. When this happens, the problem is that the stonewaller is still upset and their partner is frustrated at the lack of verbal response. Gottman further describes what he considers to be the “four horsemen of the apocalypse.” In addition to stonewalling, he points to criticism, contempt, and defensiveness as emotional nightriders that come along to destroy intimate relationships.

Wile suggests that a more productive strategy is for each person to confide rather than attack or avoid. Confiding involves letting the other person know that you are worried about raising this issue, or that you can see some of the weaknesses in your own arguments or some strengths or at least reasonableness in the other person’s point of view. This confiding style enables people to disagree while maintaining a more collaborative conversation.

3. Make it safe for people to confide in you

OK. It’s easy for us to say that a collaborative strategy will be more productive for both people than an avoidant or attacking stance. But how can we achieve this ideal when we feel passionately about our personal or political beliefs?

There are positive communication strategies we can use to encourage disclosure and collaboration and result in both parties feeling they are being heard. Some of the points we list come from the research on the “Speaker Listener Technique” by Scott Stanley, Howard Markman, and Galena Rhoades, who have shown how couples who take turns at being speaker and listener—not interrupting to get a new point across—and who follow some of the suggestions below show improvement in their relationship over time. They coach couples to:

4. If conversation gets hot, take a break

No matter how well we prepare for an argument or follow good communication guidelines, sometimes our feelings or the other person’s emotions are triggered to the point where one of the four horsemen enters the scene. One or both become critical, defensive, or contemptuous—or go silent while continuing the conversation but not expressing upset. Under these circumstances, it becomes impossible to consider the other’s point of view. We want to underline the seemingly obvious point that people rarely modify their point of view when they are being criticized, shouted at, dismissed, or ignored.

Very often, one of the participants in a heated discussion wants to continue, hoping that in the end the other will see the logic of their point of view. Often the other person tries to get away by leaving the room psychologically or physically. Most couples therapists suggest that their clients agree to a “time out,” which gives both partners a chance to cool off.

But this won’t work unless both people agree on a time to resume the discussion in order to have a “recovery conversation” that is not derailed by feelings of helplessness and anger. That is, a recovery conversation can help to shift from a battle between two warriors, to an exchange between two people working together to address a difference or problem that concerns them both.

Some difficult conversations start because couples need to make an important decision. Stanley, Rhoades, and Markman report that many partners have reservations about what the other proposes, but choose not to express them. Or both partners simply slide into an option rather than struggle together toward a decision, even on important issues like moving in together, or having a baby, or basic values. It seems easier to agree to move in together rather than find two separate places after graduation. One partner may go along with the other’s desire to have a child rather than have a prolonged and difficult fight. Both may choose to keep quiet rather than discuss a serious disagreement about values or politics.

The problem is that down the road, sliders have a much harder time in their relationship than deciders do. Moving in together saves money, but may be premature in terms of the state of the relationship. The reluctant parent, having avoided a pre-baby argument, may now experience heightened levels of individual and relationship stress. Undiscussed value or political issues can lead to increased polarization and emotional distance.

Especially in facing big issues, we recommend that you take advantage of the strategies in steps one to four, rather than skirting around issues in order to avoid a stressful conversation. If you are able to tolerate listening respectfully to each other and slow things down before coming to any final conclusions, you may actually be able to discuss both of your points of view more directly. To lower the tension at the start of a discussion, we often suggest that partners take the tack that “this is a discussion, not a decision.” This often works in couples therapy—and it might work for you when discussing a political issue on Facebook or at the dinner table. Who knows? Nationally, it might even help politicians and activists on opposite sides have more productive discussions with each other.

Imagine Republicans and Democrats on the floor of the United States House of Representatives or Senate arguing about a proposed new law—but this time our legislators are applying insights about how to resolve conflict between couples. A Republican speaker might address the assembled legislators this way:

I want to express my support for this bill, but I also want to acknowledge that my Democratic colleagues have some concerns about how the new law would operate. My understanding of their chief concern is that it will be difficult to enforce. Have I got it right?

A Democrat would respond:

Almost right. What’s missing is a specification of the administrative office that will administer enforcement. I know that my Republican colleagues are leery of creating bigger government, so how can we work together to address the enforcement problem?

And so on, toward compromise and resolution. It’s a nice thought experiment, though this is not how the current United States Congress operates. Getting members of Congress to adopt those guidelines might seem far-fetched—but we believe it is completely possible for ordinary people to follow them. The next time you find yourself disagreeing with an uncle or a neighbor about strongly held ideas and values, try taking some of these steps. You might not win the argument, but you can avoid some antagonism—while keeping your relationships strong.