The nation is locked in a state of polarization unprecedented in the past half-century, with deep, volatile divisions around issues of politics, race, religion, and the environment. These issues can split families, break friendships, and create enormous stress in communities—and yet, having a constructive discussion about the disagreements often seems impossible. 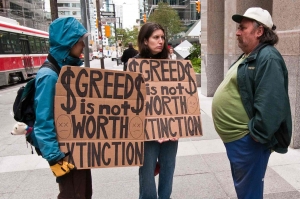 If you’re trying to persuade someone on the other side of that chasm, UC Berkeley political scientist David Broockman says that, chances are, you’re going about it the wrong way. In a series of studies over the past five years, he has found insights that contradict much of what we think we know about engaging those who disagree with us.

When it comes to changing someone’s feelings about issues, he says, data are less compelling than human stories. Listening is more powerful than just talking. Accepting the other person, even if their ideas feel offensive, may open the door to constructive dialogue.

The ideas are counterintuitive. But the studies done by Broockman and Joshua Kalla, a former Berkeley Ph.D. student now on the faculty at Yale University, are backed by data collected in extensive fieldwork, and they’ve won attention for bringing new understanding to the art and science of political persuasion, where traditional tools don’t seem to work.

Their key work has focused on transgender rights and on immigration, two flashpoints in the nation’s culture wars, and they could be valuable across a range of our most rancorous debates, from racial justice to climate change and the November election. While their findings are not a cure-all—far from it, Broockman says—they could offer a path to reduced tension and improved dialogue for a sorely divided nation.

In some senses, the idea is not far from the “how to win friends” nostrums of Dale Carnegie in the mid 20th century, or from some schools of modern psychotherapy. But Broockman’s work rose from his experience as a young gay man growing up in Texas.

During his high school years, he attended a mock state government program with other students, many of them conservative, and found a climate of what he called “super-rampant homophobia.” In the same period, Texas voters approved a ban on same-sex marriage.

“I was a white, upper-middle-class kid who could have had every privilege in the world,” he recalled. “And then, all of a sudden, I realized there’s this big asterisk on that. It’s of course not the same as if I were a person of color, but it did give me insight into what it’s like to be on the wrong end of an important power relationship.”

From that experience rose his interest in political engagement—and in trying to understand people’s attitudes.

He earned his bachelor’s degree from Yale University in 2011, and his Ph.D. from Berkeley in 2015. After four years on the faculty at Stanford University, he returned to Berkeley this year as an associate professor. And while he has published widely on government, elections, and discrimination, persuasion has been a central focus.

Political campaigns are, of course, exercises in shaping opinion, and billions of dollars are spent on that goal. But a 2018 study by Broockman and Kalla shows that such campaigns are often an exercise in futility. After reviewing 49 published studies on political opinion and persuasion, they came to a stark conclusion: “The best estimate of the effects of campaign contact and advertising on Americans’ candidate choices in general elections is zero.”

In other words, persuasion by conventional means in most partisan political campaigns is very rare.

But studies published in 2016 and earlier this year show Broockman and Kalla exploring unconventional means, and it’s here that they broke new ground.

In a polarized climate, on issues of existential importance, it can be difficult even to hear opinions that contradict our own—on issues such as same-sex marriage, for example, or climate change, or Joe Biden vs. Donald Trump. It seems offensive that someone doesn’t see the world as we do, and there’s a tendency to correct them, to tell them they’re not just wrong, but deplorable.

Expressing such frustration may provide emotional relief, but it’s not likely to persuade. In fact, it can make people harden their existing views.

For a 2016 study published in Science, Broockman and Kalla worked with the Los Angeles LGBT Center and SAVE, a South Florida LGBT organization, on a field assessment of voter attitudes toward a new Miami-area law protecting transgender people. One group of door-to-door canvassers, a control group, said nothing to residents about transphobia.

But another group engaged in “deep canvassing,” a process based on asking sensitive questions, listening to the answers with sincere interest, and then asking more questions. If residents expressed bias toward transgender people, the canvasser might ask them to recall a time when they were treated unfairly for being different and what that felt like.

The outcome? “These conversations substantially reduced transphobia, with decreases greater than Americans’ average decrease in homophobia from 1998 to 2012,” the research found. In effect, about 10% of the deep canvassing respondents shifted toward a more sympathetic view of transgender rights, with effects lasting for at least three months.

A second study, published this year, confirmed the 2016 research on transgender rights and showed that this two-way exchange was key to a conversation’s effectiveness. The study also added additional fieldwork on undocumented immigrants—and, again, the deep canvassing had a substantial effect, even though it was conducted during the heat of the 2018 U.S. Congressional election.

Among residents who were not asked about immigration, 29% supported pro-immigrant policies. But for those who were engaged in the reflection and storytelling of deep canvassing, the number rose to 33%; respondents were far more likely to say, for example, that undocumented immigrants should receive legal support and should not have to live in fear of deportation. Again, the impact was durable, lasting three months or more.

“I think, in today’s world, many communities have a call-out culture,” Broockman told Vox. “Twitter is obviously full of the notion that what we should do is condemn those who disagree with us. What we can now say, experimentally, (is that) the key to the success of these conversations is doing the exact opposite of that.”

When people get defensive, they resist

Why does deep canvassing work? Broockman offered a possible explanation.

“People don’t like to be told they’re wrong,” he explained. “So when people hear something that contrasts with their self-image, they immediately start generating counterarguments.”

Deep canvassing short-circuits that dynamic. Instead of presenting facts and data, or value judgments, he said, “you ask questions, dig in, make it a kind of collaborative dialogue where you’re genuinely open-minded. And then you might find that the other person is more able to be open-minded.”

That’s where sharing stories becomes important. “People want to listen to stories,” Broockman continued. “They kind of suspend their disbelief. They say, ‘Alright, I’m hearing a story, I want to get into it. I’m not going to treat this like an argument where I need to counterpunch. This is just someone sharing their authentic experience with me. And then, I’m going to kind of reach my own conclusions.’”

Because bias toward LGBTQ people or other groups can be deeply rooted in identity, this more compassionate approach to persuasion reduces the sense of threat. “Actually changing attitudes is going to require an approach that’s not just based on statistics or arguments,” Broockman said, “but on stories that humanize those groups.”

An expanding sense of possibility

Even with deep canvassing, shifting opinions is difficult. Race-based prejudice is freighted with a long, shameful history, and Broockman predicts that will be especially resistant to change.

Still, he’s hopeful. In his research on immigration, deep canvassing produced a gain of four percentage points—that’s not much, but in a close election, four points can turn defeat to victory. He also sees possible applications for this approach across a range of issues and elections.

Broockman made another observation about conducting the research—one that was informal, but essential: Deep canvassing also opened canvassers’ minds to substantive conversations about difficult issues with those who disagreed with them. Just as the vast majority of voters willingly had such conversations, canvassers trained in the technique were eager to keep having them, too.

That appetite on both sides can create the conditions for change. And it suggests that individuals, too, can use principles of deep canvassing to engage with family and friends trying to build a bridge across the divide.

“We live in an age of righteous indignation toward those who disagree with us,” Broockman said. “It’s on all sides, in so many current social debates. . . . But a lot of that can get tempered when you actually meet and engage with the people who disagree with you. It’s work, and it can be difficult. But what we gain from that, in addition to advocating for our causes, is realizing that we might have more in common than we think.”