When was the last time you experienced awe? Perhaps you were stopped in your tracks by a beautiful vista on a recent hike, or captivated by a painting at your local art museum, or moved to tears at a concert or church. Or maybe you were just sitting on your couch breathlessly watching an episode of Planet Earth. Whatever it was, you probably weren’t thinking much about yourself or your to-do list. 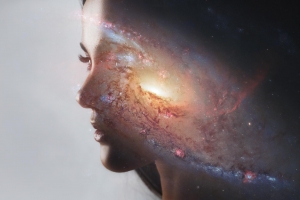 What makes awe so transporting, overwhelming, even mystical at times? Researchers explored this question in a recent study published in the journal Human Brain Mapping by examining what the brain is doing when people have an awe experience.

Before each video clip, participants were told to either passively watch the video (the way one normally would) or to count the number of perspective changes in the video. This allowed the researchers to compare brain activity when participants were immersed in watching—and their minds could wander—versus when they had a focused task to perform while watching.

For the funny and neutral videos, watching passively increased activity in regions of the default mode network (DMN)—a brain system that is particularly active when our minds wander or when we think about ourselves—compared to watching while counting perspective changes. However, watching the awe videos passively did not increase DMN activation as much.

This difference suggests that participants may have been extra engaged while watching the awe videos—even when they didn’t have a task to do—and thus their minds were less likely to wander and start thinking about themselves.

In other words, awe may help stop us from ruminating on our problems and daily stressors. Instead, awe seems to pull us out of ourselves and make us feel immersed in our surroundings and the larger world (which may help explain its tendency to inspire generosity and a sense of connection with others).

Van Elk’s study found one more piece of evidence that awe engages us more with our external world and less with ourselves. Counting perspective changes while watching the awe videos actually increased activity in areas of the fronto-parietal network—a brain network thought to be involved in externally directed attention—more than the other types of videos. “This finding underlines the captivating, immersive, and attention-grabbing nature of awe,” write the researchers.

This study builds on prior research on the benefits of awe. In research by van Elk and others, people in awe-inspiring situations reported feeling the presence of something “larger than themselves,” felt less focused on themselves and their concerns, and drew smaller self-portraits than participants in more mundane situations. (Researchers call this feeling of being smaller and less concerned with oneself the “small self.”) The new study’s brain scans complement the survey results in earlier studies, which can be prone to bias and rely on participants’ memories rather than real-time responses.

What does this mean for you? If you feel a need to get out of your head, go take in that vista, concert, or whatever helps you find your awe—it just might help.