Warning: This article contains spoilers, as well as descriptions of sexual assault.

At first, the Netflix miniseries Unbelievable would seem to be an unlikely source of uplifting messages about human connection and understanding. 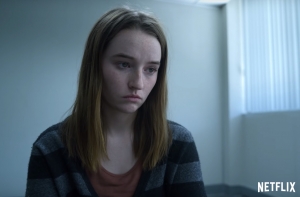 Based on a Pulitzer-prize winning investigative article called “An Unbelievable Story of Rape,” the series—co-created by Susannah Grant with novelists Ayelet Waldman and Michael Chabon—follows the story of Washington State resident Marie Adler (played by Kaitlyn Dever), after she is brutally raped by a stranger in 2008.

Adler, a former foster child and low-end retail worker, becomes victimized afresh when the two middle-aged male investigating detectives, along with her former foster parents, start to doubt her version of the crime. This is partially because of her flat emotions, which we now know are part of the fight-flight-freeze response to trauma. They eventually convince her to say she fabricated the rape—and she is charged with false reporting.

As viewers, we know Marie is telling the truth and are heartbroken to see how the police, her boss, her social workers, and even her friends turn on her. She loses her subsidized home, her job, and her foothold in society. It’s at this point that she tells her court-mandated therapist that the only way to protect yourself is to never trust another human being.

As Adler’s story unfolds, we watch another unfold in parallel. This one takes place several years later, as two other detectives try to solve a series of rapes in various Colorado cities. The crime details are a match for Adler’s case, and, indeed, the same man turns out to be responsible. But there’s a huge difference in the two stories: In Colorado, the investigation is led by two female detectives. Rather than gaslighting the victims they are working with, they listen.

The contrast with Adler’s case is stark.

After Adler is raped, she’s sent to the hospital where she’s forced to repeat her story over and over to a lineup of health care workers who treat her like an object. They follow the rules and treat her body, but they almost ignore the emotional trauma of the rape. As she is set to leave the hospital, a nurse rushes in to hand over a paper bag filled with a prescription for the morning-after pill and to rattle off a list of reasons to call the hospital. At the end of the list is suicidal ideation, thrown in with the same blasé attitude as excessive bleeding and hives.

But Colorado detective Karen Duvall (played by the amazing Merritt Wever) is a study in active listening. When she first interviews the initial victim, Amber Stevenson (played by Danielle Macdonald), she cites research to let Stevenson know why she needs to hear her recount her rape right away. Duvall listens silently, with her eyes directed at the other woman’s face. She asks for personalizing details about Stevenson’s life. 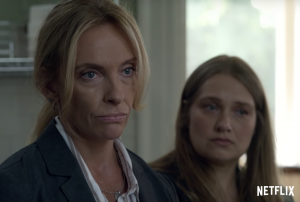 Duvall’s colleague, Grace Rasmussen (played by tough-as-nails Toni Collette), is older, more jaded. She acknowledges that to deal with trauma everyday is difficult, joking that the police motto could easily be, “To serve, protect, and emotionally withhold from your partner.”

Yet when the two women are on a stakeout together, it’s a chance to talk about emotions and relationships. When a male police officer later takes a personal call to deal with a childcare issue and then bashfully apologizes to Duvall, she tells him, “Never apologize for taking care of your family.”

A major trope in crime fiction and crime drama is the lone wolf, the solitary iconoclast who buckles the dominant power paradigm to achieve results. Unbelievable turns that trope on its head, with the detectives pulling together as a team to find the rapist. His DNA links him to Marie Adler’s closed case, much to the astonishment of the original Washington detective, Robert Parker (Eric Lange).

He seeks Adler out, tells her that her rapist was caught, and hands her a check for $500 (the fine she received for filing a false report). But he doesn’t apologize. Adler goes on to secure an attorney, who fights for a larger settlement for her, enough to leave town and start new somewhere else.

As she’s leaving town, Adler stops by the police station to confront Parker. She tells him that she received a settlement but adds, “You know what I never got, ever, from anybody? An apology.”

Parker tell her he’s “very, very sorry,” but without offering specifics or trying to make amends. His sorry doesn’t meet the standards for an effective apology.

In the show’s final scene, Adler talks on the phone with Duvall, whom she’s never met in person. Duvall tells Adler, “Of course I know who you are,” and she lets her talk without interrupting:

I spent my whole life trying really hard to believe that people were basically good, even when the ones I knew weren’t. Then this thing happened, the rape, and it just became harder for me to believe that there was any good in the world. And that was the hardest part of this whole thing, waking up feeling hopeless.

But then, out of nowhere, I hear about these two people in another part of the country looking out for me . . . and more than anything else it was hearing that about you guys that changed things completely. I wake up now and I can imagine good things happening.

“You’re welcome,” responds Duvall, ending a horrific story of rape and victim shaming with the power of human connection, gratitude, and compassion.