At this month’s Golden Globe awards, women seized the #MeToo moment in a big way. Nearly every actress in attendance wore black to signify support of sexual assault survivors and some spoke about their commitment to ending harassment and assault. Oprah Winfrey gave a barn-burning speech celebrating women’s dignity that led to some loose talk about her running for president.

This backdrop of female solidarity made men’s silence suddenly visible. “Standing by like accessories,” wrote Claire Atkinson of NBC News, “men at the awards show failed to use the spotlight to bring attention to women’s inequality and the power of speaking up.” 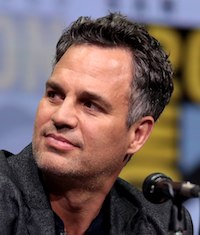 Actor Mark Ruffalo was one of the few men to offer public support to women at the Golden Globes. "Wearing black today in solidarity with the men and women asking for respect and equality across industry lines," he tweeted. "Let's bring a stop to sexual harassment in the workplace."

Though a few men did sport “Time’s Up” pins, something held almost all of them back from voicing that support openly. What was that force? While some might have consciously wanted to yield the stage to women at the Golden Globes, that doesn’t explain why so few later released statements in support—or why we don’t see much wider movement among men against sexual harassment and assault.

Women are more than twice as likely as men to report being sexually harassed. It stands to reason that the people who are most negatively affected by a behavior are most likely to speak out against it. There are bystander training programs, such as Hollaback!, that help motivate people to act against harassment even if they are not members of frequently-targeted groups. However, efforts to teach men to empathize with women and intervene against harassment can be undermined by masculine ideals that put “bros before hos,” to quote one common expression.

“The role of masculinity in some ways functions to retain structures of sexism,” says Emily May, Hollaback’s executive director. “There are questions that arise: If you’re not objectifying women, does that mean you’re less of a man?”

Even empathic men who consciously reject negative ideals may—like many women—just not know what to do in the face of harassment and assault. Activists and researchers alike say mobilizing men will require spreading awareness about ways they can best intervene in fraught harassment situations.

Above all, would-be interveners must be willing to risk vulnerability and put themselves on the line. “Courage is what’s needed most right now,” says Mike Dilbeck, founder of the Response Ability project, who teaches workshops on how to intervene effectively.

What stops men from taking a stand?

The women and men at the Golden Globes are the stars of Hollywood movies. Watch one of those for ten minutes and our culture’s masculine norms come through loud and clear: Men should act macho, strive to score with women, and exert dominance wherever they can. Given the currency these norms still have in the Western world, it’s no wonder many men (though certainly not all) embrace them to fit in.

When men in an Indiana University study scored highly on certain aspects of the Conformity to Masculine Norms Inventory (CMNI) inventory—professing that men ought to dominate women, for instance, or that they should strive for a “playboy” identity—they were inclined to have more hostile and sexist attitudes toward women. Such anti-woman views bode poorly for these men’s potential to stop harassment, since intervention requires empathy and real concern for the target of a jibe or grope. Further research at Georgia State University confirms that when men were exposed to a misogynistic social norm, they were less likely to intervene when they witnessed sexual aggression.

Men’s long-established position atop our society’s ladder of power may also affect their willingness to speak up. Subjects with a “high power” mindset in a Northwestern University study were less adept at reading people’s facial expressions, indicating an empathy deficit, and they were also less likely to take other people’s perspectives into account as they assessed a situation.

Worse, the experience of having power can make people more likely to give in to their worst impulses. As Greater Good Science Center director Dacher Keltner writes:

Powerful men, studies show, overestimate the sexual interest of others and erroneously believe that the women around them are more attracted to them than is actually the case. Powerful men also sexualize their work, looking for opportunities for sexual trysts and affairs, and along the way leer inappropriately, stand too close, and touch for too long on a daily basis, thus crossing the lines of decorum—and worse.

It’s easy to see how deficits in empathy and social awareness could fuel a powerful boss’s assumption that harassing others—or even “grab[bing] ‘em by the p***y,” as Donald Trump once bragged of doing—is somehow OK. In fact, when participants in a University of Tennessee study were primed to recall wielding power over another, they scored higher on a scale that assessed their chances of sexually harassing in the future.

But bystanders in power’s thrall might also be less apt to intervene on a victim’s behalf. Someone with low empathy will be less inclined to speak up for others, and someone drunk on power won’t want to risk losing a high-rung position to call out a colleague.

What’s the best way to flip these toxic scripts and empower men to speak out?

To a certain extent, that’s an open question. There have been few studies to date on how to help men transform from passive bystanders to active ones when they witness harassment. “There is some excellent research on the bystander effect generally, but far less specifically [on] men in the context of sexual harassment,” says U.S. Naval Academy psychologist Brad Johnson, who cites a need for research-tested strategies to help men intervene confidently and consistently.

Still, experts who work to mobilize men against harassment have gleaned some useful insights about what works—and the first step involves empathy.

“Ninety percent of the work that you have to do is convincing them that it matters enough to intervene,” says May. This convincing could involve, say, having would-be interveners talk to people who’ve been harassed to get a sense of how being targeted has affected their lives.

Other research suggests that when men learn about suffering from a victim’s viewpoint, there’s a lower likelihood that they will sexually harass. That underscores the idea that to awaken men to harassment’s true impact, it’s critical for them to take the perspective of those being harmed—especially since prevailing masculine norms can blunt their empathy and awareness of that perspective.

“We don’t think about harassment across the lifespan,” May says. “A lifetime of [harassment] has the same traumatic impact as more severe forms of violence.”

This is why it is so necessary for the targets of sexual harassment to tell their stories, as many have done as part of the #metoo movement. Humans are born story-tellers (and story-listeners)—and as psychologist Paul Slovic’s work reveals, it’s personal stories, not dry statistics or generic platitudes, that most inspire people to act in unjust situations.

Of course, for the stories to have impact, men need to hear them—and really take them to heart.

From bystanding to “upstanding” 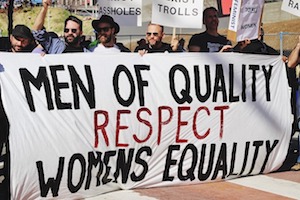 From that place of empathy, men might be more motivated to make intervention a low-key, everyday practice—but they still need the tools to do that, which is why training and discussion are so important.

Action can be as simple as saying “Cut it out” when a colleague tells a demeaning joke. The more people practice taking constructive action on a regular basis, notes psychologist Philip Zimbardo, the more effective they’ll be at intervening in the future. The force of habit, and the confidence that stems from prior action, take over—and that’s one reason workplace training programs can make a difference.

If the harasser reacts angrily, we can learn to defuse the situation by separating the harasser’s action from his or her intention, which may not have been to hurt someone. “What you’re doing is acknowledging the emotion—like, ‘Hey, I hear that you’re really frustrated, that this is confusing,’” May says. “Then say, ‘Things like that can make our co-workers feel uncomfortable, and I know that’s not what you’re trying to do.’”

Strength in numbers can help, too. Men who want to start calling out predatory behavior can cement their resolve by teaming up with friends or colleagues. Together, make a commitment to speak up when someone says or does something that assaults another’s dignity—and promise to back each other up when one person takes the lead in intervening.

There are also structural solutions. Businesses and nonprofit organizations can hire and promote more women, which can shift the norms of the organization in women’s favor. To support men, company and organization managers can create an atmosphere where speaking up doesn’t mean breaking unspoken masculine codes or risking job status. Men considering calling out abuse or harassment “need to know they’re going to be protected,” Dilbeck says, “[that] if they do speak up somebody’s going to have their back.” Conversely, he adds, a good-old-boys culture can deter witnesses from speaking up about harassment. “If they’ve seen other people be ostracized, they’re like, ‘Oh, hell no!’”

There is always a place for activism, online and in real life. Since storytelling is so key to moving people to action, we can amplify #metoo or #iwillspeakup stories on Facebook or Twitter. Speaking out against abusive language on social media can help change the tone of the discussion. In general, making statements for safety, consent, and respect on social media—and in face-to-face conversations—can support other men and women in the fight against sexual harassment and assault. We can march, when a march is called. We can vote for candidates who pledge to stop sexual abuse. All of these actions shape a culture in which those who call out harassment will be embraced, not belittled.

Franco believes that older men must take the lead with younger ones, especially fathers with sons, setting unequivocal standards of behavior while still creating space for honesty and contemplation. “Knowing what to tell young men first means we need to have a frank conversation amongst ourselves, as fully grown adults, men and women, about these topics,” he says. “If handled correctly, these are moments for self-reflection and improvement on the journey to becoming fully a man.”

For men (and women) who remain unsure about intervening, taking the long view of what’s at stake can help tip the balance toward action. Standing up for just one harassment victim could save dozens of potential future victims from a similar fate, Mike Dilbeck says.

“You have no idea whose life you’re going to protect by speaking up.”