Near the end of last year, Miami Dolphins player Jonathan Martin left the team due to mistreatment from teammates, which included receiving threatening phone messages from another player. 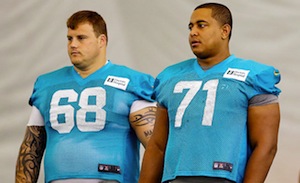 The incident raised concerns about hazing within the NFL, but it also prompted some to suggest that Martin himself bears at least partial responsibility for his fate. For example, another NFL player stated in an interview that Martin is “just as much to blame because he allowed it to happen” and should have behaved like a man. Others argued that Martin was oversensitive and made himself an easy target. We heard similar sentiments when college player Michael Sam and former NFL player Wade Davis recently came out as gay.

This sort of victim-blaming is not unique to bullying cases. It can be seen when rape victims’ sexual histories are dissected, when people living in poverty are viewed as lazy and unmotivated, when those suffering from mental or physical illness are presumed to have invited disease through their own bad choices. There are cases where victims may indeed hold some responsibility for their misfortunate, but all too often this responsibility is overblown and other factors are discounted.

Why are we so eager to blame victims, even when we have seemingly nothing to gain?

Victim-blaming is not just about avoiding culpability—it’s also about avoiding vulnerability. The more innocent a victim, the more threatening they are. Victims threaten our sense that the world is a safe and moral place, where good things happen to good people and bad things happen to bad people. When bad things happen to good people, it implies that no one is safe, that no matter how good we are, we too could be vulnerable. The idea that misfortune can be random, striking anyone at any time, is a terrifying thought, and yet we are faced every day with evidence that it may be true.

In the 1960s, social psychologist Dr. Melvin Lerner conducted a famous serious of studies which found that when participants observed another person receiving electric shocks and were unable to intervene, they began to derogate the victims. The more unfair and severe the suffering appeared to be, the greater the derogation.

Follow-up studies found that a similar phenomenon occurs when people evaluate victims of car accidents, rape, domestic violence, illness, and poverty. Research conducted by Dr. Ronnie Janoff-Bulman suggests that victims sometimes even derogate themselves, locating the cause of their suffering in their own behavior—but not in their enduring characteristics—in an effort to make negative events seem more controllable and therefore more avoidable in the future.

Lerner theorized that these victim blaming tendencies are rooted in the belief in a just world, a world where actions have predictable consequences and people can control what happens to them. It is captured in common phrases like “what goes around comes around” and “you reap what you sow.” We want to believe that justice will come to wrongdoers, whereas good, honest people who follow the rules will be rewarded.

Research has found, not surprisingly, that people who believe that the world is a just place are happier and less depressed. But this happiness may come at a cost—it may reduce our empathy for those who are suffering, and we may even contribute to their suffering by increasing stigmatization.

So is the only alternative to belief in a just world a sense of helplessness and depression? Not at all.

In February, the NFL itself published a 144-page report on the Martin incident that compelled the organization to strengthen its code of conduct on and off the field. The report also triggered far-reaching conversations about bullying among owners, coaches, sports journalists, and players.

When Wade Davis spoke last month about being gay in the NFL to a gathering of owners and coaches, the press reported a positive response from the audience. “It’s got to be in the conversation,” Denver Broncos coach John Fox told ESPN. “I’ve probably not done as good a job with that up until now, but after Wade’s presentation, it’s high on my list the first time I talk to my staff when we get back and my football team.’’

People can believe that the world is full of injustice but also believe that they are capable of making the world a more just place through their own actions. One way to help make the world a better place to fight the impulse to rationalize others’ suffering, and to recognize that it could have just as soon been us in their shoes.

This recognition can be unsettling, but it may also be the only way that we can truly open our hearts to others’ suffering and help them feel supported and less alone. What the world may lack in justice we can at least try to make up for in compassion.