Picture this: You’re a junior assistant working for a powerful Hollywood producer. You’re ecstatic at your good fortune and hope this position will help you break into film. But your boss has a sketchy reputation when it comes to women, and one day he nuzzles up to a young rising star, who looks horrified. Then he asks you to leave the room. What do you do?

The blockbuster allegations against film producer Harvey Weinstein have many of us wondering how we’d navigate similar scenarios. What do you do when your colleague tells you the department head propositioned her in the hallway? How do you react when the subway strap-hanger next to you grabs a fellow rider’s behind?

Choosing the right response can feel daunting. A Queensland University of Technology study reports that bystander reactions to sexual harassment are often muted or non-existent. When you do act decisively, though, you can have a major impact. In a York University study of bullying incidents, intervening bystanders were able to stop aggressors more than half of the time.

But how? Here are seven research-tested ways to step up against sexual harassment that will get results.

1. Shift the focus—and record the evidence 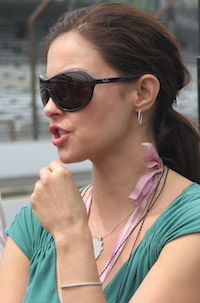 Ashley Judd is one of at least 30 women who have reportedly accused Harvey Weinstein of harassment. © Manningmbd / CC BY-SA 3.0

When it comes to stopping harassment, “most people think that the only approach is direct confrontation,” says Mike Dilbeck, founder of the Response Ability project, who leads workshops on effective intervention. “That’s not the right approach a lot of times. It can backlash.”

If direct intervention isn’t comfortable or possible, Dilbeck recommends doing something that stops the harassment in an under-the-radar way. That could mean “accidentally” spilling a beer on a party guest who’s making aggressive moves on his date, which redirects his attention to his sopping shirt. Or it could mean switching seats on the subway when you see someone getting harassed.

“I have intervened several times by simply having women come sit with me,” says Jessica Seigel, a writer and adjunct professor at New York University. Once when she did this on a train, she says, “another woman on the other side scooched in on their left flank, me on the right flank, in a sense creating actual physical cover.”

You can also discreetly film harassment incidents with your smartphone and write down exactly what you’ve witnessed. That creates an evidentiary record should the person affected decide to pursue legal action.

Sexual harassers typically act only in specific situations where they feel comfortable doing so, and you can use your knowledge of their tendencies to stave off potential incidents before they happen.

If a coworker is alone in a room with a supervisor known to be a repeat harasser, for instance, you can come up with a reason to enter the room yourself. And, if you’re in a relatively powerful position at a company that isn’t taking action against known harassers, you can arrange for them to be transferred to assignments where they won’t have access to new targets. While obviously not a permanent and systemic solution, it is one step an individual with power can take when the system fails.

3. Resist the urge to normalize

After people watched a video clip of women being portrayed as sexual objects, their sensitivity to sexual harassment took a hit, according to a 2017 study at Italy’s University of Padova. Compared to members of a control group, the video watchers were less likely to speak up when they later witnessed a sexual harassment incident in real time, and they were also slower to recognize that harassment was going on in the first place.

This suggests an insidious normalizing process in which harassment can start to seem par for the course. Over time, a toxic culture can make some people downright blasé about harassment—like the talent agent who quipped about Weinstein, “He asked for a few massages? Waaah! Welcome to Hollywood!”

To combat our general tendency to shrug things off, psychologist Philip Zimbardo’s Heroic Imagination Project has trained people to practice a split-second version of mindful awareness in which they ask themselves something like, “What action is consistent with the kind of person I want to be?”

This kind of heightened awareness may also help you empathize with a harasser’s target, says University of Richmond psychologist Scott Allison, author of Heroes: What They Do and Why We Need Them. “You become synchronized with that other person, making you more likely to act on their behalf.”

4. Tailor your response to an incident’s severity

The definition of sexual harassment can be notoriously slippery. There are countless ways to make a target or listener feel uncomfortable that fall short of a full-on grope or profane insult.

In these types of blurred-line situations, the magnitude of the offense can inform the magnitude of your response. If someone tells a dirty joke in mixed company while making eyes at a colleague, you’re probably not going to submit a formal write-up to his boss. But a forthright remark like, “Seriously? That’s vile. People don’t want to hear it,” can be very effective. Not only does it shut the offender down, it also influences what others consider appropriate behavior.

The key with seemingly minor offenses, Allison says, is “nipping it in the bud at an early stage,” which helps contribute to a culture of mutual respect.

5. Take a bold stand and own it

Sure, you can sometimes cut harassment short with a well-chosen comment. But other times the casual approach won’t cut it—when the offense is major, or when repeated warnings go unheeded. In cases like this, the potential cost of calling out a harasser can be significant.

In a 2015 Australian study analyzing bystander behavior, a high proportion of observers failed to take action against the harassment they saw, because they feared losing professional standing, being targeted by superiors, or being cast aside socially. The greater the power differential between an aggressor and a reporter, the more realistic and damaging such consequences may be.

If you’re contemplating direct action against a harasser and you’re not under intense time pressure, try spelling out exactly what you believe is at stake. Which is more important to you—holding on to a particular job/friend/status, or shutting down an aggressor who intends to target others in the future? How likely is the outcome you most fear? If you don’t speak up now, will you regret it later?

Thinking through these kinds of questions helps you clarify your moral priorities, which will bolster your self-assurance should you decide to intervene. “It’s not getting rid of fear,” Dilbeck says. “It’s making a judgment call that something else is more important.”

Most organizations have rules that forbid sexual harassment, but many do not sufficiently protect those who report harassment they’ve seen—and that can be a major problem. Once the whistleblowing process gets started, Allison says, witnesses need to feel free to report misconduct without dreading retaliation. “What we’re talking about is making it easier for people to do the right thing.”

If your organization does not have strong guidelines in place to protect reporters, approach your department head or manager to discuss the issue. You could propose modifying the code of conduct to spell out clear consequences for retaliation or establishing a formal complaint system for reporters to use if they experience blowback. (Of course, make sure you also know the ins and outs of the existing harassment complaint process so that you have a clear idea of how you’ll proceed if you need to report right away.)

7. Line up allies and use them wisely

The conspiracy of silence that grows up around sexual harassment often compounds its destructive power. Harvey Weinstein got away with his actions for decades because almost no one dared to call him out.

Conversely, a few courageous voices raised in unison can curtail harassment in dramatic ways. When a core group of victims and observers took the risk of speaking up about what Weinstein was up to, millions joined them in condemning his actions, and he was booted out of the company he had helped found.

In the same way, when you coordinate your efforts with those of like-minded others—approaching your boss as a group with harassment concerns, for example, or consulting with seasoned activists to figure out the next ideal steps to take—your positive impact multiplies. You can also ask others who support you to intervene in harassment situations where you don’t feel comfortable, says Brandi Mora, a victim advocate for the U.S. Air Force.

Many times, building strength in numbers starts with being brave enough to sound others out about the harassment you’ve seen. “Talking to someone else—‘Do you know this is happening?’—a lot of times they’ll go, ‘Yeah, I [didn’t] think anybody else did,’” Dilbeck says. That kind of confirmation and support goes a long way when you need to risk pushback and ridicule to make sure justice gets done.