When I first heard accounts of film producer Harvey Weinstein’s predatory behavior, my mind devised punishments fitting for Renaissance Europe or the film A Clockwork Orange: Cover his face with a shame mask widely used centuries ago in Germany; shock his frontal lobes so that he’d start empathizing with the women he’s preyed on. When we learn of injustice, it’s only human to focus on how to eliminate or punish the person responsible. 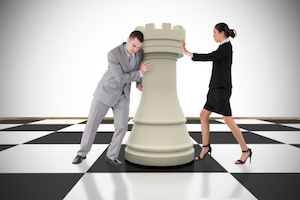 But my research into the social psychology of power suggests that—without exculpating corrupt individuals—we also need to take a hard look at the social systems in which they commit their abuses.

For 25 years, I and other social scientists have documented how feeling powerful can change how ordinary citizens behave—what might be called the banality of the abuses of power.

In experiments in which one group of people is randomly assigned to a condition of power, people in the “powerful” group are prone to two shortcomings: They develop empathy deficits and are less able to read others’ emotions and take others’ perspectives. And they behave in an impulsive fashion—they violate the ethics of the workplace. In one experiment, participants in power took candy from children without blinking an eye.

Our research also shows that these two tendencies manifest in inappropriate sexual behavior in male-dominated contexts, echoing the accounts of the women assaulted by Weinstein. Powerful men, studies show, overestimate the sexual interest of others and erroneously believe that the women around them are more attracted to them than is actually the case. Powerful men also sexualize their work, looking for opportunities for sexual trysts and affairs, and along the way leer inappropriately, stand too close, and touch for too long on a daily basis, thus crossing the lines of decorum—and worse.

These findings from laboratory studies tell us that abuses of power are predictable and recurring. So too does a quick reflection on history. While I’ve been studying power, each year there’s been a new example of a powerful man sexually abusing others, and in every imaginable context—religious organizations, the military, Capitol Hill, Wall Street, fraternities, sports, the popular media, tech, labs, and universities.

We should also take a lesson from the now-canonical studies of Stanley Milgram on obedience to authority. Those studies, inspired by Milgram’s quest to understand the conditions that gave rise to Nazi Germany, showed that authoritarian contexts can prompt ordinary, well-meaning citizens to give near-lethal shocks to strangers off the street. In a similar fashion, contexts of unchecked power make many of us vulnerable to, and complicit in, the abuse of power. We may not like what’s going on, but many of us wouldn’t do anything to stop it. This doesn’t excuse the rest of us any more than it excuses the powerful for their crimes, but it should prevent us from telling ourselves the comforting lie that we’d behave better than the people in The Weinstein Company who reportedly knew what Weinstein was doing and failed to put a stop to it.

The challenge, then, is to change social systems in which the abuses of power arise and continue unchecked. And on this the social psychology of power offers some insights.

First, we need to hear tales from those abused by the powerful, difficult and unsettling as it can be to share these stories. Kudos to the brave people who are calling out the bullying and sexual abuse of Weinstein and others. These tales galvanize social change. For example, when English citizens started to hear the stories about the treatment of slaves on slave ships in the 1700s, the moral calculus of the slave trade started shifting, and antislavery laws followed. Telling such stories also functions as a means by which those with less power construct the reputations of those in power and constrain their impulsive tendencies.

We are also learning of the many benefits of women rising to positions of power, from lower rates of corruption to more-profitable bottom lines. Hollywood is one of the most male-dominated sectors, where only 4 percent of directors are female; more female directors and producers would change the balance of power in filmmaking. Studies show this kind of systemic change will reduce the likelihood of sexual abuse. For example, ethnic minorities are more likely to be targeted in hate crimes as the numerical advantage enjoyed by whites increases. Greater numerical balance between people of different groups constrains the abuses of power: Those from less powerful groups have more allies, they are more likely to be watchfully present in the contexts in which the powerful abuse power, and they are more likely to feel empowered to speak truth to power.

Finally, we need to take on the myths that sustain the abuses of power.

Social scientists have documented how coercive power structures sustain themselves through social myths, which most typically justify the standing and unfettered action of those at the top. We’ve heard them before: “Women aren’t biologically equipped to lead”; “African Americans aren’t worthy of the vote”; “He may scream at people and cross some lines, but he’s a genius.” And a favorite in Hollywood: “Women are turned on by men with power like Weinstein.” Actual scientific studies find something quite different: When women (and men) are placed into positions of less power, their anxiety, self-consciousness, and worry rise dramatically, and their pleasure and delight, including sexual, are turned off.

This moment has the potential to become a tipping point in the fight against systemic sexual assault. For it to live up to the promise of this billing, we have to recognize the banality of Harvey Weinstein, and turn our attention to changing the social context in ways that make the human tendency to abuse power a thing of the past.

This was originally published on October 13, 2017 by Harvard Business Review as “Sex, Power, and the Systems That Enable Men Like Harvey Weinstein” by Dacher Keltner, © Harvard Business School Publishing. Used by permission.