The entire United States is grappling with the novel coronavirus pandemic. However, not all areas have been equally affected so far—and there are huge differences between how urban and rural areas have been responding to the threat.

According to Gallup polls, Americans who live in areas with high population density are far more likely to practice basic social distancing—like avoiding stores and restaurants—than those in the more rural parts of the country. In rural areas, only 42 percent are taking these precautions. In the densest cities, two thirds are doing so. That’s a huge 24-point difference. 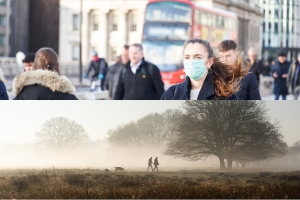 This difference in individual behavior has played out on the level of policy and leadership. In the state of Utah, Republican Governor Gary Herbert issued orders closing schools and barring dine-in at restaurants and bars. But the rural backlash came swiftly. Seventeen county commissioners and one state representative, primarily from the sparsely-populated southern corner of the state, wrote a letter to Herbert calling for “return to normalcy” and arguing that the destructiveness of the virus “absolutely and in no way supports the level of concern that has been raised and the panic that has spread.”

This stands in stark contrast to the responses from many urban politicians—starting with California Governor Gavin Newsom—who have quickly issued stay-at-home orders and are requesting fines for those who violate them. “California is mobilizing every part of government to support our health care delivery system, its workers, and those among us who are most vulnerable to COVID-19,” Newsom said in March. In fact, California’s early, aggressive efforts to “flatten the curve” were so successful that the state felt able to loan out ventilators to New York and other coronavirus hot spots.

What’s behind this gap in urban and rural responses to COVID-19? To find the answer, we spoke with public-health experts across America, seeking to understand why it exists and what we can do to encourage more Americans to unite behind taking the measures necessary to lessen the impact of the pandemic.

We need to start with one simple fact: Population density does increase awareness of the danger of infection. So far, America’s hotspots are in the most densely populated cities and states. New York City is a densely-packed hub for many international travelers—and it’s now the most heavily affected location in America. Knowing people who are getting sick makes it feel realer than hearing about a disease on the news.

Achla Marathe is a professor at the University of Virginia’s Biocomplexity Institute, who has studied the pathways of influenza epidemics in the past. “Rural networks are pretty sparse compared to urban regions’ social networks,” says Marathe. Even when social-distancing compliance levels are the same, rural regions just aren’t as affected by pandemics.

However, experts emphasize that rural areas still have special vulnerabilities. The Southwest Georgia town of Albany, for example, has become one of the region’s hotspots. Why might that be?

In 2009, a group of researchers from Kansas State University set out to study how rural areas respond to infectious disease outbreaks in a series of different papers. “There is no public transportation [in rural areas] so there is no aggregation of people in buses or metros,” says Caterina Scoglio, an engineering professor at Kansas State University and one of the authors of the study. “[But] there are vulnerabilities, too.” 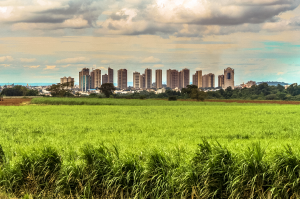 She points to the fact that rural populations tend to be older on average, which is a particularly relevant risk factor for the novel coronavirus. Obesity, another risk factor, is also more prevalent.

And then there are the social behaviors. Although Scoglio’s studies did not look extensively at urban populations as a comparison, they found cultural patterns in their research they believe are more common in rural areas.

For instance, she said, people living in rural areas tend to have more tight-knit social networks—where visiting with your friends and family is common behavior. While consumers in urban areas often have many different locations to shop, a rural town may rely on a single Walmart for all of their essential goods. Rural church-goers also tend to be more regular in their attendance than people in urban areas.

Scoglio’s team administered surveys to people in rural Kansas towns asking them about how they’d change their behavior in the event of an infectious disease outbreak. Almost half of respondents said they would “still visit at least one or two households outside of their home if there was a serious epidemic and radio/TV/internet had told them to remain home and not visit with others.”

These tighter social networks mean that although rural Americans have much lower population density, they still have significant risks for exposure if the disease gets a foothold in a community. Despite their lack of density, rural communities may be uniquely threatened by their poor health infrastructure. As one Georgia state representative recently pointed out, 95 out of 159 Georgia counties have no ICU beds.

Dr. Michael Brumage, the director of the Preventive Medicine Residency Program at the West Virginia University School of Public Health, analogized the situation to that of a war with a slowly-moving front:

This is like a big battlefield in the first World War. On one hand, you have soldiers who are sitting in the mud and the rain and the sun who have no idea that the Battle of the Somme is going on at the other end of the line. And so, for them, it’s a totally boring experience. And their ideas about warfare are shaped by that experience. Whereas the people who are in the Somme, which is an industrial massacre on a mass scale, is the other experience. That’s why I think there’s this New York versus much more rural part of the United States where the war doesn’t appear to be as vicious as it is to the participants in the battle.

The role of politics

Unfortunately, political differences may also be driving a wedge between rural and urban areas.

“In much of rural America, we are conservative compared to both coasts,” Brumage says. “And so people will gravitate towards watching news sources that downplayed the pandemic early.”

In recent national elections, rural and urban parts have grown increasingly politically polarized, with smaller counties finding themselves in the camp of conservative Republicans while liberal Democrats dominate the big cities. 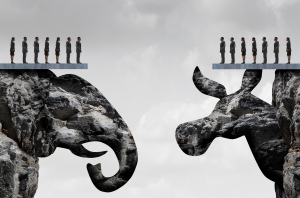 Early in the pandemic, conservative media and politicians downplayed the severity of the disease, which likely had some impact on how some Americans viewed the crisis. As President Trump said on January 22: “We have it totally under control. It’s one person coming in from China. We have it under control. It’s going to be just fine.”

One working paper looking at survey data suggested that partisanship is a powerful determinant of one’s health behavior during this crisis, with Republicans much less likely to engage in behaviors like washing their hands, probably influenced by leaders like Trump.

Research shows that people’s preexisting opinions often shift to align with the political positions of the parties they are affiliated with. This effect may even matter at the elite level. President Trump’s early tone on the virus shifted from sanguine to more alert after a visit from Fox News host Tucker Carlson, who urged the president to take the virus more seriously.

The good news is, there are signs that the divide between urban and rural communities is starting to close.

A Pew survey conducted through late March found that the gap was starting to shrink, with 61 percent of rural Americans agreeing with three quarters of urbanites that the viral outbreak is a “significant crisis.”

While there’s still a gap, substantial majorities of people in both groups are starting to take it more seriously. Pew notes that between Democrats and Republicans, “both groups have become significantly more likely to say the virus presents major threats” to the U.S. economy, the health of the total U.S. population, their personal financial situation, and their personal financial health, than they were in early March.

While many liberals on social media blame an anti-science bias among conservatives for the gap, a soon-to-be-published study by four British and American researchers combined survey data and an experiment to find that it is fear of the disease—not political orientation—that drives social distancing and public health behavior.

The researchers conclude that “in times of (inter)national crisis, people can forgo their ideological commitments and behave consistently with governmental advice in pursuit of a common public health good.”

There’s an important caveat: 80 percent of the study’s participants were British. “It is hard to make much out of the non-British participants and even more difficult to make any meaningful statements concerning Americans specifically,” says Robert Latzman, a Georgia State University psychology professor who worked on the study.

“That being said, I do think the main conclusions with regard to the oftentimes adaptive and functional nature of negative emotions, that is, leading to appropriate public-health-related behavior change in this context, is generalizable.”

So, how do you bridge these differences in public-health messages? Experts suggest finding the right messengers, first.

Humans tend to respond better to leadership and direction from people who are in their ingroups—groups they consider themselves to be a part of—than they do from people in perceived outgroups, or groups of people who are considered to be outsiders. One experiment found, for instance, that respondents were more likely to support marriage equality when they received a pro-equality message from a local pastor rather than from a generic “concerned citizen.”

Soglio suggests that some of the best people to communicate to rural communities are the people who are already there. “The local public health people that are constantly working and dealing with the community” would be ideal communicators, in her view.

Brumage says he’s starting to see real changes in his West Virginia community already. “I have not seen many people in the street at all,” he says. “I think it’s a sign that people are starting to pay attention.” He cites local leadership as one way the message is getting out:

Our newspaper here, the Charleston Gazette-Mail… has full-page ads about social distancing and things we need to do to protect ourselves. On two highways that I just drove on here through Charleston, there are lighted boards here saying, ‘Governor’s orders: stay at home. Essential travel only.’ My feeling is people are getting the message.