We often think of prejudice as a matter of individual choice—but a new study suggests that it can arise among many people in societies facing environmental threats. 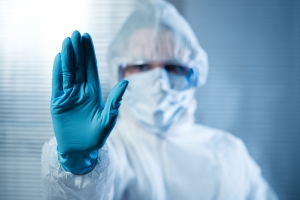 In 2011, University of Maryland psychologist Michele Gelfand conducted a 33-nation study of the differences between “tight” and “loose” cultures. For the purpose of this research, Gelfand defined cultural tightness as “the strength of a society’s norms and the strictness of its punishments for deviant behavior.” Loose cultures are more permissive.

In a new series of studies published in the journal PLOS ONE, Gelfand and her colleagues drew on the insights from that first study to analyze the relationship between cultural tightness, ecological threats, and prejudice against perceived outsiders.

The first study related the findings on tightness and looseness to results from the World Values Survey, which asked participants whether or not they were willing to live near people from a different race or religion, immigrants, people who spoke a different language, people of a different sexual orientation, or unmarried cohabitants. The researchers found that tightness “robustly predicted prejudice across nations.” Countries with relatively open cultures, like the Netherlands, Australia, and the United States, tended to score lower on prejudice than countries with the highest cultural tightness, like Malaysia and Turkey. (There were some outliers, like Pakistan, with high cultural tightness and relatively low prejudice).

The researchers replicated this study design with U.S. states, finding a similar relationship between cultural tightness and prejudice. States like Arkansas and Mississippi, with the tightest cultures, ranked highest on the scale of prejudice; states like Alaska, Hawaii, and Maine, with more loose cultures, ranked near the bottom in prejudice.

But culture does not exist in a bubble, and it isn’t fixed, either. Culture is formed by social and economic forces, and it tends to change over time. “When cultures of any size face existential threats, like storms, flooding, scarcity . . . not just climatic threats but including the kind of climatic threats that might come with something like climate change, they often tighten,” says Joshua Conrad Jackson, a cultural psychologist at the University of North Carolina-Chapel Hill and one of the study’s authors. In the next stage of their study, Jackson, Gelfand, and their colleagues tested this idea, by investigating whether ecological threats could push societies to tighten up.

Sometimes this new conformity can be positive, Jackson notes. In emergency situations like during a hurricane, you may want your society to obey directives like submitting to an evacuation order or respecting a curfew.

“What we looked at in this paper was the darker side of that dynamic,” he says. “And so, when cultures tighten, when norms and rules get stricter, people tend to orient to existing traditions and they become less trusting of people who are different. The outcome of all this is more prejudice, more discrimination against people who are minorities.”

Across a range of studies, looking at both current-day nations, U.S. federal states, and non-industrial societies, Jackson and his team concluded that “ecological threats such as pathogens, warfare, and resource scarcity predicted greater cultural tightness, and people in tighter cultures were more prejudiced against racial, national, sexual, and religious minorities.”

The researchers also wanted to see if the simple perception of ecological threat was enough to forge the relationship between cultural tightness and prejudice. In an experiment, they asked participants from four countries to describe the most salient threat in their country, giving them a foreign attack or major recession as possible examples, along with an ecological crisis. When compared to control groups, the group asked to think about ecological threats showed greater support for cultural tightness. This tightness then predicted higher prejudice.

The researchers also surveyed both American and French voters in the 2016 and 2017 national elections, looking to see if there was an actual electoral relationship between support for cultural tightness and prejudice, and whom voters chose in an election. They found that “voters who believed their country was under threat were more likely to vote” for Republican nominee Donald Trump (who campaigned on restrictive immigration policies) and far-right French leader Marine LePen (who campaigned similarly). These preferences “could be fully explained by their support for cultural tightness and prejudice.”

This suggests that ecological threats are a major factor in fomenting prejudice and building support for right-wing political candidates, in the United States and abroad.

“The idea is that when people perceive threat (whether real or imagined), it produces a tight psychology, at least temporarily—people in these contexts want stronger rules (e.g., tightness) and begin to also show prejudice toward people who threaten the social order,” writes Gelfand in an email to Greater Good. This has electoral implications, suggests Jackson. “Climate change is leading to an uptick in . . . droughts, forest fires, coral reefs disappearing, and if this continues, then it might actually, counterintuitively, lead to an atmosphere where far-right nationalists find themselves elected more easily than they can now.”

Taken together, this batch of studies published in PLOS ONE show that social prejudice doesn’t just appear from the ether. When cultures feel threatened, they tighten their rules and norms out of the desire to protect themselves—which can unfortunately lead to scapegoating people who are deemed “outsiders.”  This means that our leaders and news media should both be very careful about how they discuss threats, ecological and otherwise. Failing to do so could mean that we end up targeting the wrong problems—to everyone’s detriment.