It’s Teacher Appreciation Week! That must be awesome for teachers, right? To find out, I asked some of them.

“Some years I get nothing,” says Mindy Geminder, who has taught at Washington Elementary in Berkeley, California, for more than two decades. “It often depends how much the families can pool together, whether the PTA parent liaison is organized or thinks of this.”

OK, so maybe it’s not the national week of celebration it ought to be. And though the National PTA certainly meant well by creating it, making Teacher Appreciation Week the first week of May might not have been the best choice, according to Heather Henderson, a high school literacy coach in Central Florida. She explains:

By May, teachers have taken heat from the school board, anybody running for an elected office, a school’s administration, parents, and students. We’re slogging through testing hell but there’s still a month of actual instruction to go. Evaluations needed to be completed, supplies have dwindled, creativity is shot, and the children are squirrelly.

Given these working conditions, is a Starbucks gift card really going to make teachers feel better about their jobs and themselves?

Actually, many teachers told me they like the gift cards. “I once got $15 for a bakery and was happy every time I got to get a scone for free,” says Liz Scarboro, who also works at Washington (where my son attends fifth grade). Of course, gift cards can go horribly wrong. One Oakland teacher, for example, questions the wisdom of giving her something from Victoria’s Secret. “Like, why are you thinking of me there?” she says. “I don’t want to think of that kid and lingerie.” 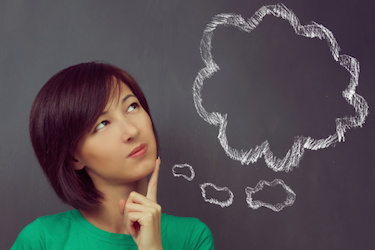 Done right, though, even a little appreciation and gratitude can go a long way.

Robert Emmons, a psychologist at UC Davis, has conducted a series of studies that find exchanging gratitude and appreciation can help people to thrive during stressful periods. A 2013 survey by the John Templeton Foundation shows that hearing “thank you” at work increased employee motivation—but it also found that the workplace is the domain of American life where people are least likely to hear and express appreciation. That’s too bad, because “thanks” is a word that bonds people together and helps generate meaning in their lives.

Of course, people actually feel and express quite a lot of gratitude toward teachers, given the reminder and the opportunity. When the Greater Good Science Center partnered with the nonprofit GreatSchools to build a Gratitude Gallery, where people could express thanks to a teacher, principal, or another member of their school’s community, we witnessed an outpouring of appreciation. Nearly half of the households in the United States use GreatSchools to post or read reviews of their school, and when we prompted parents to add some gratitude to those reviews, we saw thousands of appreciative posts come in from around the country.

“I want to say thank you to the upper school teachers for mentoring and supporting my student during his young adult years,” wrote one parent from South Carolina, “giving him the ability to grow, take risks, and build confidence while developing a strong academic background to move on to college.”

So how can parents and students inject those feelings of gratitude into Teacher Appreciation Week—and every other week during the school year? Gift cards are nice, but what else can a community do to let teachers know we recognize their sacrifices and strengths? Here are three suggestions.

1. Appreciate the person, not the position 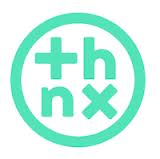 “After feeling ill-used and beaten up, it’s so disheartening to receive a roll of Life Savers telling me I’m ‘worth a Mint!’” says Henderson. “The apple key chain emblazoned with ‘Teachers Touch the Future,’ or worse, ‘We Appreciate Our Teachers!’ doesn’t cut it. Saying it doesn’t make it true.”

The trick, it seems, is to pay attention. Teachers must give a lot of themselves on the job, providing superhuman levels of patience and understanding to students and parents alike. They are also expected and encouraged to bring their own personal strengths and passions to the job—and most do, above and beyond the call of duty.

Thus the greatest appreciations a teacher can receive are ones that recognize their individual motivations, assets, or even just hobbies and tastes.

“One of my doctoral students got me a big bowl of oranges when she graduated,” says Cindy Pury Sandstrom, who teaches psychology at Clemson University. “I love oranges and eat two, sometimes three, during the work day. It was the most thoughtful gift from a student, because she had taken the time to notice what I do and what I like.”

Teachers also seem to like gifts that reflect appreciation for what teachers put up with—which often provides an opportunity for humor. An anonymous teacher received a bottle of wine with the kid’s picture on the label, with a note that said, “My child might be the reason you drink.” One mentions that a parent used that line “before buying me a drink at a school fundraiser.”

2. Write a letter or make a speech

Many teachers say the sweetest gifts they’ve received came in the form of letters.

“I had a dad sit down and write a heartfelt email about what I meant to his family and the impact I had on his child’s life,” says Renee Perez, who teaches first grade in San Jose. “Sounds corny, but it totally brought me to tears!” 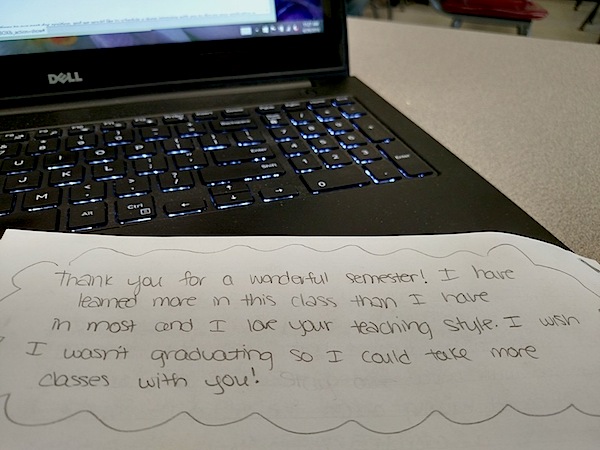 A letter of appreciation from a student to UMass Amherst professor Linda Tropp. “Notes like these mean a lot,” she says.

Of course, you don’t need to restrict this kind of appreciation to one week out of the year. A father emailed Minnesota teacher Abbie Kaufenberg throughout the year to say “when his kid was particularly excited about something that happened in school.” This was especially important to her because most parents only send emails when they are upset about something. “Getting a positive email from time to time really helped me get through my year,” she says.

And parents and kids alike can express their appreciation in a way that is more public than letters.

“Best year was when I had three room parents who got almost all the parents to come in on the last day and surprise me, with gifts and flowers, with very kind speeches and notes, all in front of the kids,” remembers Mindy Geminder. “That, I won’t forget.”

3. Volunteer in the classroom

As Henderson’s comment suggests, May can actually be a tough month for teachers—and it turns out they’re grateful for some help in the classroom.

Our school does a brunch where they allow us 20 minutes of yard duty free time to eat together, which is actually an extension of the regular recess. Parents volunteer to do yard duty for that time. Even better is helping me with projects that need to be done in the classroom, whether they help at school or they take things home.

Volunteering also builds community at the school—and spreads gratitude and happiness like beneficent versions of the cold and flu bugs that sweep classrooms every year.

“I was and am most moved by parents who give time or other resources (books, school supplies) for kids who are not their own,” says Liz Scarboro. “There is nothing like a parent who observes kids who could use adult attention and moves toward them. I’m grateful for that every time I see it.”