Americans are very grateful and they think gratitude is important—they’re just not very good at expressing it.

That’s one of the conclusions from a national survey on gratitude commissioned by the John Templeton Foundation, which also funds the Greater Good Science Center’s Expanding Gratitude project. We’ve stressed the importance of gratitude for years, as more and more research reveals its benefits. But we don’t really know: How grateful actually are Americans today?

That’s why Templeton’s new survey is so significant. The polling firm Penn Shoen Berland surveyed over 2,000 people in the United States, capturing perspectives from different ages, ethnic groups, income levels, religiosity, and more. Their results provide an unprecedented snapshot of gratefulness in America.

Gratitude was enormously important to respondents—and these numbers suggest that people see themselves as having lots to be grateful for, that gratitude is coming from a place of generosity and humanism, and that feelings of gratitude arise effortlessly and often. Even so, people think about, feel, and espouse gratitude more readily than expressing it to others. This might be why respondents also felt that gratitude in America is declining.

How important is gratitude?

When do we feel grateful?

The survey tapped into two different aspects of feeling gratitude, asking what kinds of experiences elicit gratitude as well as how strongly and often people feel grateful.

The results so far show that gratitude is very important to Americans, and that they actively feel grateful for what they have. But how often, and in what circumstances, do people actually say thanks? The results reveal more evidence for a phenomenon sometimes called the gratitude gap—given how often they feel it, and how important they think it is, Americans do not express gratitude very often.

How does age affect gratitude?

To explore whether gratitude trends are changing, people were asked to rate their own gratitude over time.

The rise and fall of gratitude 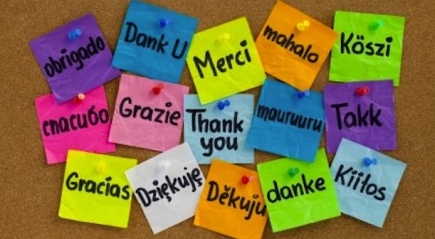 The upshot? This poll suggests that people think their own gratitude is increasing, while everyone else’s is going down.

The good news? This is impossible, and likely due to a well-documented bias: we’re better at noticing and tallying what we personally do than what other people do. It may also be the case that Americans have simply gotten worse at expressing gratitude to each other. According to the data, most of the people surveyed are feeling more grateful today, and only lack in their tendency to say “thanks”—despite knowing that expressing gratitude can bring more happiness, meaning, professional success, and interpersonal connection into their lives.

These data suggest that the Greater Good Science Center is on the right track with programs designed to promote gratitude and help people to become more skilled in expressing gratitude, such as how-to articles or Thnx4.org, our interactive gratitude journal. The poll also provides a useful baseline against which future polls can be compared to assess the impact of generational shifts, gratitude interventions, cultural movements, and other contextual influences on gratitude. The numbers so far tell a promising story—and point to where we might work to improve.

Read the full results of the survey in PDF format.