According to recent research, gratitude in organizations is important—for starters, it can boost morale and increase productivity. However, some evidence suggests that it’s less likely to be expressed or felt in the workplace than anywhere else.

To learn more about this dynamic, the Greater Good Science Center developed a quiz that measures the level of gratitude in an organization, in consultation with researchers from our Expanding the Science and Practice of Gratitude project and Kim Cameron of the Center for Positive Organizational Scholarship at the University of Michigan Ross School of Business.

Roughly 600 people have completed the quiz so far (which is one-third the number of people who usually complete our quizzes by this point in its lifespan—an interesting finding in and of itself).

About thirty percent said they were from outside of the United States; the rest were scattered across the U.S., with the biggest representation in the West Coast and Midwest. Also, though the respondents hailed from diverse organizations, nearly half worked in a for-profit business office.

Here’s what we learned about how Greater Good readers see and experience gratitude in their organizations.

The type of organization predicted how much gratitude people perceive in their organization. 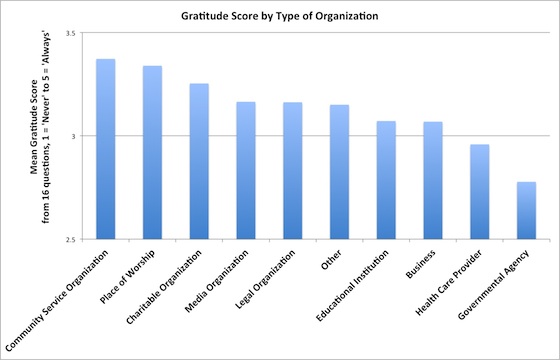 Though many organizations had similar levels of gratitude, community service organizations had the highest—significantly greater than businesses, health care providers, and governmental agencies (the latter two had the lowest scores).

“This result is consistent with other findings showing that the opportunity to make a meaningful contribution is associated with elevated gratitude,” notes Kim Cameron in an email commenting on the results. “Contribution trumps receipt of rewards.”

In other words, perhaps community service organizations are more likely to make their members feel like they’re making meaningful contributions to society, which enhances expressions of gratitude.

Position in the company matters.

Interestingly, the perception of gratitude in an organization declined with age—except if the respondent was in a high-level position, or an executive of the organization.

“It also may be the case that the loss of opportunity to move up or look forward to better positions in the future diminishes gratitude,” Cameron speculates.

In other words, young people in low-level positions may hope to be promoted and eventually become a significant contributor. As people age, they may realize that the possibility to advance is no longer possible—and their perception of their organization declines as a result.

It seems likely that environments high in stress are also environments with tight deadlines, so feeling like they’re short on time could hinder people from pausing to express gratitude. On the other hand, the effect could run in the opposite direction: Less gratitude could lead to more stress. People with high volumes of work may have a harder time coping if they feel that their hard work is not recognized.

How to spot a grateful organization

While it seems likely that some parts of the country and world would be more likely to express gratitude than others, from our analysis geography did not significantly predict the perception of gratitude within an organization. Gender and ethnicity also seemed unrelated to one’s perception of organizational gratitude.

Taken together, the results of this quiz suggest that an organization where the opportunity to contribute is great, and stress levels are low, is a place where people perceive and receive gratitude.

In order to foster gratitude across an organization, it may help to maximize opportunities for people in low-level positions to make meaningful contributions, and ensure that their contributions are recognized—especially for employees who have been in a low-level position for many years. It may also be wise for organizations with high levels of stress to bring more awareness to how often—and to whom—expressions of gratitude are granted.

Feel like your organization could use some more help? Here are five ways to boost gratitude at work!