We all know gift giving is an essential, ritualized part of the holidays. But what about the rest of the year?

There’s good reason to practice generosity even after you’ve greeted the New Year. As we’ve reported in the past, giving activates parts of the brain associated with pleasure and social connection; releases endorphins in the brain, producing a “helper’s high”; and provides many long-term health benefits.

But we aren’t always as giving as we could be. Fortunately, Greater Good has published dozens of articles on how to foster generosity in children, institutions, society—and within ourselves. Here are seven top tips, culled from the archives, for encouraging people to give all year round.

1. Communicate the value of giving. As Christine Carter writes in her Raising Happiness blog, “Research suggests that altruistic children have at least one parent … who deliberately communicates altruistic values to their kids.” The same observation applies to political, business, and nonprofit leaders, who can make a difference by talking about the value of giving and sharing.

Not all the communication need be verbal. As Jason Marsh reports, researchers at the Max Planck Institute for Evolutionary Anthropology found that toddlers exposed to photos of dolls facing each other were much more likely to help a researcher who “accidentally” dropped sticks than were kids who saw the dolls alone or facing away from each other. This suggests that even small visual cues can help children act on their natural inclination to help other people. 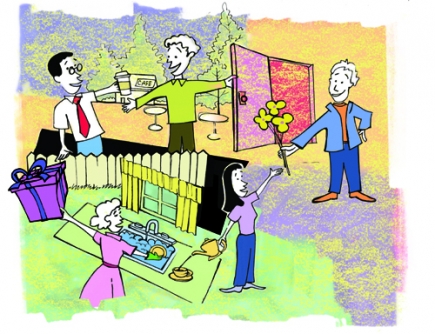 And the same observation applies to adults as well: Many studies have found that ‘priming’ people with a single word, concept, or image can affect their behavior in positive ways. Consider that next time you’re designing a brochure, an office party, or play house!

2. Provide models of giving. It might not surprise you to learn a great deal of research finds kindness to be contagious. One 2009 study, for example, found that 10 to 15 percent of people in a given group emerge as “consistent contributors” who donate to nonprofits—and those people inspire others to give more than they would otherwise.

In a 2011 study, participants read articles and watched videos about both extraordinary and ordinary acts of kindness—and were then given the opportunity to give money to others or keep it for themselves. “The results show that hearing about these good deeds made the participants more likely to give away their money,” writes Carmen Sobczak, “but only if they had been exposed to an extraordinary good deed, not just an everyday act of kindness.” In his essay for Greater Good, “Wired to be Inspired,” psychologist Jonathan Haidt calls this feeling “elevation…a warm, uplifting feeling that people experience when they see unexpected acts of human goodness, kindness, courage, or compassion.”

3. Get Personal. When natural or manmade disasters happen, we’re sometimes confronted by staggering numbers of dead and injured. But research shows that those abstract figures can actually suppress the instinct to provide humanitarian gifts.

Instead, we should strive to make the loss personal by giving the disaster a face and an individual story. People “typically give more money to causes when they know about individual victims rather than abstract statistics,” writes Naazneen Barma in this Greater Good article, “The Power of One.”

Barma cites some provocative research by psychologist Deborah Small and colleagues, showing that people give more to an anti-hunger charity when they read the story of a single starving girl than when that story is combined with statistics on starvation. “A pitch from a charity or a news article that personalizes suffering or tragedy is the most effective way to get people to care,” says Small. “Finding a way to make people feel a personal connection to victims should increase giving.”

And Christine Carter reminds us that children should not be shielded from people who need help. “Too often we protect our kids from pain and suffering, and in so doing we shelter them from others’ needs,” she writes. “Consider the counterintuitive notion that compassion is a positive emotion strongly correlated with happiness, and provide them with opportunities to feel compassion. Teach kids that this compassion is a gift—it is a way to give their time, attention, and energy to another.”

4. Be status conscious (but not too much). Giving confers prestige and social rank. That’s why museums, hospitals and other nonprofits are sure to publicly thank their donors, even to the point of naming rooms and buildings after the most generous among them. Thus it always helps to make giving look good for one’s social status, a fact confirmed by research.

But status involves some tricky nuances to keep in mind. First of all, it’s not true that the high-status rich give more than the low-status poor—as Jason Marsh reports in “The Poor Give More,” people who have less money or less rank are more likely to share with others. That’s an important thing to tell our kids, and an important thing for nonprofits to remember—that we should, as much as possible, refrain from giving donors an inflated sense of power, and that giving is something everyone can do. The results also remind us that the affluent might need more reminders to share what they have! 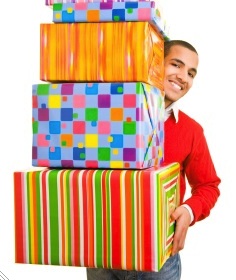 5. Make people feel like they’re connected—locally and globally. In general, people are more likely to give to members of their own kin group, tribe, clan, ethnicity, or nationality—they’re even more likely to help fans of their favorite team over fans of a rival.

But who belongs to our “in-group” has proven to be extremely elastic. One 2009 study found that people from countries with higher levels of economic globalization were more likely to give money to international group and causes—but so were individuals who made a point of watching foreign films or had international friends and experiences. The implication of this and many other studies is that it’s critical to remind each other of our global interconnectedness—a task that starts at home with raising our children to embrace other cultures and connect with their neighbors.

6. Volunteer in the neighborhood. A 2009 study analyzed the relationship between a neighborhood’s support structures, like religious institutions and parks, and the amount of kind, helpful behavior among teens in that neighborhood. Not surprisingly, they found that individual altruism is directly tied to neighborhood quality. That’s another way to give and to increase the amount of giving in your community: Volunteer at youth centers, schools, and churches. You won’t just feel good—you’ll also help build a more giving neighborhood.

7. Say thank you! Probably the best thing you can do to foster generosity is to never let a gift go un-thanked. “Gratitude serves as a key link between receiving and giving: It moves recipients to share and increase the very good they have received,” writes Robert Emmons, who is collaborating with the Greater Good Science Center on our new gratitude project. “Because so much of human life is about giving, receiving, and repaying, gratitude is a pivotal concept for our social interactions.”

The bottom line? If you want to foster generosity, be generous and be grateful. Want to find out if you’re a giver or a grinch? Take our quiz! Want to give to the Greater Good Science Center? Join now!

An impressive list. And thank you for citing studies on the topic. One (psychology) researcher visited our graduate environmental studies program, providing evidence that peer pressure is one of the most important ways to get people to be better stewards of the planet. People who heard that their neighbors used less energy were more likely to reduce their energy usage. To me this falls under the heading of contagion or “setting a good example”.

I wonder though about child versus adult “peer pressure”. When adults set a good example, surely other adults feel obligated to follow; and perhaps kids model each others’ behavior. But when parents show altruism (or drag their kids to a homeless food kitchen) could it possibly be ineffective or even backfire?

Thank you for the citations in this article.I agree that in spreading generosity, it should begin with ourselves. We should walk our talk and become role models in showing gratitude and being generous to our children.