Philosopher-physician Albert Schweitzer once said, “The only ones among you who will be really happy are those who have sought and found how to serve.”

Kate Hanni, 48, a real estate broker in Napa, California, is living proof—emphasis on living. On June 21, 2006, she was lured to a million-dollar home by a man who’d posed as a home buyer, then attacked her when she arrived. For 25 minutes he beat, stabbed, and tortured her, then left her on the floor to die. “My hair was torn out,” Kate says. “The skin on my hands and knees was gone. But worst of all, so was my dignity and my sense of safety in the world.”

Kate’s physical injuries healed over time, but the psychic damage she suffered was lasting and profound. “After six months of intensive therapy,” she says, “I was still afraid to be alone. If no one else was home, I had a panic attack every time I opened my own front door.” 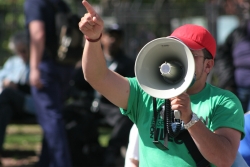 In December of that year, Kate and her husband and sons were en route to a family vacation when their plane was stranded on the tarmac for nine hours, leaving them and their fellow passengers without food, water, or working toilets. “Being trapped on that plane triggered the victimized feeling I’d had since the assault,” Kate says. “All of a sudden I thought, ‘Enough is enough.’ Within weeks Kate launched a website, flyersrights.com, to spearhead the swelling movement for airline passengers’ rights. Within months she’d quit her job and become the executive director of the Coalition for an Airline Passengers’ Bill of Rights—appearing on national TV, being interviewed by every major newspaper in the U.S.

“When I took on this issue,” Kate says, “I’d tried everything therapy had to offer, but I was still a prisoner of my fears. Then I was invited to fly to New York to appear on Good Morning America. Either I was going to face my fears and go, or I was going to miss an opportunity to spread the word.” “I went,” she says. “And I forgot to be afraid. Since then, my terror has been gone.” Kate exhales a long, jagged breath. “Taking on this cause has done me more good than any therapy ever could.”

Kate Hanni’s experience illustrates what doctors and psychotherapists have long observed, and scientists can now explain. People who give to others give healthier, happier lives to themselves.

Whether a person has experienced a life-altering trauma like Kate’s, or suffers from anxiety and/or depression, or is grappling with a garden-variety case of the blues, research shows that those who take “the activism cure” find personal healing in their efforts to heal the world.

The first major study to observe this phenomenon began in 1986, when the National Institute on Aging undertook an ambitious long-term research project. The Americans’ Changing Lives Studies divided 3,617 respondents into two groups: those who did volunteer work and those who didn’t. The researchers surveyed each member of the two groups in 1986, 1989, 1994, and 2006, comparing their levels of happiness, life satisfaction, self-esteem, sense of control over life, physical health, and depression.

Building on that study, researchers Marc Musick and John Wilson at the University of Texas used the same data but focused in on mental health. They, too, found that over time, volunteering lowered depression. “Some of the protection came from the social integration of volunteering,” Musick found. “Volunteer work improves access to social and psychological resources, which are known to counter negative moods.”

Is the “activism cure” all in our heads, or does it work on our bodies, too? Dr. Paul Arnstein of Boston College evaluated the effects of volunteering on chronic pain—and found that volunteering reduced pain and disability. The participants named “making a connection” and having “a sense of purpose” as the sources of their improved health. When they were polled again several months later, the participants reported that their well-being had continued to improve. “The narrow thinking that medications are the only way to control persistent pain,” Dr. Arnstein concluded, “has resulted in a lot of suffering.”

Researchers have discovered a physiological basis for the warm glow that often seems to accompany giving. “The benefits of giving back are definitely biological,” says bioethicist Stephen G. Post, co-author of Why Good Things Happen to Good People. “Contemporary neuroscience has confirmed the connection between the physiological and psychological. We know now that the stress response, hormones, and even the immune system are impacted by, and impact, the pathways in the brain. MRI studies of the participants’ brains revealed that making a donation activated the mesolimbic pathway—the brain’s reward center.”

Citing the findings of an ongoing study sponsored by the National Institute on Mental Health, Post reports, “The mesolimbic pathway of the emotional part of the brain releases feel-good chemicals, triggering a feeling of physical energy. Thirteen percent of people also report alleviation of physical pain. So there really is joy in giving.”

Chief among those chemicals is dopamine, the hormone and neurotransmitter that plays important roles in motor activity, learning, motivation, sleep, attention, and mood. Dopamine reinforces the human urge to do whatever feels good—for better and for worse. On the upside, dopamine encourages us to hang out with people who are nice to us, savor a great meal, head for the hammock on a hot summer day, and do nice things for others.

“When we do good deeds,” Post says, “we’re rewarded by a dopamine pulse. Giving a donation or volunteering in a food bank tweaks the same source of pleasure that lights up when we eat or have sex. It’s clear that helping others, even at low thresholds of several hours of volunteerism a week, creates mood elevation.”

On the downside, dopamine has been implicated in addiction, serving as a flashing neon “pleasure” sign that keeps the addict coming back for more. But addicts, too, can benefit from giving back. “Alcoholics who work the 12th step of Alcoholics Anonymous, bringing the message to other addicts have twice the recovery rate of those who don’t,” says Post.

If you or anyone you know has ever gone through a hard time—in other words, if you or anyone you know is human—you’ve undoubtedly observed that people respond as differently to adversity as they do to flavors of ice cream. Some sail through with confident, optimistic flags unfurled. Others facing a similar situation spend weeks, months, or years flailing in the quicksand of despair.

Experts call this variable the “resilience factor.” Endless research dollars have been spent attempting to unlock its mysteries in hopes of allowing more of us to sail and fewer of us to get stuck in the muck. It’s still not clear what combination of genetics, upbringing, and circumstance makes one person more resilient than the next. But most experts agree that feeling powerless doesn’t help—and that feeling competent and in control does. That’s why Jerilyn Ross, president and CEO of the Anxiety Disorders Association of America, is a proponent of the activism cure.

“When we give back, it shifts the focus outside ourselves,” Ross says. “It creates a sense of satisfaction that increases endorphins and therefore, a sense of well-being. When we’re feeling down, the instinct is often to vent to friends. It’s good to have a support system, but if that’s all there is, it’s hard to get distance from what’s bothering you. Doing things for other people, thinking about other people, is like giving your brain a break from despair.”

Something greater than you

Kate Hanni turned to activism in response to one of the harshest blows that life has to offer. The activist cure works for her. But can activism also help ordinary people deal with the ordinary challenges that render so many of us so unhappy, unsettled, and unglued these days?

Stephen Post is certain that it can. Citing the findings of the Musick-Wilson study, he says, “Even volunteering for two or three hours a week has been found to lower situational depression. One can’t expect this in severe cases, but it doesn’t take a whole lot of activity to create an emotional shift in people who are mildly depressed.”

Maybe someday, physicians and psychiatrists will write prescriptions for charitable donations and citizen action instead of scrips for pills and psychotherapy. But for now, women like Kate Hanni will go on prescribing activism for themselves—and offering sustenance to others in the process.

“Helping others is the best medicine for anyone who has been traumatized,” Kate Hanni says. “I got to face my fears much more effectively than I would have if I’d stayed at home and kept going to therapy. Activism gets you out of yourself and into action. It makes you feel like you’re part of something greater than you.”

For Kate, it’s more than a feeling. Two years ago she was a traumatized victim, unable to work, sleep, eat, or be alone, even in her own home. Today she’s the spokesperson for the national movement of outraged air travelers, named one of the nation’s 25 Most Influential Executive Women in Travel by Forbes in 2008. Once too terrified to travel, Kate has organized events in every major city, founded a rock group called the Toasted Heads (whose signature tune is a version of “We Gotta Get Outta This Place,” suitable for singing while stranded on a plane), and stormed the halls of Congress on a regular basis.

“This cause gave me a purpose for living that’s so exciting,” Kate says. “I wake up and jump out of bed to get started every day. I’ve never felt better.”

Kate pauses. When she speaks again, her voice is somber. “And it wouldn’t have happened if it weren’t for the horrifying events of the past.”