My preschooler offered to share his apple slices with me as we were driving home from school yesterday. In that spontaneous moment of generosity, I smiled and felt heartened; maybe, I thought, he actually is internalizing our conversations about sharing and kindness. 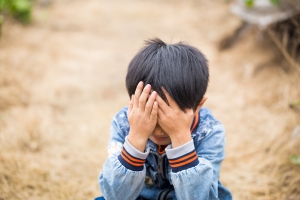 We parents like to try different strategies to inspire kids to be generous, but some new research suggests that sharing may also depend on kids’ moods.

In a recent study, Rui Guo and her colleagues explored how feeling sad affected sharing in nearly 100 five- and six-year-old children living in Northern China. The children were randomly assigned to watch either a neutral or sad video clip from Disney’s The Lion King. In one group, kids watched Simba and his father, Lion King Mufasa, having a daily conversation about the rules of nature. In the other group, kids watched Simba cry when he found his father was dead.

In explaining their sharing choices, boys provided more self-focused reasons after watching the sad video compared to the neutral one. That is, their reasons focused on their own preferences, such as “I want to get more stickers” or “I like him,” rather than other-focused reasons, like “He looks nice” or “It is good to share.” On the other hand, there was no difference in girls’ reasoning after the neutral and sad videos.

“Personal distress may increase children’s attention to themselves, which is supported by the finding[s among] boys,” explain Guo and her colleagues. On the other hand, “when dealing with negative emotions, females employ more interpersonally oriented emotional regulations and seek more emotional or social support than males.”

“This finding indicated that these children have developed egalitarianism and concern for the poor,” explain Guo and her colleagues.

The researchers believe that cultural context might be playing a role here. While one study of young American children found that they preferred to share more with the poor than the wealthy, another study found that Chinese preschoolers preferred equal distributions. Guo and her colleagues write, “Collectivism in Chinese culture encourages people to distribute equally to maintain close relationship[s] with others.”

What do these study findings mean for parents across the world? They remind us that there are different ways to respond to negative feelings, and that we might be raising boys and girls to favor one or the other. Sometimes, negative emotions (like fear) drive us to defensively collect resources and be more cautious in the face of possible threats. But other times, negative emotions (like sadness or loneliness) can prompt us to reach out to others and strengthen relationships.

We can be aware of the different messages we convey to our sons and daughters—both in our words and by our own example—about the function of sadness and the ways to cope with it. For example, because it’s hard to see our kids feeling sad, we may reflexively try to distract them to help them overcome their pain. But sometimes a better approach is to work with them on acknowledging and accepting it.

As for me, I’m doing my best to support my preschooler’s awareness of all his feelings—including sadness. I’ll let him know that when he is sad, that’s the time to reach out to others, giving them an opportunity to practice kindness toward him. In that way, I hope he’ll learn that sadness does not need to make him feel defensive or guarded; instead, it can be an invitation for generosity and connection.